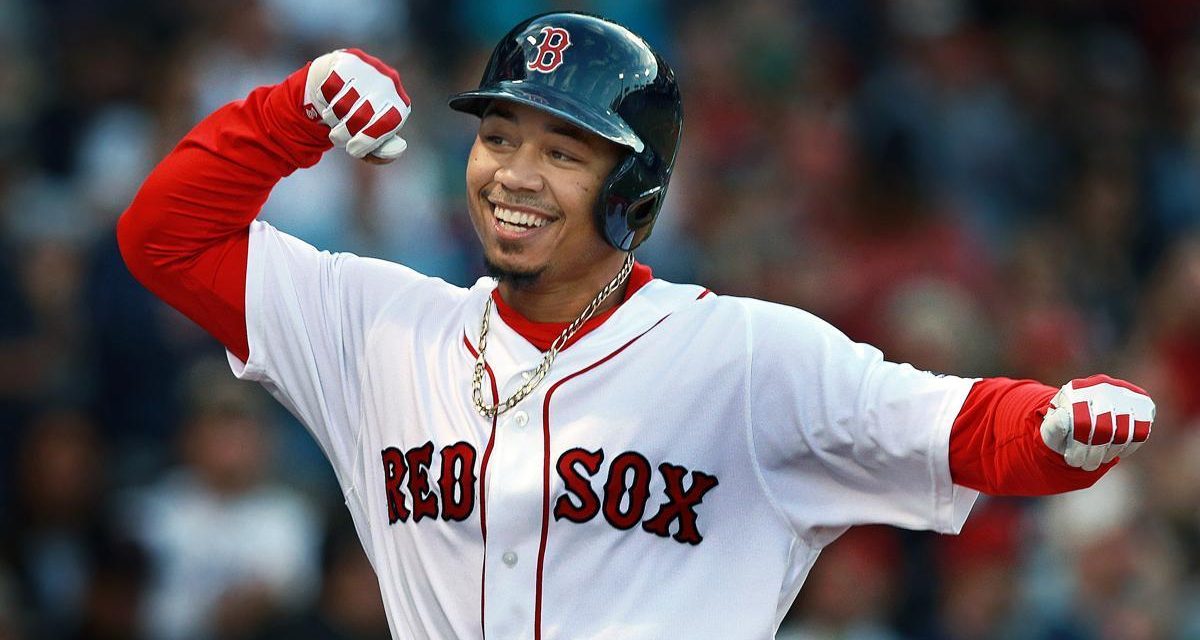 What a night it was for Red Sox Gold Glove right fielder, Mookie Betts on Tuesday. My guy went 3 for 3 with 3 home runs, 3 RBI’s, and led the red-hot Sox to a commanding 10-1 win over the AL West-leading Los Angeles Angels.

Coming into this matchup there was a lot of hype about the Angels new starter, Shohei Ohtani, who in his previous two starts combined for 18 strikeouts with a .80 WHIP and only 3 ER’s on just 4 hits over 13 innings pitched to start the season 2-0.

The 23-year-old from Oshu, Japan was one of the hottest commodities this offseason, and for good reason. Not only does he pitch, but he can hit the ball as well. Over 30 at-bats so far this season, he is batting .367 with 3 homers, 11 RBI’s and a cool 1.191 OPS.

A pretty great start to a season for anyone, let alone a rookie. There has already been a ton of talk about him being a real MVP candidate seeing as how no one else plays both positions like Ohtani has, let alone play them well.

I’ll give the guy credit, he can definitely hit the ball well and so far has pitched pretty well, although it was against the Oakland A’s, who currently sit in the bottom half of the league at 8-10. He hasn’t seen any teams with real talent yet.

To be fair, aside from the Yankees, neither have the Red Sox.

This would be Ohtani’s first real test in the big leagues…and it didn’t go so well. This so-called “Japanese Phenom” got chased from the games after just two innings in which he threw 66 pitches while walking two batters, giving up 4 hits, and three earned runs, including a leadoff homer by Mookie Betts.

Surprise, surprise; the Red Sox chase another “great” pitcher from a game early. This offense is firing on all cylinders even without one of their best offensive weapons, Xander Bogaerts.

The fun wasn’t over there though, the Angels then looked to Bard, who didn’t have much better luck. He gave up 4 home runs on just 6 hits, resulting in 6 earned runs in just 1.2 innings pitched. YIKES.

This Red Sox offense is starting to look scary.  SIX homers from four different players and 15 hits against the second best team in the American League just proves that this team deserves to be called the best team in the AL, if not the entire MLB right now.

Tuesday night was also a historic night for Mookie Betts, as he became just the second player in Red Sox history to have 3 separate 3 home run games as part of the team. The other was arguably the best Red Sox player ever, Ted Williams. Talk about good company to be in.

Luckily for the Angels, they won’t have to face our ace Chris Sale this series, but they did have to face the 2016 Cy Young winner, Rick Porcello.

Rick Porcello, who in his last outing pitched 7 scoreless and had a no-hitter going through 6 innings. In the end, only allowing 2 hits and striking out 6, did a lot of the same stuff last night against the Angels. Big Rick, who now leads the majors in wins with 4 went 6 scoreless innings for the second time in two starts and struck out 6 while allowing 6 hits to help the Sox to another blowout 9-0 win.

Not only did this game continue the trend of high caliber pitching, but the offense continued to tick. Another night, another grand slam from the Sox. This time it was Rafael Devers, who is the fourth different Red Sox player to hit the grand salami this season…it has only been 17 games. *gulp*

Another guy who had a big night was first baseman, Mitch Moreland. For a guy who is being rotated around with Hanley on first, while Hanley rotates with J.D. Martinez at DH, who also rotates into the outfield, he is making a difference when he suits up. Moreland thus far has batted .355, going 3-for-4 last night with a walk, while driving in 4 runs.

After the conclusion of the game last night, the Sox now lead the majors in run differential with a whopping +60, doubles with 50, runs scored with 108, batting average with .287, RBI’s with 101, and OPS with .844. They lead in basically every offensive category except home runs where they currently sit in 7th place with 22, 5 behind the league-leading Colorado Rockies.

Oh yeah and they have the fewest strikeouts in the league with 115, that’s less then Giancarlo Stanton has had so far this year.

Closing out the series last night on the mound was Eduardo Rodriguez, who has been just as formidable as Porcello thus far this season. Rodriguez was 1-0 and has 2 no decisions. In his last outing against the Orioles, E-Rod went 6 innings allowing only 1 run and striking out 8. This starting rotation is almost too good to be true so far this year.

Guess what? The Red Sox absolutely crushed it again last light. Routing the Angels for a third straight game-winning 8-2. Another not so shocking occurrence last night, Mookie Betts hit a leadoff home run. Making that his 2nd leadoff in the last 3 games. Sorry LA, these guys just don’t let up.

With Benintendi smacking his first yarder of the year, and J.D. crushing two separate RBI doubles, the run support was there, and Eddie Rodriguez did his thing. E-Rod gave the Sox 6 solid innings of work, striking out 5 and only allowing 2 runs off of just 3 hits to improve to 2-0 on the season.

To top it off, they currently sit in second in the majors in ERA with a 2.63, 1st in batting average against with .207, and first in quality starts with 15 collectively. This pitching staff is a hitters nightmare and is only getting better by the day.

If the games played so far are a sign of whats to come, the next Sox series against the 9-10 Oakland Athletics this weekend should be a breeze. Will we see another grand slam? Probably. How many runs will they win by? No less than 7. Will the Sox win their 8th in a row and their 16th out of their last 17 games? I hope so.

Now sitting atop the MLB at 16-2, the Sox look almost unstoppable, and they’re not even at full strength. The last 8 games have been without Xander and we have yet to see veteran second baseman, Dustin Pedroia play a single game this season, let that sink in for a second.

When this team is fully healthy the rest of the league should be terrified. They have pretty much manhandled every team they have faced aside from their 2 losses to Tampa Bay and the Yankees.

Now they’re taking down supposedly the best offensive team in the league until the Sox rolled into town and held them to 1 run in the first two games of the series.

Look, I know it’s early and the competition has been lackluster, but I am extremely excited about this Sox team. Off to the best start in the 118-year history of the organization, leading the league in almost every offensive categories, and having lights out pitching night in and night out, this team is undeniably good.

While almost impossible to keep winning at this pace, the longer they can keep this scorching hot streak going, the better. With a comfortable 4 game lead over Toronto and even more comfortable 6.5 over the highly touted Yankees in the AL East, they are setting themselves up with a decent cushion for an almost inevitable slump. Who knows when, or if, that slump will come. For now, I am riding high and enjoying every second of this team absolutely pulverizing every opponent they face and adding W’s to the win column.