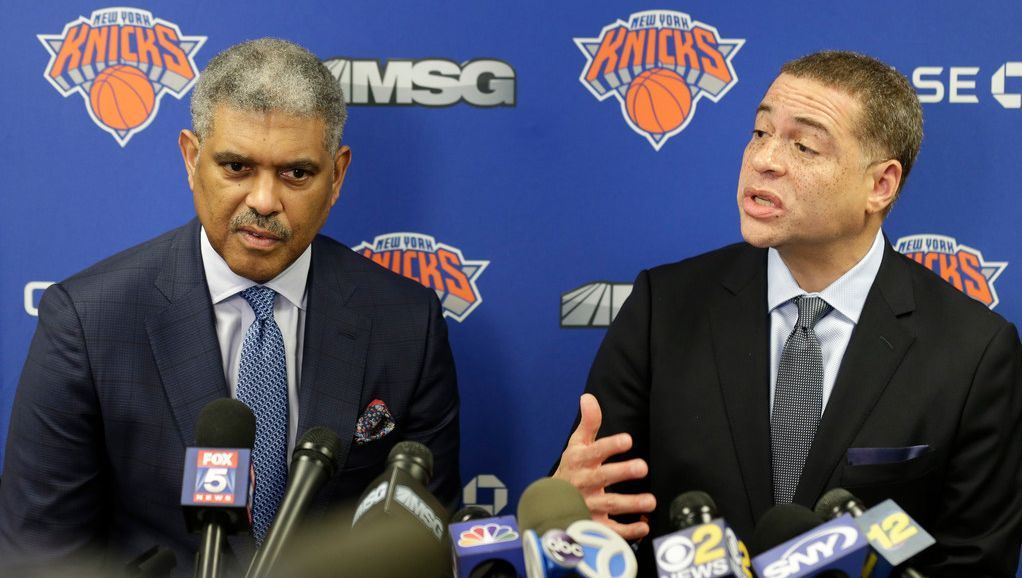 The Knicks fired Jeff Hornacek as soon as the plane landed back in NYC following their last game against the Cavs. A move I thought was a low blow. Hornacek deserved better. They should have at least waited until the next day and had a proper sit-down. It could even be argued Hornacek didn’t deserve to lose his job given the situation he was thrown into. Having to deal with the turmoil around Phil, the mess with Melo last year and the revolving door in the front office was never a formula for success so looking back, Hornacek was doomed from the start.

He brought a team this year, who at the start of the season was bound to be one of the leagues 5 worst teams. Before losing Porzingis, their franchise cornerstone to an ACL injury, the Knicks were competing for a playoff spot. That was a feat in itself. I thought he did a solid job of developing young players, everyone from KP to Kyle O’quinn to Frank Ntilikina.

The fact remains, here we are again, the Knicks with another season of missed playoffs and another coaching search. The 13th head coach since James “Rat Faced” Dolan took over the Knicks. With a number of names being tossed around, it seems to this point that there’s a list of seven on the Knicks initial list. So let’s run through them and see who the best option could be.

This is probably the most perplexing name on the list. Woodson was here before and to me didn’t do anything impressive. Yes, he had a 54 win season, but it seemed like a fluke. They surrounded iso Melo (whos one of the best passers in the league out of a double team) with three-point shooters and savvy veterans. They were an early playoff exit to a less talented Indiana team. I know Woodson is close with Steve Mills, so that’s why there’s consideration here, but this is not a reunion the Knicks should be pursuing. There are rumors of Woody coming back as an assistant with another name on this list, but we’ll discuss that when I get there.

This name has surfaced lately as more of a legitimate choice since Budenholzer turned down the Suns interview. It’s being reported that he covets the Knicks job more than anything. I think this would actually be a sound hire for the Knicks. Budenholzer is a very good, highly regarded coach. He’s a direct descendant of the best coach in the NBA today, Greg Popovich. He runs a tight ship on defense and has shown strength in developing young players. Two things the Knicks brass is claiming as at top of the list in their search.

He lead Atlanta to 60 wins before ownership blew up the team and entered a full-blown rebuild, something he clearly didn’t want to be a part of. The Knicks are rebuilding, but make no mistake about it, they are miles ahead of the Hawks. I expect Budenholzer to get a bunch of consideration for the job and maybe even land it. He wouldn’t be my pick, but I would be far from upset if he ended up as the head coach.

David Blatt may have been dealt the worst hand of any coach I’ve seen in my life. Taking a team to the NBA finals, 60 wins and on pace to be in that range the following season is fired for that BUM of a coach Ty Lue. All because LeBron has the emotional stability of a 14-year-old girl who just got dumped by her first boyfriend. Blatt is another great coach whos highly regarded in both hemispheres. He’s got a proven track record in the NBA and with youth development overseas. With the NBA taking on more European players and tendencies, similar to Budeholzer, despite not being a sexy name, would still be a sound hire.

Jerry Stackhouse is currently the coach of the Toronto D-League team, where he’s done a great job, but he’s still a little too green for this job. The Knicks head coaching job shouldn’t be your first. It’s not for the faint of heart or inexperienced. Apparently its not for the experienced either, given the track record, but it’s just not time yet for Stackhouse, given the stage of his coaching career and the Knicks rebuild moving forward. His best attribute is being able to identify with players, but other coaches on this list can provide that as well, all while doing other things more effectively. Might be a great coach someday, but not for this team and not right now.

Now start the real sexy names. Mark Jackson has been touted as a possibility the last three times the Knicks were searching for a new head coach. The old-time Knicks fans remember Jackson’s early days as the St. Johns star turned Knicks starting PG. But he’s really a Pacer guy. Jackson to his credit built the current dynasty that is the Golden State Warriors, at least the Roster that is. He won 50 plus games with them, but it wasn’t until Kerr arrived that they got over the hump and won a title.

Jackson was fired for reportedly being impossible to work with. So much so that they had to change certain coaches roles within the organization just because Jackson couldn’t get along with them. He was also criticized for the assistant hires he made. Anyone who knows NBA coaching knows the ability to pick a great staff is just as important as being able to coach yourself.

There’s a reason he was let go after winning 50 plus games and a playoff run, that was no accident. Those are real red flags to me. If Jackson cant get along with the easy-going guys out in silicon valley, how do you think he’s gonna handle turmoil in New York City under James Dolan? Not well at all, is my guess. I wouldn’t be devastated if Jackson was hired, hoping he’s learned from past mistakes, but even then he’s probably 4th or 5th on my list.

Vogel was a fantastic coach in Indiana, it was simply time for a change. He was doomed in Orlando from the start, with a terrible cap situation, an even worse roster, and incompetent ownership. The Knicks should have hired Vogel two years ago instead of
Hornacek in my opinion, but here we are. Vogul is a great defensive coach and he did show some signs of improving young talent in Aaron Gordon the past two years.

Vogel is a New York guy who I’m sure would covet the job if offered. He recently said he was stunned he wasn’t offered the job in 2016 over Hornacek, a feeling I shared. This time it seems more right though. The Knicks have a more clear direction and one that fitVogel’sls coaching style and abilities. If he can prove to them he’s the right guy to develop young talent and most importantly can make Krsitaps Porzingis happy, he would be an exceptional hire. One i would applaud along with the vast majority of Knicks fans. I think he’ll be one of the final two choices again, there’s significant reported interest on both sides, yet again.

While Vogel would be a phenomenal choice, Fizdale is my pick here for the Knicks to hire. He’s the best available coach on the market and is understandably desired by nearly every team with a vacancy. This is one area where the Knicks hold the advantage, money. As the league’s most valuable franchise and coaching salaries not affecting the salary cap, they can toss a virtual blank check at Fizdale, something they should at least consider doing. He’s regarded as one of the best coaches on earth by nearly everyone you speak to. He’s adored by every player who has ever suited up for him (besides Marc Gasol apparently), including LeBron James.

Fizdale is a great mind both offensively and defensively. He’s shown great player development. Many people think he’s a ground and pound type of coach since that’s the style they saw in Memphis, but he was really just playing to the strengths of the players he had, specifically Gasol and Randolph. The offense he helped build in Miami is a testament to his versatility as a coach.

As I mentioned above, Woodson has been rumored to be a possible assistant coach for Fizdale if he’s hired. This move i would love. I think Woodson can still bring tremendous value to a staff, just not as the Knicks head coach.

That many talented and respected people don’t sing your praises for no reason. Fizdale has earned his reputation and is the guy the Knicks should be going after the hardest. Sur, they’ll have competition, but they also have Dolan’s bank account. I know there’s been worry about his relationship with European Star Marc Gasol, which eventually got him fired, but that doesn’t concern me. It was more than likely Fizdale hitting Gasol with some truths about his game and Gasol not appreciating it.

Hire Fizdale, he’s the total package. If it doesn’t work out, there won’t be anyone who can say you make the wrong choice at the time.