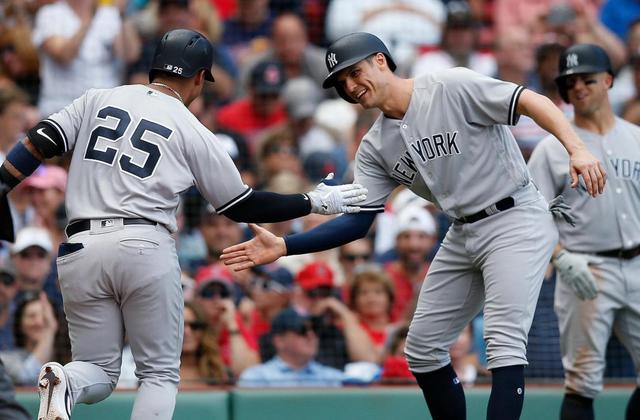 For as long as I can remember, I have had a deep-rooted hatred for the New York Yankees.

Mainly because for a long time, they owned the Red Sox and had won five times the championships my team had won.

One of my first real sports memories was Aaron Boone going yard in the 11th inning of game 7 to win the ALCS in 2003, a game where the Sox had a four-run lead and Pedro Martinez on the mound.

Grady Little’s decision to stick with Pedro in the 8th inning when the bullpen had been so reliable was a decision many people still question to this day. However, losing in ’03 made the 2004 comeback from being down 3-0 in the ALCS that much sweeter.

The Red Sox and Yankees have not met in the playoffs since that historic comeback in ’04. A playoff matchup between these two AL East rivals is long overdue.

Not to mention the fact that this is a year where both teams had amazing regular seasons. Although it may not feel like the Yankees had a great season because they finished 8 games out of first place, they still won an incredible 100 games.

They had the 3rd best record in baseball and made history with their 100th win as it was the first time that three teams have won 100 games in the same season.

It doesn’t seem fair that a team that had the 3rd best record in all of baseball, and more wins than any National League team has to play a one-game wild card in order to make the divisional series, but that’s just the way she goes.

Regardless of my feelings towards the Yankees, this playoff matchup needs to happen.

I know what you’re probably thinking, “Tommy Buns, the Yankees have one of the best offenses in baseball, they hit the most home runs ever, and their pitching has been one of the only groups to shut down the Sox this year,”.

Well, good. If you wanna be the best you have to beat the best and no offense to the A’s, they have had a spectacular season and shocked everyone by winning 97 games, but they are not the Yankees.

The Bronx Bombers won 100 games after not having Aaron Judge for over a month of the season, which coincided with a huge slump for Giancarlo Stanton. Along with their offensive struggles, this was a time that also saw their ace, Luis Severino, look like he forgot how to pitch for about 7 starts.

There is absolutely no denying that this Yankees team is worthy of winning a World Series title. They hit an MLB record 267 home runs, finished second in team OPS with .781, and second in total runs scored with 851.

A large reason for these numbers has been their standout rookies, Gleybar Torres and Miguel Andujar.

In 149 games, Andujar batted .297 with an impressive 27 home runs and 92 RBI. He has also been a reliable third baseman and has cemented himself as a household name in the Yankees organization.

Gleybar Torres, the other young stud on the Yankees, has held it down at both second base, and shortstop while Didi Gregorius was injured. He also was a force at the plate, hitting 24 homers, and 77 RBI, while batting a solid .271.

We also can’t forget to mention the big man, Aaron Judge. Even after missing 50 games this season, he still hit 27 home runs and had a .920 OPS. Combine that with reigning NL MVP Giancarlo Stanton batting in 100 runs and hitting 38 homers, this offense is stacked.

Although it wouldn’t be easy, beating this Yankees team would be a major accomplishment in this already historic season. Unfortunately, it would come in a 5 game ALDS thanks to the new wild card set up.

That’s the only thing that would be bad about it. It just doesn’t feel right that these two wouldn’t play a best of 7 in the ALCS, but it would still be a playoff matchup of the best rivalry in all sports.

Many people called the Yankees the favorite to win the World Series coming into this season, and to be honest, they have as good of a shot as anyone.

With that being said, I want them to win the Wild Card and be the ones squaring off with the Red Sox in the divisional round.

I want to be the ones to send them packing. I want David Price to shut up all the haters and dominate the Yankees in game 2 in Boston. I want this offense to prove everyone wrong and make a deep playoff run and break the streak of first-round playoff exits.

Nothing would be sweeter than taking down the evil empire en route to a World Series title.

Make no mistake, in my heart, I absolutely hate the Yankees, always have and always will, but I have no choice but to respect them and acknowledge that they are a formidable opponent and would be arguably the toughest test of this years playoff run.

It just feels like both the Red Sox and the Yankees are too talented to not meet in the playoffs.

So come Wednesday I will swallow my pride and silently hope that the pinstripe gang can hold off the surging Oakland A’s and take the ride to Boston for Game 1 of the ALDS on Friday and if they do you better believe my boys will be ready.