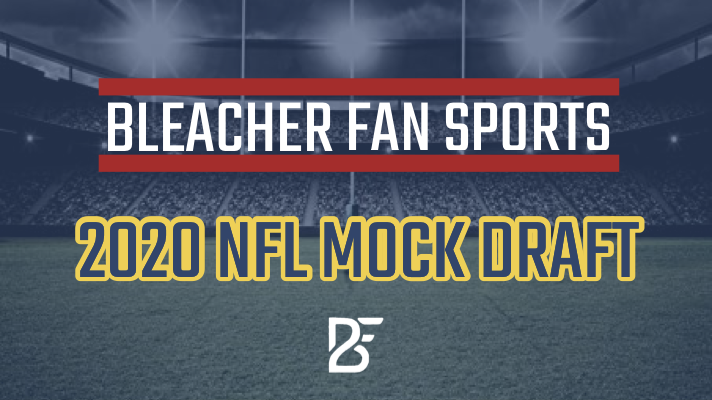 Bleacher Fan Sports brings you our 2020 NFL Mock Draft. Jones, Sully and Tommy Buns split up the teams evenly and took control of the form office for their first-round picks. Below you can see who had which teams.

The Skins can’t mess this up, can they? Young is the best prospect regardless of position in this draft and is an athletic beast at 6”5 260. Think Nick Bosa last year and possibly better. No way they draft QB after trading for Kyle Allen and drafting Haskins last year (Alex Smith still on the roster as well).

The Ohio State cornerback snagged three picks and had 30 tackles in the 2019 season. At 6’1” and 205 lbs with a 4.48s 40 time, he is exactly the type of DB the Lions could use to bolster their secondary and would be a great addition to go along with safety Duron Harmon coming over from New England and cornerback Desmond Trufant.

The Giants most definitely have a major need at offensive tackle, and they’ll consider it here, but Isaiah Simmons is a special prospect. One of the greatest athletes the NFL Combine has ever seen, Simmons can play anywhere on defense, literally. He took snaps at EDGE rusher, linebacker, safety and cornerback last season at Clemson. O-Line is needed, but Simmons is too good of a prospect to pass up on with a defense that was one of the league’s worst last season.

The Dolphins have quite the dilemma on their hands here. Draft Tua, who if not for the injury, would possibly be the No. 1 pick, or go for Oregon QB Justin Herbert. After all, even if he isn’t healthy, Ryan Fitzpatrick showed he can certainly hold his own for this year until Tua is ready to take the reins.

Easy pick here, Chargers need a quarterback for the future after the split with Philip Rivers. Burrow and Tua will most likely be off the board so Herbert is the obvious best option. Herbert threw for just shy of 3,500 yards and had a 32:6 TD to INT ratio. No brainer for the Chargers on this one.

The Panthers had the worst run defense in the NFL last season and lost multiple defensive starters to free agency this offseason, including Gerald McCoy. Interior D-line is their biggest need and Derrick Brown is the best interior lineman in the draft, hands down. No brainer here for Carolina if he’s on the board.

This pick depends on whether the Giants take him at four, which is possible, but not likely, in which case Auburn star interior d-lineman Derrick Brown would be the choice here. But the Cardinals will be thrilled with Wirfs took to protect their new franchise QB Kyler Murray’s blindside. Wirfs has the highest ceiling of the four OT’s but possibly the lowest floor as well.

Defensive Tackle is a huge hole for the Jags with Abry Jones and Taven Bryan as their top two DT’s they need help baaaaaaaaaaaad. With Derrick Brown being scooped up at No. 7, Kinlaw is the best option by far. 35 total tackles and 6 sacks in 2019 made him a huge asset for South Carolina and do a lot of the same for Jacksonville.

The Browns did a good job fixing a lot of holes in free agency, but one that remains is at left tackle. With an offensive line that hindered them immensely last season, grabbing the monster in Becton here is a perfect move to protect Baker Mayfield for years to come.

I pray the Jets don’t take a WR but if one thing is clear it’s new GM Joe Douglass’s commitment to protecting Sam Darnold. He’s added five new linemen thus far and this pick would give the Jets a complete overhaul of that horrific O-line. The Jets could also use a WR which is why Jerry Jeudy is so tantalizing here.

Vegas has big needs at both cornerback and wide receiver, but with Okudah off the board here and C.J. Henderson being a bit of a reach at this spot, it’s time to grab the best wideout on the board in Jeudy.

This pick is from unloading Deforest Buckner via trade to the Colts and could go towards his replacement in Javon Kinlaw and would be a much cheaper option. However, I think they add a stud WR something they desperately need after the departure of Emmanuel Sanders to the Saints. Jeudy is gone at this point, Bama speedster Henry Ruggs III is also an option, but they have a similar type of burner in Debo Samuel, I think they go with the physical red-zone target in Cedde Lamb from OK.

Tamp Bay will be absolutely thrilled if they can get one of the four top OL prospects and Thomas fits that bill. Pretty much everybody has the four ranked in different spots, so Thomas is great value here at 14. The more teams that trade ahead of them for one of the three coveted WR’s the better the chance they can land one of the four.

Everybody knows John Elway loves the quarterbacks with the rocket arms. Well, now he’s got one in Drew Lock, so why not get a wide receiver that not even he may be able to overthrow? It’s a need and Ruggs fits the offense.

The Falcons did a bit of reshaping to their roster this offseason releasing Devonta Freeman and Marcus Trufant as well as letting pass rusher Vic Beasley walk to the Titans. Fortunately for them, they’ve also added Todd Gurley and Dante Fowler who’s a tremendously talented pass rusher in his own right. Still, they need another edge as they were 22nd in sacks last year and Chaisson is a quick and dynamic athlete that can rush the QB.

95 total tackles and 3 picks in 2019 at Alabama, it’s clear McKinney can compete with the best talent in college football. McKinney could fit in nicely in the secondary and create a great safety combo with the newly acquired Ha Ha Clinton-Dix.

One of the biggest keys to offensive success is a strong O-line that opens up the run and forces teams to respect the play-action. Josh Jones would surely help Miami’s lackluster lineup at OT. Already having likely taken Tua at No. 5 this would be another good move looking further down the line for the Dolphins.

As I mentioned earlier, the Raiders still have a need at cornerback, but I’m gonna make a splash of sorts here. It’s no secret Vegas is souring on Derek Carr. Although, he’s still got three years left on his contract, so they have the wiggle room to take in a guy like love with huge potential, but will need some time.

After trading Jalen Ramsey it was obvious a DB would be a priority for the Jags in the draft. Fulton defended 14 passes and had 31 tackles in  LSU’s National Championship campaign and was a big part of the Tiger’s defensive success. He also has great speed, clocking a 4.46 40-yard.

The Eagles lost WR Nelson Agholor in free agency to the Raiders and Philly fans could not be happier, but they still desperately need a WR. There’s still a chance the off-injured and aging Alshon Jeffrey could be traded by or during the draft. Jefferson is a slam dunk for GM Howie Roseman if he’s available as the junior scored a whopping 18 TD’s last year and in the SEC albeit.

The Vikings are in the same spot as the Raiders, both having needs at wide receiver and corner (among other things), with two first-round picks. After losing three members of their secondary in free agency, cornerback is the move here, especially since Henderson took the fall to this spot.

It’s no secret that it is officially a major time of transition for the Patriots. No more Tom Brady, the defense lost some major pieces in Harmon and Van Noy and it’s not clear what the plan is to find a successor for TB12. I think the Pats look to try and find a replacement for Van Noy at linebacker. Murray had 95 tackles and 4 sacks in his Junior year at Oklahoma and has the potential to be a staple in the New England defense for years to come.

Before getting Emmanuel Sanders I probably would have gone WR here, but things have changed and now I think they’ll target a CB with their first pick. The way things have shaken out in this mock I see them going with Diggs out of Alabama. Most mocks don’t have him going until early round two, but I could definitely see the Saints going for it here. Diggs grabbed 3 picks and recovered 2 fumbles in 2019 to go along with 37 tackles.

The Vikings solve their second need here just three picks later by grabbing the Baylor speedster. He has similarities to Stefon Diggs and could slide right in perfectly to this Minnesota offense.

Miami is in a great spot this year with three first-round picks and I don’t think any will be wasted the way we have this shaking out. Epenesa is a stud of an edge rusher and with his 4 forced fumbles and 49 tackles in 2019, Miami would be lucky to scoop him up at 26.

This is one of the toughest picks to predict not only because it’s a late first-round pick, but also since Jadevon Clowney is still an unrestricted free agent. Reports are he’s not returning to Seattle, but that could change very quickly with how little interest he’s garnering. Let’s stick with what we do know; the Seahawks need O-line help and Wilson has needed to bail them out far too much. They added Brandon Shell from the Jets, who’s nothing special and lost their sixth lineman which they often use in George Fant to the Jets. Austin Jackson might be a little early here and he’s still very raw. If they want versatility on the line they can go Cesar Ruiz from Michigan who plays both center and guard.

It’s very much possible the Saints take Queen with the 24th pick as some believe he’s the best linebacker in this draft behind Isiah Simmons. Queen would help fill the void of CJ Mosley’s departure to the Jets from a year ago. If the LSU Tiger is off the board it’s very much possible they address one of their other weaknesses; a big body on the outside such as WR Tee Higgins from Clemson.

This solves a need for the Titans who have put a concentration on defense recently. Gross-Matos is an athletic freak and went up against some of the best offensive lineman in the country in the Big Ten. As long as he’s not the focus on defense (which he won’t be) he’s got the chance to have some immediate success.

Green Bay has long been in search of a compliment on the other side to Davante Adams. Higgins is a complete wide receiver with championship experience at Clemson. He could solve a ton of offensive issues for the Packers who need to concentrate on helping Aaron Rodgers as much as possible while his window is still open.

The 49ers could use some help at both the safety and cornerback positions so Winfield would seem like an obvious choice here because of his ability to play both positions makes him extremely desirable. With Sherman entering the last year of his deal and being on the backend of his career, Winfield could be the future for the 49ers secondary.

The Kansas City Chiefs don’t have too many needs, but that’s usually how it goes when you return most of your starters from a Super Bowl team. The one need they do have is at running back. Sure, Damien Williams was great, but he’s already on the older side and doesn’t have a long track record of success. Taylor put up unreal numbers in his time at Wisconsin and could be a true do-it-all back in a do-it-all offense.