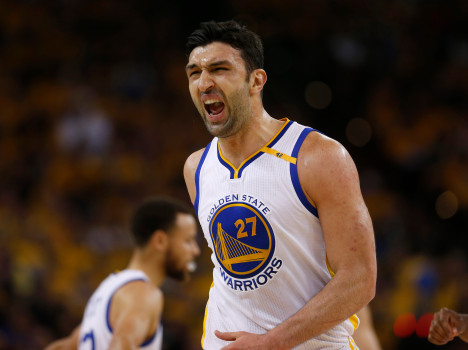 What is going on in the NBA front office lately? How doe Zaza Pachulia not even get a fine for his “fall” on Russel Westbrook this past Saturday night?

Zaza has had a number of incidents during his NBA career where he has shown the type of behavior that should not be tolerated on the basketball court. Some of the incidents Zaza has been apart of include hitting Luke Babbit in the face, snuffing Iman Shumpert, and most notoriously sticking his leg out in the western conference finals on a landing Kawhi Leonard. Kawhi was hurt on that play and this after he tried hurting Kawhi when Zaza was with the Dallas Mavericks. All of these incidents were reviewed by the NBA. This incident on Russel Westbrook was no different. A repeat offender after committing the crime plenty of times before should have been acknowledged by the NBA, yet nothing seems to never get done. I don’t get it, does Zaza have some sort of magic potion on Adam Silver that he stole from Professor Snape?

But seriously-taking action now could send a message during the regular season before more crucial times, like the NBA finals. Something I did not agree with the NBA for doing was when they suspended Draymond Green in Game 6 of the 2016 NBA Finals. Fine the man and let him play later. Keep games like the ones during the season to make an example of the wrong action on the basketball court before players have to take it into their own hands.

Stephen Jackson alluded to this saying “he definitely would’ve gotten taken out” when talking about Zaza being a repeat offender. He also referred to him as a “dirty player”, which is hard to argue at this point. That is when players get seriously hurt and grudges start to form making games nasty, but not the right kinda nasty.  Next time an incident like this happens, I’d advise the NBA to fine the player or suspend them if the play is so egregious. Let them know you have no tolerance for any of this bush league nonsense.

Posting on behalf of “The Wise Ball”

The Extra Point Podcast Ep. 3 From Bleacher Fans Sports is Live
It’s Anthony Davis’ World and We’re Just Living In It
To Top