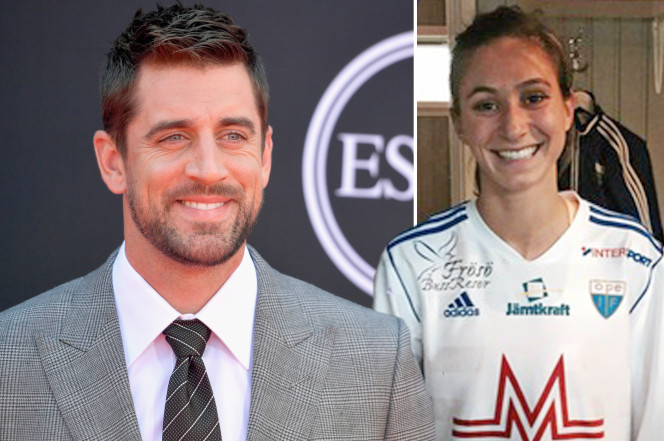 The rest of the NFL better be real grateful the Packers defense is so lackluster this year because A-aron is on a mission and he’s coming for blood. He won that Super Bowl and MVP. Got all the limelight and the hot actress girlfriend that naturally goes along with such accomplishments. After his split from Olivia Munn, Rodgers has been linked to a number of smokeshows. The newest one is former soccer star Marie Margolius. They were seen eating out in NYC earlier this week but dismissed rumors they were together. Rodgers has no plans to continue a relationship during the season. He’s apparently “entirely focused on football.”

Rodgers has seen the light. He knows he didn’t win anything while with Munn and he’s tired of that life. He wants the hardware. Aaron Rodgers is making football his main chick. All other women will have to get in line for the next 6 months because Aaron Rodgers has no interest in you. Expect Aaron Rodgers to have his best season yet. Will it be enough to carry the Packers to a super bowl, probably not, but if anyone can its single Aaron Rodgers. Single Aaron Rodgers is the closest thing the NFL has to Hoodie Melo. It’s like they are both enhanced versions of their already incredible selves. Like they both got injected with the Captain America stuff.

If only they let Melo wear his Hoodie during the season the Knicks might have gotten a couple of championships while he’s been there. Packers fans should feel lucky Rodgers has the choice to put himself in that mode and he’s clearly doing it. Now the Jury’s still out on that whole no sex thing to increase athletic performance. Am I saying Rodgers won’t be having sex? No, he’ll probably have a real solid rotation going throughout the season. But Single Aaron Rodgers is enough. No Family, no girlfriend, no god. Just football. And we’re all gonna be in BIG, BIG TROUBLE.