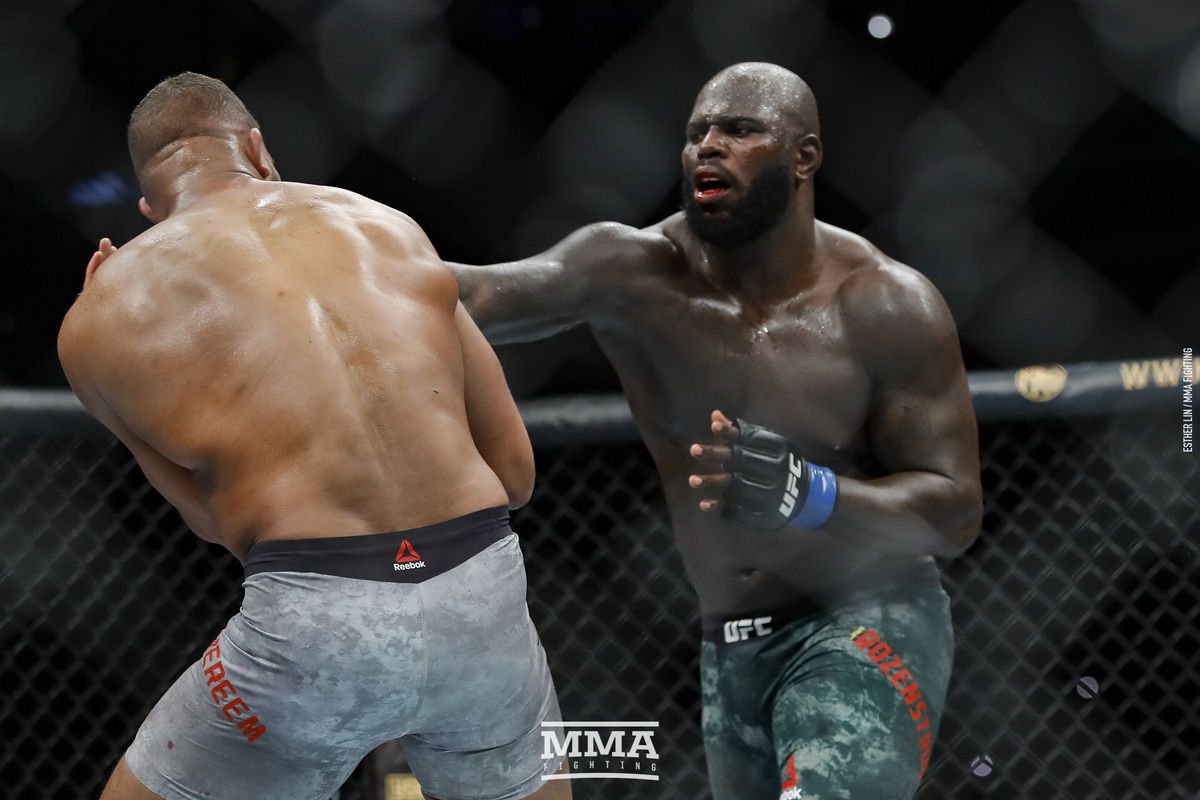 There have been some brutal cuts in fights. Nate Diaz’s eyebrow against Masvidal in November, Robbie Lawler’s lip during the Macdonald fight, Veta Arteaga’s forehead at Bellator 220, we’ve seen some pretty outrageous things, but Alistair Overeem’s lip is up there for one of the worst of all-time.

Imagine being up 4-0 in a 5-rounder and in the last 10 seconds you get cracked with a punch that not only stops you, but also makes your face explode? Overeem was 10 seconds away from a unanimous decision win and then shit hit the fan.

Some life advice: Don't get punched in the mouth by @JairRozenstruik

I mean look at that, his entire upper lip completely split in half.  After the initial shock of seeing this wore off, I thought about how crazy it is that Jairzinho Rozenstruik hit a guy so hard his lip came off.

You can literally see it happen in this video.

Jairzinho Rozenstruik TKO Alistair Overeem with a monster right hand in the 5th round. Busted his lip open with less than 5 seconds left in the fight 👀 #UFCDC pic.twitter.com/ZAtH52Ur6R

Pure carnage. While we’re on the topic let’s revisit some of those notorious cuts I brought up before and let you decide who had it worse.

Nate Diaz eyebrow about to fall off his face tho 😂😂😂 pic.twitter.com/LBPqWcN5d9

Maybe it’s recency bias, but this one based on location and depth alone is just awful. Granted, Diaz’s entire brow line is scar tissue from all the dogfights he’s been in, but still, this one caused a TKO loss (doctor stoppage) for Diaz after the third round in the “BMF” title fight against Jorge Masvidal.

An eerily similar, but not quite as bad version of Overeem, but still he fought the entire last round with his lip looking like this.

This one will always hold a special place for me because of how damn good that fight was. Arguably the best Welterweight championship fight in UFC history. It also led to the inarguably the greatest end to a round ever.

The spitting of the blood and the staredown between these two still gets the juices flowing. Absolute animals.

If there was one of these that could take the top spot ahead of Overeem, it might be this one. After a vicious ground-and-pound elbow from Ilima-Lei Macfarlane, Veta Arteaga’s forehead was split wide open, and you could even see part of her skull. Obviously this ended in a TKO (doctor stoppage) after round 3 where this took place. Towards the end of the video, you can see the doctors tending to it and how bad it really was.

Hawaii’s Ilima-Lei Macfarlane defended her Bellator flyweight title Saturday night, using a vicious elbow to open up a nasty cut on Veta Arteaga’s forehead in the 3rd round. The fight was stopped and the champ awarded a TKO victory in San Jose, Calif. #Bellator #ilimanator https://t.co/VvVdIeRPsV

Here’s a picture for better reference.

Ilima-Lei Macfarlane opens up an enormous cut on Veta Arteaga’s forehead and referee Jason Herzog waves the fight off upon the doctor’s advice. Macfarlane retains the title via TKO. #Bellator220 pic.twitter.com/EheJtWzsfI

Oddly enough, Rory Macdonald, who caused that nasty cut on Robbie Lawler’s lip was also fighting on this card with Arteaga.