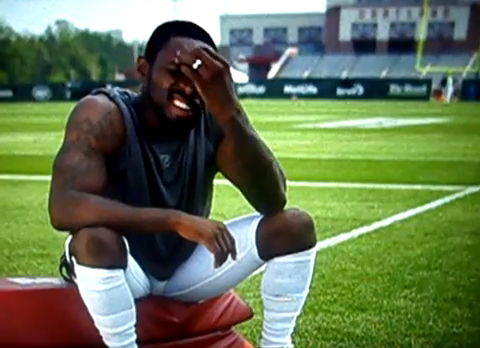 Antonio Cromartie’s sperm just can’t be stopped — the NFL star’s wife is pregnant with his 14TH KID … despite the fact he had a vasectomy a while back. Terricka Cromartie confirmed the pregnancy on her Instagram page — this will be her 6th child.”In the up an coming CROMARTIE DRAFT of 2017, with the 6th OverAll Pick. Will the Cromartie’s Draft a Boy or a Girl. J6 coming soon.” Terricka is 25 weeks pregnant. They haven’t revealed the sex of the child. There is this … Terricka ended her Instagram announcement with the hashtag #bowwowchallenge” — and some people are saying it proves the post was a joke. But we spoke with people close to Terricka who insist this is very real and the baby is due in 15 weeks. Terricka just gave birth to twins back in May 2016 after revealing Antonio had undergone a vasectomy surgery. H/T TMZ

Antonio Cromartie’s sperm is more unstoppable than the TNT Bulls. How this man hasn’t been brought in for some scientific testing is bonkers. We could be dealing with the second coming of Jesus. Was Antonio Cromartie the one who actually impregnated the Virgin Mary? If anyone’s sperm could pull some shit off like that, Antonie Cromartie is my pick.

Apparently, there is around a 1/2000 chance that a guy could still get a girl pregnant following a vasectomy, so those odds alone are incredible. Truly are the 0.001% chance. That wasn’t good enough for Antonio. People still doubted his powers. He went out and had fucking TWINS. Now this one. The chances of hitting 1/2000 shot three times in a row. I have the math literacy of a 5th grader so not sure what the chances are there, but I bet they’re just about the same as someone turning a glass of water into wine.

Eddie Lacy Gets Paid 55k For Being Slightly Less Obese
Mike Brown, Active Head Coach Of The Warriors Almost Gets Arrested By Highway Police Trying To Pull Into Oracle Arena
To Top