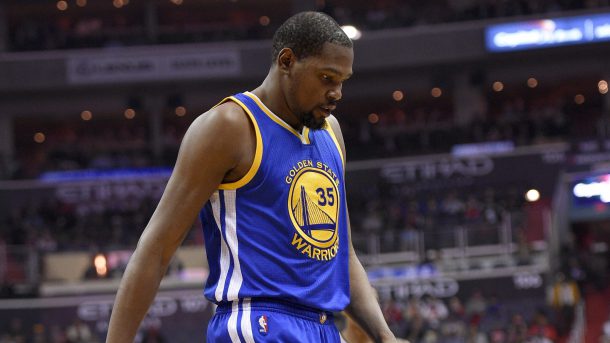 The Golden State Warriors lost more than just a game last night, they lost their All-Pro forward Kevin Durant too. Durant collided with Zaza Pachulia and was immediately removed from the game just two minutes in. God damn it Zaza! Everything was going great and of course, he fucks it up. Sounds about right. After being on pins and needles all night the Warriors found out that it was just a grade 2 MCL sprain and should miss 4 weeks plus. Not terrible, not great.

The Warriors are wasting no time already signing the Califfornia product Matt Barnes to take Durant’s place. Barnes was just waved from the Kings and probably for the better. He started his career with the Warriors and is tough, hard-nosed player who can pass, rebound, and make 3s. You don’t wanna fuck with Matt Barnes, think we all remember the Barnes-Fisher fiasco. Guy, is a psycho and a guy I’d love to have on my team. Old-school. He’ll fit in well into their scheme and give them a chip on their shoulder if they didn’t already need it.

Matt Barnes is no Kevin Durant, though, so how will they fair? The Warriors will be okay, I kind of see this as a double-edged sword. Obviously, this sucks Durant is unarguably a top 3 player, but fortunately for the Warriors, they have a healthy four games on the Spurs. We know Pop also likes to rest his starters in the latter half of the year also. So I don’t think the number one seed is in jeopardy. The Warriors have 22 games left and have only lost 10 this season, I think they’re good.

Stephen Curry has been struggling to shoot and this will force him to shoot out of it, which he will. Curry, as well as Green, will look to be more aggressive on the offensive end. Look for Green to really start to look for his shot more so like last year pre-Kevin Durant. Let’s not forget Green made 7 3’s last year in Game 7 of the Finals, he’s more than capable. Green is a jack of all trades, he can do pretty much anything the team needs of him. His scoring took a back seat this year with the addition of Durant but he didn’t care. He fills in as needed, expect Green to be putting up 15-20 more often than not.

On the downside, this breaks up their missing out on much-needed court time together. There probably won’t me many if any regular season games left for him to come back. The Warriors also aren’t as deep as they once were they no longer have Mo’ Buckets, Leandro Barbosa, Harrison Barnes, and Andrew Bogut. Their starters are going to have to play heavy minutes and grind this out down the stretch, not how Kerr drew it up. I also think this where the genius of Steve Kerr will come in. Nobody knows his players better than Kerr and he’ll play with a few lineups until he finds a winner. I think we’ll see a lot of Curry, Thompson, Iguodala, Barnes, Green. The deathly small lineup with every player more than capable of draining 3’s.

The Warriors will be fine, they’re not one of the greatest teams ever based on just one player. Their ability to move the ball and make 3’s at absurd rates keeps them lethal, to say the least on offense. They will miss Durant’s length on defense but just means other guys like McAdoo and Looney need to step up. However, the Cavs are coming in strong, playing well without Love and Smith and just recently signing Deron Williams and Andre Bogut. Derrick Williams was also quietly a nice pickup up and has found his niche on the team.  Everyone thought the Warriors would breeze through this year a few months ago, but basketball is a long season. Injuries, roster changes, and of course the stars will lead to this Finals being one for the ages. Again.