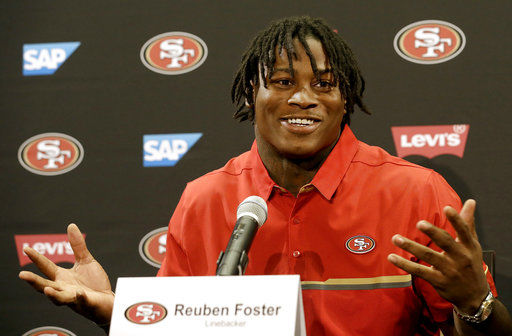 Reuben Foster was on phone with #Saints (32nd pick) when #49ers called to say he was theirs at 31. Here he tells how story goes: pic.twitter.com/RW1SaREUa0

What a story this is. It’s not often in one’s life that you get the chance to hang up on an NFL team, nevermind that move being beneficial. While this clearly was a unique situation and it wasn’t malicious, it’s still hilarious, it still takes balls. Honestly, what are the other options there? It’s not your job to be Adam Schefter for the Saints. You shouldn’t have to bear the burden of that awkward conversation just because the Saints were out of the loop. They were yet to realize they just got owned by rookie GM John Lynch, who had himself a night by the way.

On the other end of that line that that’s not a good look for the Saints, especially when you have Jordan Spieth in the war room looking on. Guessing Spieth wasn’t impressed. What a Honeydick that is for the Saints. sitting there thinking they just got the steal of the first round and then click, its all gone.

This story is a great look behind the curtains of the craziness of the NFL Draft. Things happen and alter the course of the draft in literally seconds. It’s a contest of wheeling and dealing, a huge game of chess that’s nearly impossible to predict. Regardless thanks for the story Reuben. It’s a truly great one.