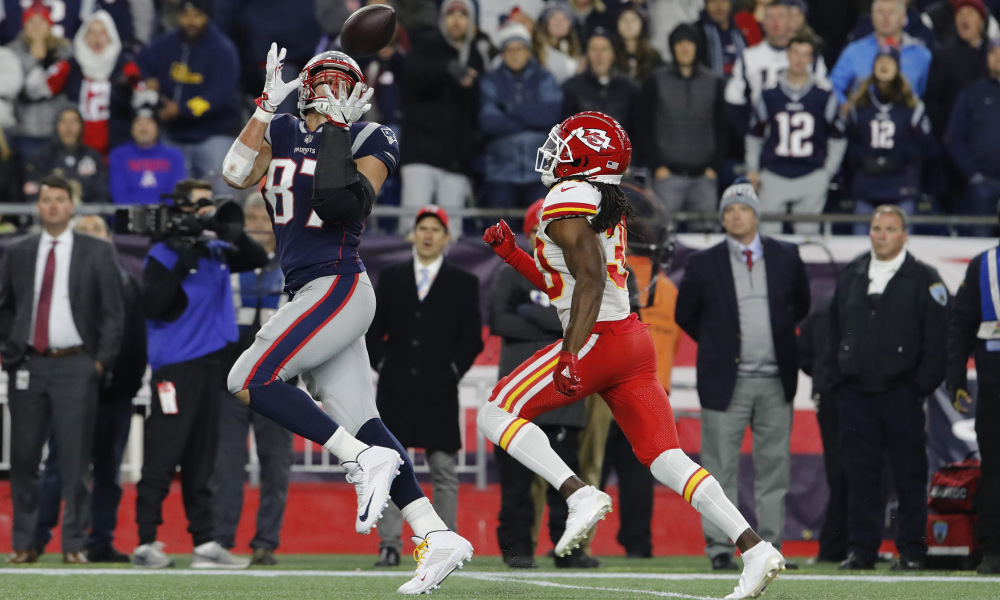 Coming into their matchup against the Patriots in Foxborough Sunday night, the Kansas City Chiefs were undefeated. They now have their first loss after the Patriots squeaked out 43-40 win.

Saying I was nervous going into this game is an understatement. The Chiefs were looking like an absolute wagon coming into this game. Patrick Mahomes has played sensational football thus far.

He has asserted himself as a bonafide gunslinger making big plays in crucial moments. His movement out of the pocket and ability to sling the ball downfield while scrambling from the pass rush is incredible to watch.

With very few mistakes to this point, he has exceeded all expectations and made a name for himself as a top quarterback in the league this year.

Including Sunday night, he has 18 passing touchdowns and only four interceptions, 1,865 passing yards, and 112.2 passer rating. Combine that with two rushing touchdowns on 75 rushing yards and you have a very impressive stat line through the first six weeks of the season.

Unfortunately for Mahomes and company, their toughest test of the season was waiting for them.

Coming into this primetime matchup, Brady and Belichick were 23-0 at home against quarterbacks younger than 25, since 2001.

This Sunday was no different, right from the jump Brady and Patriots showed they meant business. Sony Michel led the running with 106 yards on 24 carries resulting in two touchdowns.

Julian Edelman in just his second game back had 54 yards and a touchdown on four receptions, making his presence known in this surging offense.

Josh Gordon also continues to grow into a major player on this team adding five receptions for 42 yards, and almost had a touchdown of his own before the end of the first half.

Probably the most shocking score of the game came from the 41-year-old reigning MVP, Tom Brady when he turned a broken down play into a four-yard touchdown run in the red zone. He showed us that those 41-year-old legs still have some fire in them.

Kansas City did make the game quite interesting at the end, after a New England score, Mahomes threw a 75-yard touchdown pass to Tyreek Hill to tie the game.

Credit to Mahomes for tying the game in the closing minutes, after throwing two interceptions earlier in the game.

The only issue was they left a little over three minutes on the clock for the Patriots and in typical New England fashion, Brady and the boys marched down the field, a drive that was highlighted by a monster reception and subsequent 42-yard run by Rob Gronkowski to get the Pats into easy field goal range.

The Patriots ran the clock down to three seconds and Stephen Gostowski nailed his fifth field goal of the game to seal the Patriots 43-40 win over the Kansas City Chiefs.