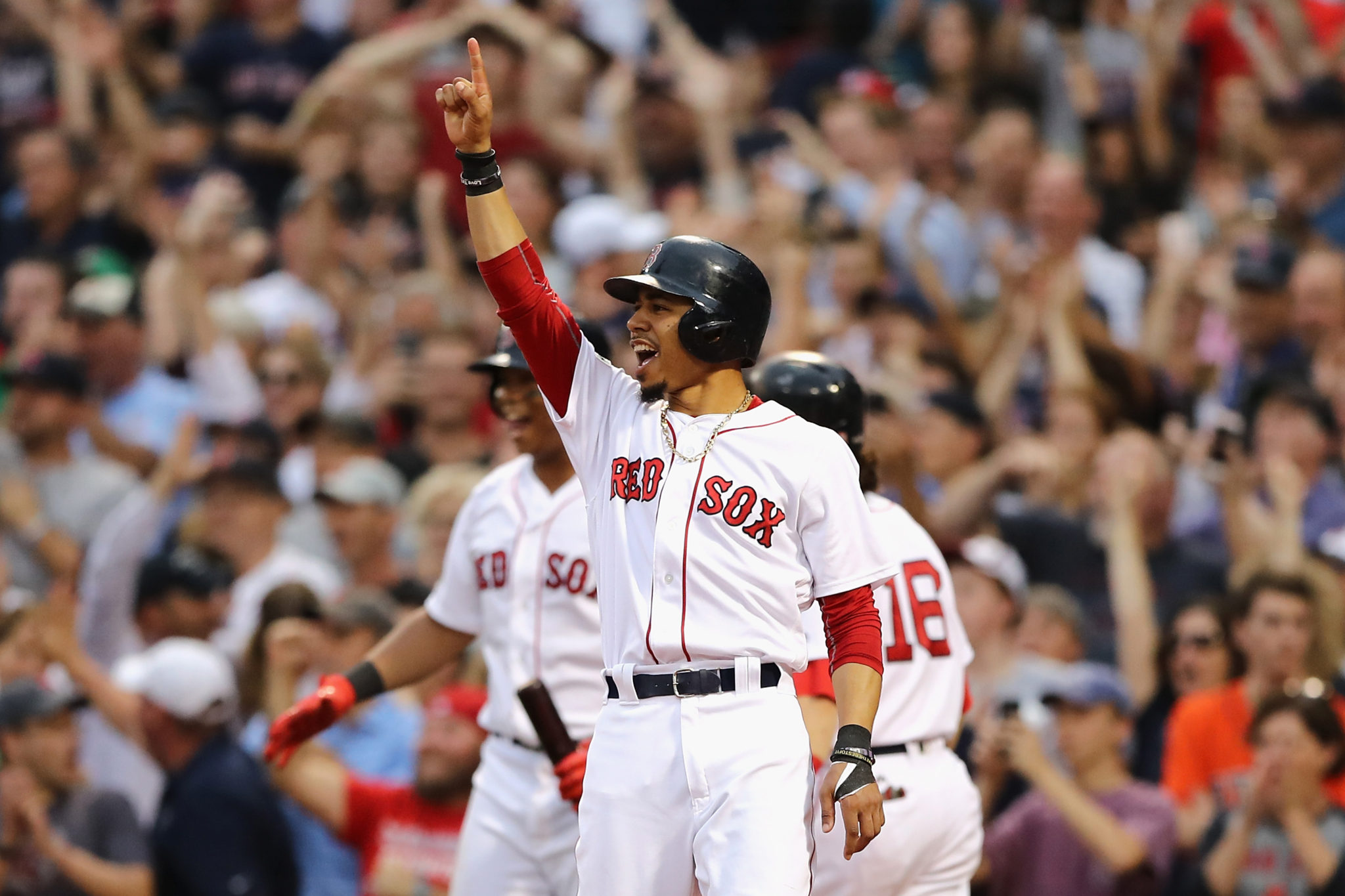 While impossible to break the MLB regular season wins record of 116, set by the 2001 Seattle Mariners, they could still potentially achieve the 4th winningest season in league history if they run the table and win their final 5 games.

Regardless of that, 106 is a whole lot of wins.

During this historic run, there has been no lack of entertainment.

These wins have often been filled with explosive offense, stellar pitching, late-game comebacks, and all around great baseball.

The offense this season has been not only the highest scoring in offense in all of baseball, but it has been must-watch television every time this team is up to bat.

I don’t think anybody expected the offense in Boston to be anywhere near as good as it has been, but I’m so glad it is.

The two biggest reasons for this potent offense’s success has been the reliability and dominance of both J.D. Martinez and Mookie Betts.

This guy has been absolutely insane at the plate. He leads the league in RBI’s with 124 and is second in both batting average and home runs with a .328 average and 41 home runs.

J.D. actually led the league in homers until A’s slugger, Khris Davis’ recent explosion of moon shots, which has propelled him to a 5 homer lead with 46.

Although he likely will finish second in those two categories it’s totally okay because not only has he had a monster season, but the guy leading the league in batting average is his own teammate.

Yup, that’s right, the Sox have two guys batting over .320. Who’s the other guy you might ask?

None other than Marcus Lynn Betts, aka. Mookie. Now it’s no secret Mookie has been one of the top up and coming players since his Boston debut in 2014, two years before he finished 2nd in MVP voting, but this year has been a real coming out party for the Mook Man.

He has established himself as a true 5-tool player, batting a league-leading .343, with 32 home runs, 80 RBI’s, 29 stolen bases, and a 1.073 OPS. Not to mention he is almost a guaranteed gold glove right fielder.

Add all that together and you get a 10.7 WAR, the highest in the MLB by .8. If this guy doesn’t win MVP, I will have no choice to get the United Nations involved because that would be a crime against humanity.

Having these two guys in the top half of your lineup surrounded by players like Xander Bogaerts, Mitch Moreland, Andrew Benintendi, and Jackie Bradley Jr. is a surefire way to guarantee success.

Under the guidance of rookie manager Alex Cora, who has achieved more in his first season then some managers have in years of being in Boston, this team has something special going on.

Being a rookie manager and a former player that is on the younger side, makes it extremely easy for him to relate, communicate, and build a strong connection with his players. It also doesn’t hurt that he won a World Series in 2007 with the Red Sox and as a coach with the 2017 Houston Astros.

Another bright spot this season has been the starting pitching. Led by perennial Cy Young finalist, Chris Sale, who although has had some time on the DL since late July, has still dominated.

Through 153.1 innings he has a 2.00 ERA, .85 WHIP, 229 strikeouts, and has only allowed 34 earned runs. Unfortunately, he will not qualify for Cy Young because of the amount of time he missed (the minimum number of innings pitched to qualify is 162).

Sale is not the only person who has dominated, the $200 million dollar man, David Price has had an unreal second half, during much of which he had the lowest ERA of all pitchers in the American League since the All-Star break.

With Rick Porcello and Eduardo Rodriguez being reliable for the better part of the season, often going deep into games and putting the Sox in a position to win.

Now I’ve said it before and I will say it 106 more times, once the postseason hits, everyone is 0-0. It’s a clean slate and anything can happen and I would be a fool to ignore the glaring fact that the Sox have won the division the past two seasons and have not made it out of the divisional round.

Even more glaring are the struggles the individuals have had, like Mookie Betts not having a single RBI in any postseason game, or Chris Sale having an ERA over 8.00 during the Astros series last year, or David Price who just can’t seem to win in the playoffs. There is a lot of historical evidence that says this team won’t make a deep run.

However, as you know, I love this team. I’ve loved this team since I was a child. I will love this team until the day I die. I’m a huge Boston sports fan, but the Red Sox have a special place in my life, so I have no choice but to believe that they are going to win it all.

Will it be easy? No, we will have to beat two teams who have just as much talent and potential as the Sox.

Something keeping me very optimistic is that they will have home field advantage throughout the playoffs and I’m not sure if you know, but the Sox are pretty good at home. They are 55-21 at home. That’s seven fewer home losses than any other playoff team.

Unlike years past, where they didn’t have the home field advantage, teams are going to have to win in Boston in order to advance. That’s not an easy task on a random Wednesday night in August, let alone in a must-win game in October.

The Fenway faithful will no doubt fill the ballpark and make sure their team has all the support it needs to make a World Series run and make this historical regular season a side note to hopefully this franchise’s 9th World Series title.