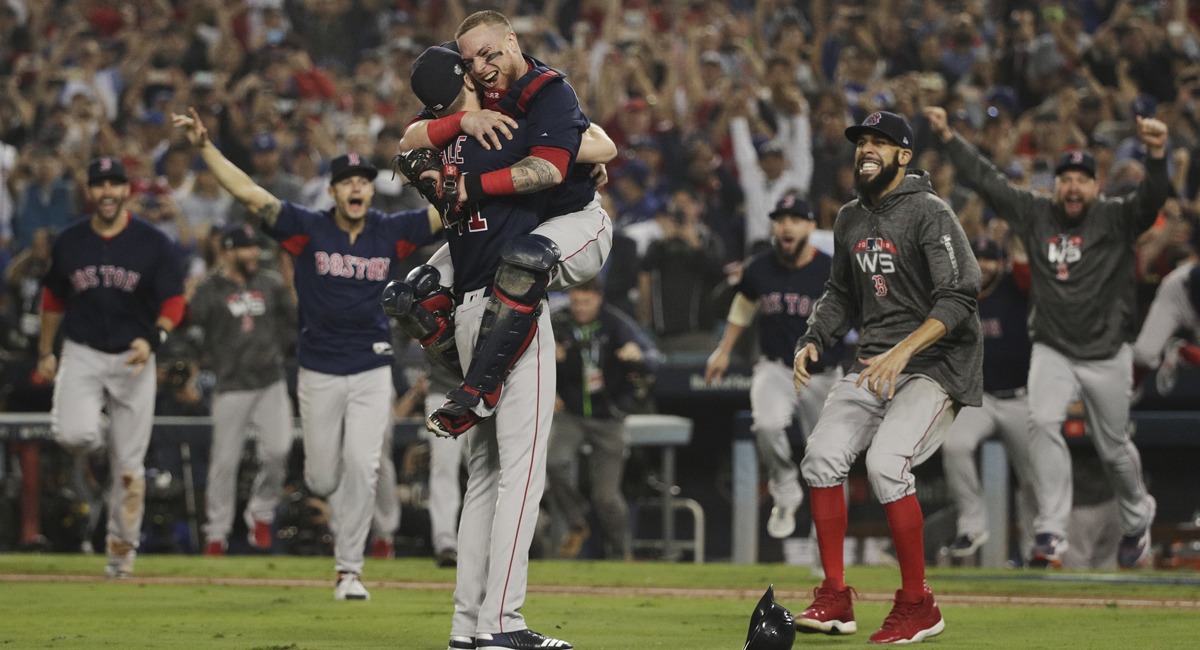 After six months of being the best team in all of baseball, the Boston Red Sox are the 2018 World Series Champions.

After a historic 108 win regular season, the Red Sox beat the Los Angeles Dodgers 5-1 in game five to win the World Series 4-1. Not to brag but my official prediction was Red Sox in five games. Score one for Tommy Buns.

This was an all-around incredible season for this extremely talented young team. Leading the league in almost every offensive category, setting the all-time franchise wins record, and going 11-3 in the playoffs, this team was something special.

Every game was truly must-watch baseball.

From Mookie Betts and J.D. Martinez battling it out for an MVP award, to Chris Sale not allowing a run in six straight starts, to David Price having the best second half of any pitcher in the American League, to Xander Bogaerts cementing himself as a premier shortstop in the league, all the way to Alex Cora coaching his ass off in his first year as a big league manager.

This season was one for the books, capped off by the boys of Fenway winning their fourth championship in the past 14 years, and second in the last six seasons.

While the regular season was about as impressive as it gets, this postseason run may have been even more impressive. Losing only one game to every opponent they faced, the Sox World Series hopes were never really in danger.

In the American League Divisional Series against the rival New York Yankees, the Sox were heading to the Bronx for games three and four with the series tied 1-1. Most people figured the series was going five games and anticipated the stress levels to be through the roof. Then the Red Sox outscored the Yankees 20-4 in the games at Yankee Stadium to close out the series in four games.

Beating the Yankees was definitely a sweet moment, but there was still work to be done. Next up was the defending World Series Champion, Houston Astros, who were coming off of an impressive sweep of the American League Central Champion, Cleveland Indians.

Having won the most games in the entire MLB, the Red Sox were guaranteed home field advantage for every playoff series they played in. Unfortunately, the Astros stole game one in Fenway with Sox Ace, Chris Sale on the mound. Things were not looking good for the Sox as they had lost home field advantage and the defending champions would have three straight home games with a chance to close out the series and send the Sox packing.

Then the Sox other starters, David Price, Nathan Eovaldi, and Rick Porcello decided this series wasn’t going to leave Houston, and neither were the Astros. After losing game one, the Red Sox won four straight to end the Astros season in dominant fashion. The highlight of the series was game five, where David Price, who has notoriously struggled in the playoffs, pitched an absolute gem. Price went six scoreless innings, striking out nine, allowing only three hits, and walking no one. The Red Sox went on to win 4-1, earning David Price his first career postseason victory.

It was on to the World Series. You would think a team with the best record in baseball would have been favored all the way through, but that wasn’t the case. The World Series against the Dodgers was the first time in the playoffs that the Red Sox were not the underdog for the series.

This would be the Red Sox first World Series appearance since they won the title in 2013. As for the Dodgers, this would be their second trip to the World Series in as many years. The Hollywood sluggers were looking for redemption after their heartbreaking seven-game series loss to the Astros the year before.

The Red Sox, on the other hand, were looking to dash those hopes of redemption. After going up 2-0 in the series, the two historic franchises made more history, playing the longest World Series game in history, by both innings and overall time. With the Sox offense struggling for the first time in what felt like weeks, the two teams duked it out for seven hours and twenty minutes, with the Dodgers Max Muncy eventually hitting a walk-off home run in the bottom of the 18th inning.

Though Muncy hit the walk-off home run, he wasn’t the biggest hero of the night, that was Nathan Eovaldi. The Sox trade deadline acquisition threw over 90 pitches in relief form the 12th to the 18th inning, shutting the Dodgers out for five straight shutout innings of sudden death baseball before giving up a homer to Muncy. He did all that he could do to help his team win, and although he gave up the homer, he put his team in a position to win for five straight innings of extras.

To me, the most telling part of his teammates appreciating what he had done, was everyone waiting in the dugout for him after the walkout rather than heading to the clubhouse. Everyone on the team took time to show Nate their appreciation for what he had just done for them and apologize for not doing their part.

After losing an 18 inning game, most teams would have let that get to them and struggled to bounce back going forward. Thankfully, that wasn’t this Red Sox team’s M.O. and they were able to win two straight games to close out the series in five games.

The clinching game included yet another stellar pitching performance from David Price. This time the $30 million man went seven innings allowing only one run and striking out five to lead the Red Sox to their ninth World Series title in franchise history.

While many thought David Price would be the World Series, it would be Steve “Piss Missile” Pearce, who led the game four comeback by timing the game with a solo bomb and hitting a bases-clearing three-RBI double to give the Sox the lead late after being down 4-0 heading into the seventh inning. Combine that with two home runs in game five, and you have yourself a World Series MVP.

The clinching game also saw the Sox star sluggers get in on the fun when J.D. Martinez and Mookie Betts both hit home runs to give the Red Sox a four-run cushion for the final innings of the series.

After Joe Kelly, who was arguably the Red Sox best reliever this postseason, fanned three batters to end the eighth inning, the Red Sox rookie skipper gave the ball to Chris Sale to close out the series.

In typical Sale fashion, he struck out the final three batters to clinch the Red Sox World Series win. The Sox season ended the same way it started, with Chris Sale embarrassing hitters with his devastating slider on the mound. A storybook ending to a historic season.

For many people being a Red Sox fan was nothing but hurt and heartbreak for their entire lives. My grandfather was one of the biggest Boston sports fans there ever was, and he lived his entire life without seeing the Red Sox win a title. Generations legitimately lived and died without seeing their beloved Sox win the big one. The fact that I have been lucky enough in my 22 years to see and remember the Red Sox winning four titles is not something I take for granted.

Boston fans get a lot of hate for being cocky because quite frankly we are. After winning 11 championships in the past 18 years, including at least one in every major American sport, it is kind of hard not to be. But I am here to tell you, this could all end tomorrow. There could be another 16-year championship drought like there was between the Celtics 1986 NBA title and the Patriots first Super Bowl win in February of 2002.

While nothing will ever beat the historic ALCS comeback and eventual World Series title to break the “Curse of the Bambini” in 2004, I can confidently say this Red Sox season was a close second. This team was an absolute pleasure to watch take the field every time they played. Getting to watch J.D. Martinez chase a triple crown, while Mookie Betts was earning a 30-30 season and winning the batting title was as entertaining as it gets.

119 total wins, 960 total runs scored, 1,688 total strikeouts by Red Sox pitchers, 14th American League Pennant, and 9th World Series title, this Red Sox season was one for the books and one that I will cherish forever.

Take a moment to watch the moment the Red Sox completed their journey to becoming World Series Champions.