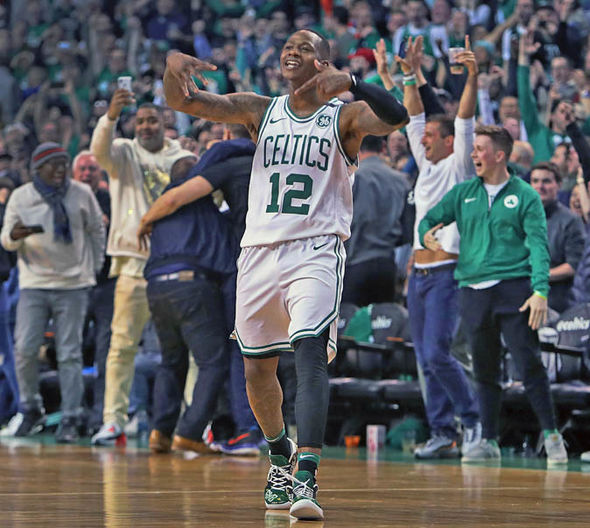 Eric Bledsoe claims he doesn’t even know who Terry Rozier is, I think he is repressing his embarrassment of Terry, in the words of Kendrick Lamar, “Son-ing his punk-ass.”

Over the past two games, Rozier has outscored Bledsoe 46-21. Sheesh, talk about absolutely owning someone on both ends of the floor.

Oh and let’s not forget that if it wasn’t for Middleton burying that near half-court shot with .5 left on the clock at the end of regulation in game 1, then there would have been a lot more talk about Rozier absolutely body bagging Bledsoe before he hit a last-second 3 to go up 99-96. You know what? Let’s watch it 1,2,3,4, maybe even 5 times just for shits and giggles.

Pretty sure if Middleton doesn’t tie the game, then Bledsoe needs to find a new career. You can’t get put on skates like that and not even make a play on the ball in the final seconds. Never mind when someone who has been shooting as well as Terry has is the one with the ball.

After escaping an overtime thriller with a 113-107 win in game 1, the Celtics needed to come ready to play in game 2, and that they did.

I was nervous before the game, but once it hit halftime, it wasn’t even close. The C’s cruised to a comfortable 120-106 win at home. Lead by the 2nd-year stud, Jaylen Brown’s 30 points, 5 rebound night, the C’s did what they do best and played smarter, harder, and better than their opponent.

Add 18 points and 5 rebounds from Marcus Morris, 16 points from Horford, and 23 for the second consecutive game for Terry Rozier, it’s gonna be hard to beat this team when they play like this. Especially when they have 6 guys in double figures with Monroe and Larkin adding 12 and 11 respectively, playing efficient minutes off the bench.

Although the play on the floor was stellar, this win is large in part thanks to coach Brad Stevens. He is far and away a better coach than anything the Bucks could have put out there after giving Jason Kidd the boot.

Although I love seeing my teams win, I will admit that the Celtics did what they should have and won both home games as a 2 seed. It’s ridiculously silly nothing special, but when you take into account they’re down one of their best defenders in Marcus Smart and starting Point Guard and best player in Kyrie Irving, this isn’t an ordinary 2-7 matchup.

This is far more of an even matchup than the seeding suggests. With the current lineups, I’d compare this to a 4-5 matchup between two young and hungry teams.

To think Terry Rozier was a role player to start the season and is now starting and putting this team on his back is wild. You just LOVE to see it. Combine his high-level play with the veteran leadership from “Average Al” Horford and explosive scoring from the young starts Brown and Tatum, you’ve got yourself a team that can contend even without two of its top players.

Never mind the fact that the C’s have had such great success without Gordon Hayward since the first game of the season. Hayward was one of the centerpieces of this team that the brilliant Danny Ainge put together. Losing a guy who was coming off of a 21.9 PPG season within the first five minutes of the season was a devastating blow, even to a team that still had Kyrie Irving.

Since then this team has faced more adversity than most having to play 21 regular season games without Kyrie and now losing him for the remainder of the season, but one thing this team has proved is that they can play through that adversity and still achieve at an extremely high level.

Getting through this series, however, is just the tip of the iceberg for the C’s, they will still have to beat either the Heat or Sixers before getting to the conference finals with most likely Toronto waiting for them.

For now, we will just worry about winning game three and taking things from there, but one thing is for sure, this team although it is banged up, still has a lot of flight left in them.