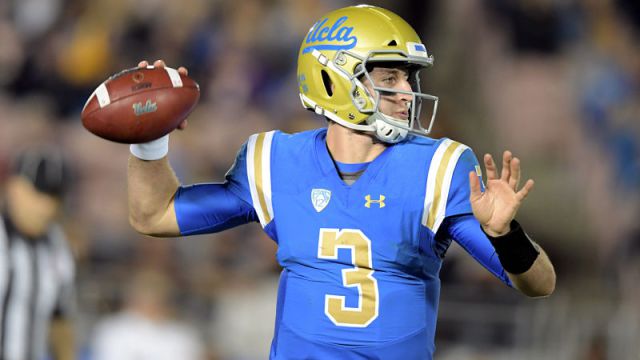 I actually jokingly touched upon this on the podcast this week, so it’s kind of odd this is coming out of nowhere the next day. First, we get this tidbit from Schefty. Then it’s followed up by this one a few minutes later by Allbright.

New England is now armed with double 1’s, double 2’s, and in prime position to move up in draft and select a QB if it so chooses.

Both bombshells at face value, but are we really to believe that’s the Patriots move? Sure Kraft forced Belichick against his will to trade Jimmy G. Sure the Patriots have absolutely no answer to replace Tom Brady. A Tom Brady that everyone outside Boston realizes, doesn’t have too many great years of football left.

The Patriots historically just don’t do this. And by this I mean draft good players in the first round. Virtually none of their first round picks in the Brady-Belichick era have become stars. All of their stars have been later round picks or have been acquired, including Brady himself.

Given Belichick’s style and success rate in past drafts, right now I would say its more likely that the Patriots trade those first round picks for a truckload of middle and late round picks rather than packaging them all together for a top-ranked Quarterback. I mentioned on the podcast that a guy like Mason Rudolph could be a target for them. A guy projected to go outside the first round but still with all the physical tools you look for in an NFL QB. Rudolph will definitely need time to develop in the NFL which is perfect because Brady doesn’t plan on leaving any time soon. A guy with Rudolph’s trajectory could be exactly what the Pats need.

Then again, this is Bill Belichick. As soon as you think you’ve got him figured out. He completely flips the script and makes everyone look stupid. Maybe he’s still annoyed with Kraft about making him trade Jimmy G and he’s going to do whatever it takes to get the shiny top notch QB he covets, no matter how many picks it costs him.

Let’s face it, Bill doesn’t have much time left either. Once Brady is no longer Brady, he’s a ticking time bomb. If he’s in love with Rosen and thinks he’ll be an instant success, then maybe its a sign that he doesn’t have the time left to develop a more raw QB over the next 3-4 years like he did with Jimmy. He wants to leave his legacy with one last great draft pick. And he believes Josh Rosen is it.

Even if that’s the line of thinking and the Patriots do want to move up to draft Rosen, how exactly would they plan to do that? Do they have the ammo? The Browns aren’t going to trade number 1. They just aren’t. They need to end the turmoil in Cleveland and they have to take a QB at 1 to do that. The Giants could be open to trading the pick (which we don’t know for sure) but 23 and 31 overall surely isn’t enough to move up to 2 overall.

I know how much NFL GM’s love their draft picks, but for me? If I got offered that deal? I would say take those two first-round picks, double it and then we can sit down at the table to start the negotiations. Especially with the Patriots who will be at the back end of the first round over the next 2-3 seasons, most likely. That pick is too valuable to the Giants. They don’t need a QB like the Browns and Jets do, but they will soon and they might never pick this high again.

The Jets are pretty much in the same boat as the Browns in regards to needing a QB. They already gave up a ton to get to 3 and even still might miss out on their first choice QB. The first place would be the Browns at 4. Would the Browns accept those two first rounders for the 4th pick, maybe? But who knows if Rosen will still be there at 4? Chances are very high that he won’t be.

So I’m not really sure where and how the Patriots would expect to pull this off, even if they decided to break character and make the attempt. But then again, it’s Bill Belichick