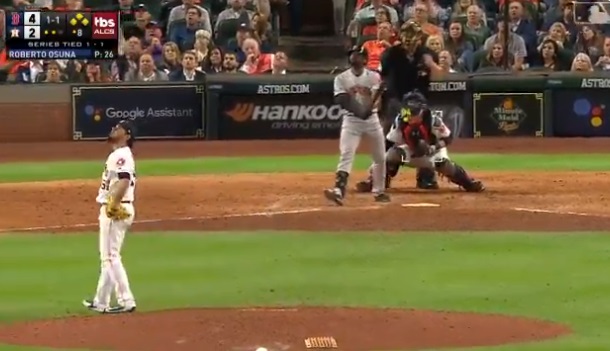 Let’s set the scene, it’s the top of the 8th inning, 2 outs, bases loaded, it’s 4-2 in favor of the Sox, Jackie Bradley Jr. is at the plate. What happens next? A deep shot to right field, going, going, GONE.

A 386-foot rocket right over Reddick’s head. You just have to love it.

The Sox dugout went absolutely bananas, but no one went crazier than David Ortiz.

Big Papa was on the set of Fox Sports during some downtime and the crew was watching the Red Sox game while waiting to go on air.

Jackie goes yard and the rest is just fantastic.

Check out the video of the grand salami, immediately followed by Ortiz’s reaction.

Seeing one of the best hitters in Red Sox history get so excited about a grand slam ding dong made my week.

For those of you who forgot, the big man is pretty much single-handedly responsible for winning two of Boston’s three World Series.

In the 2004 ALCS, he hit back to back walk-off’s to force game 6 in New York after being down 3-0 to the Yankees.  We all know what that led to, 8 straight wins en route to the first World Series win for the Sox in 86 years.

Part of the excitement definitely comes from a nostalgic standpoint. After all, Ortiz hit a grand slam of his own in the ALCS in 2o13 against the Tigers to tie the game in the bottom of the 8th during game 2.

Need a refresher? No worries, I got you.

Great moments in Red Sox history, but then there was the 2013 World Series.

Big Papi truly outdid himself here. He batted a ridiculous .688 with a 1.188 slugging percentage.

An absolute Sox legend and most likely a first ballot hall of famer.

Jackie is someone who struggles with his hitting, going into deep slumps at times, but he came through in the clutch in Game 3, putting the game away with one swing of the bat.

So Ortiz had good reason to be this excited. Seeing him this pumped up made me happy, I can only imagine how it made Jackie feel.