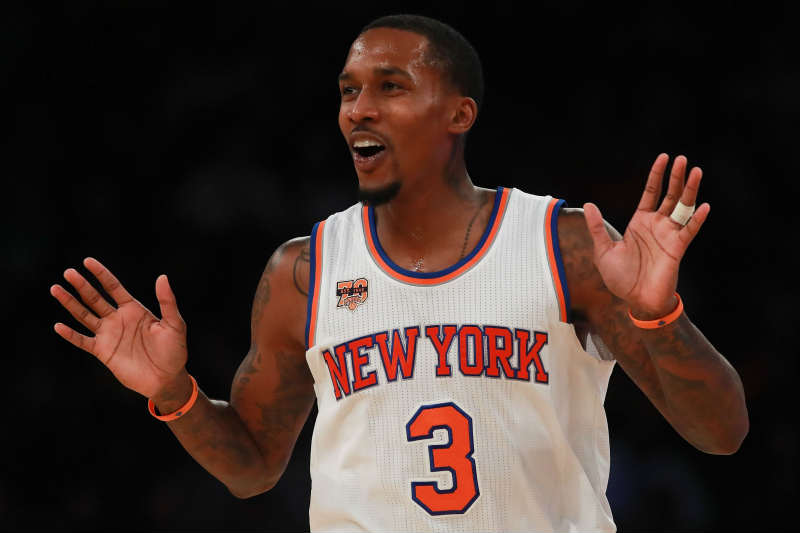 The old-school grit that backup point guard Brandon Jennings is trying to instill in the Knicks’ bench brigade was evident Wednesday night — and not just with his pressure defense and 11 assists.

During one sequence in the fourth quarter, rookie center Willy Hernangomez went to help up Rondae Hollis-Jefferson after he absorbed a hard foul from Mindaugas Kuzminskas.

As Hernangomez extended his hand, Jennings rushed over and pulled Hernangomez away. You don’t help up your opponents. Knicks coach Jeff Hornacek said he loved the move. Jennings said it’s been his way of thinking ever since joining the league and played with Kurt Thomas and Jerry Stackhouse.

“When we’re between the lines and you have a New York Knick jersey on, that’s what we should be worried about,’’ Jennings said after Thursday’s practice. “Would they help us up? I wouldn’t want an opponent to help me up. That’s showing too much respect. If you don’t have Knick jersey on, you don’t mean nothing to me.’’

YOU TELL ‘EM BRANDON! This is so refreshing to see if today’s NBA. every once in a while you’ll see this mean streak come out of players referencing the beloved and long gone hardnosed basketball of the 80-‘s and 90’s. Where “no blood no foul” was generally a legitimate rule held up by the refs. The Lebron driven cry baby league that exists today has done everything in its power to promote and cleaner less violent game, which for the record is probably good in some ways, but it’s lack of toughness devalues the immense talent that lives in our current era of basketball.

The Pat Riley Knicks of the mid 90’s (you know, the last time the Knicks were good) lived by this mantra. They played tough defense and would put you on your back every time you made a run at the rim (see Charles Oakley). This team embodied the true attitude of New York basketball.

Now granted this was done to new European rookie Willy Hernangomez, clearly part of the acclimation process to American basketball. The European game has alway been a little Fro-Yo to the basketball played here in America, so im glad that Brandon is teaching him the right ways.

P.S. Love that Jeff Hornacek gave this move his full vote of confidence. Former player from the 90’s knows what’s good. He also played with Karl Malone, who was not one to put labeled as “soft”.