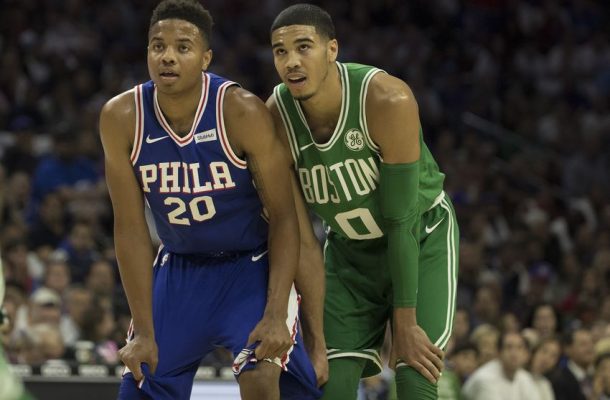 After a back and forth seven game series with the Milwaukee Bucks, in which the home team never lost, the Celtics escaped with a win and are now set for a matchup with the hottest team in the East, the Philadelphia 76ers.

It sucks that the Celtics are playing the Sixers because they are a team I genuinely like. They’re very entertaining and exciting to watch play ball. Not to mention they have some of the best young talent the league has to offer with potential “rookie” of the year, Ben Simmons, the 2017 first overall pick Markelle Fultz, and everyone’s favorite Cameroonian, Joel Embiid.

Dario Saric and J.J. Redick, who is in his 11th NBA season have also been instrumental to their late season and postseason success that led them to a 4-1 series win over the Miami Heat in the opening round of the NBA Playoffs.

Their leading scorer through the first round is J.J. who has averaged 20 points while shooting 45.5% from the floor, followed closely by Embiid who through his first 3 career playoff appearances has averaged 18.7 points, 10.3 rebounds, and 3 blocks per game.

As you might have guessed, the favorite for rookie of the year, and I use the term rookie very loosely, but we won’t get into that right now, Ben Simmons has continued to be a dominant force for the Sixers as well. Through his first 5 career playoff starts he has nearly averaged a triple-double with 18.2 points, 10.3 rebounds, and 9.0 assists per game, while shooting 50% from the field and using his loads of energy to play a whopping 37 minutes a game.

There is no doubt that this team is playing extremely well and has had great, consistency in contributions form the trio of Redick, Embiid, and Simmons. All of the talk of “Trusting the Process” through the past few seasons is finally coming to fruition and the Sixers are no joke.

They made quick work of the Heat winning the series in just 5 games. Their only loss coming while my good friend Sully was watching D-Wade and his Miami Heat run them out of their own building in game 2 of the series. A night where Wade dropped 28 points and grabbed 7 rebounds in just 26 minutes on the floor, in a vintage D-Wade playoff performance.

The Sixers are 21-3 in their last 24 games, and as we all know, me included you can’t stay hot forever. My Celtics went on a 16 straight win tear earlier in the season and struggled down the stretch once the magic wore off. Not saying this is going to happen to the Sixers, but it is definitely possible.

They will certainly have their hands full with Celtics team that is just as young and exciting, albeit injured and Kyrie Irving-less, but extremely well coached team.

Being down their starting Point Guard and centerpiece of their team, a lot of people wrote the Celtics off in the first round and thought the Bucks could take down the #2 team in the East early on, however they did what good teams do in the playoffs, survive and advance.

This is large in part due to the veteran leadership of Al Horford, who stepped up in a big way in round one. “Average Al” led his Celtics team in scoring with 18.1 points and 8.7 rebounds playing an average of 35 minutes a night. This was capped off by an impressive 26 points on 13-17 shooting and 8 rebounds, in the must-win game 7.

Not far behind was SCARY TERRY, Terry Rozier who notched 17.6 points and 6.7 assists per game as starting point guard. Rozier also had an impressive showing in game 7 dropping 26 points of his own while snagging 6 rebounds and adding 9 assists.

Then you have the two Jay’s, Jayson Tatum and Jaylen Brown. This young duo have proven time and time again to be two of the brightest young stars the league has to offer, and they have kept that rolling through round one.

Tatum in his rookie playoff campaign has average 15.4 points, 5.3 rebounds, and 3.1 assists while playing 33 minutes per game. Even more impressive he was in double figures for 5 of the 7 games in the first round and eclipsed the 20 point mark 3 of those games and cam up just one point short in game 1 where he dropped a crucial 19 points.

Brown has been a major factor for the C’s early on in this playoff run using his year of playoff experience to his advantage averaging 17.9 points per game, including two 30+ point games against Milwaukee where he scored 30 and 34 points respectively.

Unfortunately for the Celtics, Brown suffered a hamstring strain in game 7 and is doubtful for game 1 against Philly tonight. This will definitely add another level of difficulty to matching up with this Sixers team. Thankfully the C’s have one of the best coaches in the entire league in Brad Stevens.

Stevens has made a name for himself in the NBA as one of the smartest and most tactical coaches the league has to offer. It played a huge role in the Celtics series win over the Bucks in which the coaching advantage was crucial to the C’s success, going up against Bucks interim-head coach, Joe Prunty, who fun fact shares a birthday with your boy Tommy.

He will definitely have  harder time outsmarting Sixers coach Brett Brown, who spend 11 years working closely with one of the greatest coaches ever, Gregg Popovich, in San Antonio as an assistant coach and director of player development.

Based on the injuries and run that Philly has been on, I’d say the Celtics are definitely the underdog in this matchup, but the thing I love about this team is they have no problem with that and in my opinion thrive from adversity. This is without a doubt going to be the most adversity they have faced all season having to play arguably the best team in the East right now without our best player, but I still have confidence they can make a run at this and reach the conference final.

Whether they win or not, they certainly will not go down without a fight, especially having home court advantage. My prediction is this series will go 7 games and the home team will not lose, exactly like the Celtics first round matchup with the Bucks.

I bleed green and believe in this team to figure out a way to take down their daunting opponent from the city of brotherly love.