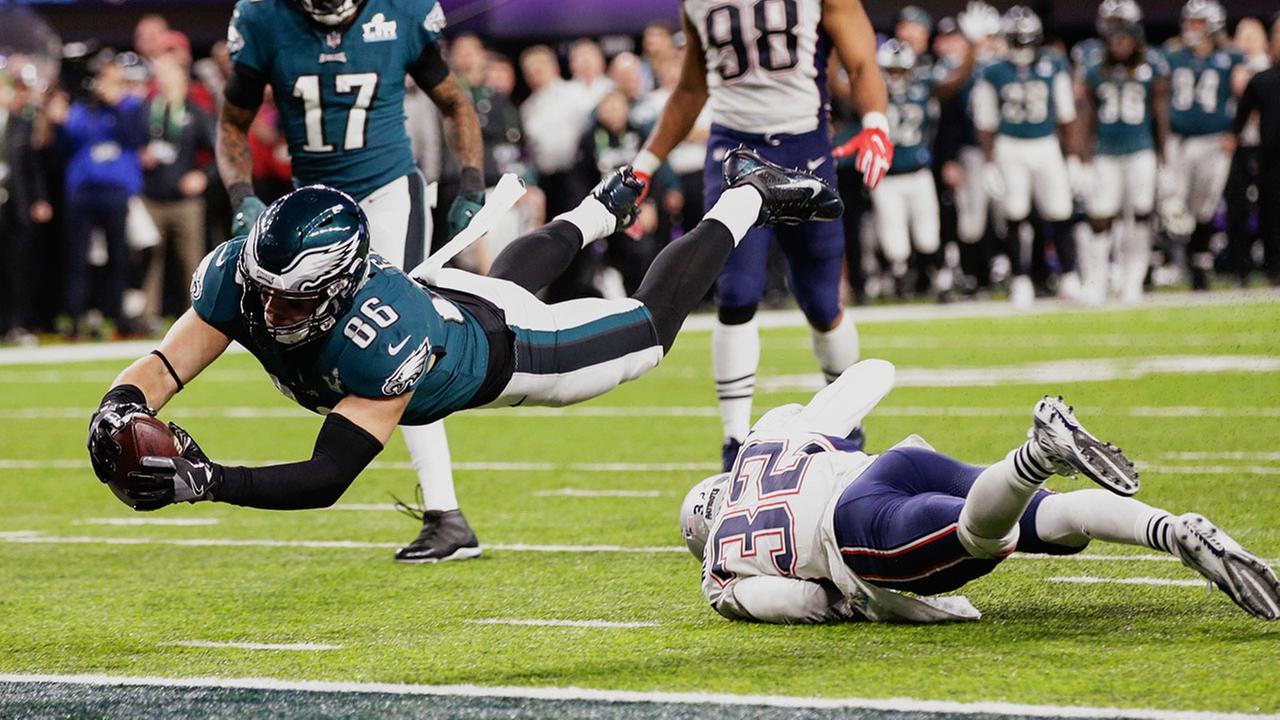 The Philadelphia Eagles are Super Bowl champions, they picked apart The New England Patriots in four quarters of solid football. Four quarters which featured some of the best coaching that I have ever seen. Doug Pederson put on a coaching clinic last night. He made the adjustments necessary to keep his team attacking that entire game. He acknowledged that his defense was leaky so he took the risks to keep his offense on the field and Tom Brady on the bench. He broke open his playbook and pulled out a bag of tricks last night, from a Trey Burton to Foles TD, to an RPO so deadly it gave the Pats an RKO. 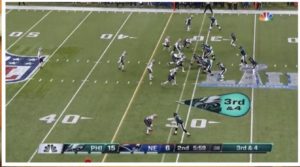 Doug Pederson simply outclassed the defensive minds of the Patriots, a play that stuck out last night came in the second quarter and showed what the Pats were in for. In the second quarter with about 6 minutes until halftime, the Eagles were on third down with 4 yards to go. The Patriots assumed it would be a passing down and were in a big nickel formation with a extra safety on the field, the Eagles ran it on that play through the right tackle for a 26 yard gain. This happened all game last night, the defensive coaches guessed wrong on everything they thought Philadelphia would do, and New England never recovered from it.

The Patriots are not a perfect team by any measure, they have flaws on both sides of the ball, but this team is not supposed to have coaching flaws.  When you have an assembly of minds that features Bill Belichick, Josh McDaniels, and Matt Patricia you assume that they would craft the perfect gameplay to kill Philadelphia; they did not.

Never has a team refused to make the necessary adjustments to matchup as the Patriots did last night. The Patriots were stuck in a big nickel formation all game,  in which they deployed Eric Rowe opposite of Stephon Gilmore. Rowe was promptly burnt by Alshon on the second Eagles offensive drive for a deep TD, while New England’s second-best cornerback wasted away on their bench. This formation killed them as it featured four undersized linemen that barely generated a pass rush, and were never able to consistently contain the run.

The one adjustment New England did seem to make was switching Gilmore to Alshon, it proved to be there right moves as Gilmore kept Alshon quiet for the rest of the game. This, however, is when things got weird, the New England Patriots flat out REFUSED to play Malcolm Butler. Malcolm a  guy who has played 97% of defensive snaps the last three seasons.

Instead, they played Johnson Bademosi a guy who was mainly brought to New England as a special teams player, and someone who couldn’t make a tackle to save his life yesterday. This proved to be fatal as Philadelphia converted 10 of 16 third-down attempts in the game.

New England also refused to have an able body cover Clement last night, the passing back absolutely gashed New England compiling 100 receiving yards, a player who only gained 123 in the whole regular season. 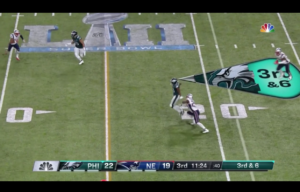 I would like to issue an official apology to Nick Foles. This man was out there slicing and dicing the Patriots defense like Salt Bae on a slab of meat. I mean catching that TD pass from Trey Burton was his salt drizzle , the man was simply unstoppable. 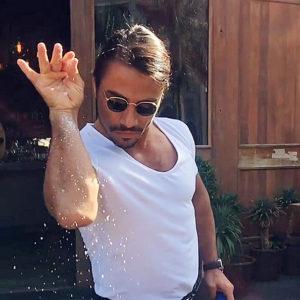 Nick Foles made every throw, the man was simply big time, he was not scared at all. Doug Pederson compiled a list of all of his favorite plays for the Super Bowl gameplan and my god it showed. Nick Foles was stepping up in the pocket and delivering strikes all over the place, he hit the short and the intermediate plays.

The Eagles killed the Patriots at what they try and do best, limit the big plays down the field. Nick Foles simply, in the words of Sully was just not caring. Nick Foles was CHUCKING IT. He was well above average throwing it deep in this game, and if it wasn’t for an Alshon Jeffery slip up he would be above average on all his deep throw attempts. 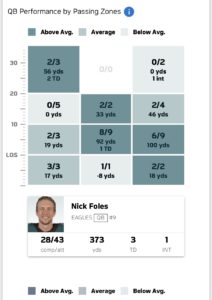 He was out there playing pitch and catch with his receivers.

Look at the patience on this throw, notice the LB in his throwing lane, that was a perfect throw, perfect play call, New England went with an overload blitz even though Ertz was split out wide with a single safety on him.

This was the kick in the groin right here, this was the same play New England tried to call on third down a couple series before this one, that ended with an incompletion. Trey Burton and Nick Foles executed the play perfectly. You can’t argue who the better QB is, but you certainly can’t argue that Nick Foles isn’t the better receiver of the two.

Both Defenses in this game were absolutely abysmal. I wrote about Brady having his way with Schwartz led defenses in the past, and this game was no different. The difference between the two units was that the Eagles were able to make a play when it mattered simple as that. There were 1,151 yards of total offense in this game, this was the highest yardage mark of any Super Bowl by more than 200 yards.

There was only one sack in the entire game, the strip sack that put the nail in the Patriots coffin.There were only 2 eagles possessions that didn’t end in a score of any sort. Nick Foles had a staggering 8.7 yards per attempt, they were getting nearly a first down per every pass. Tom Brady had 10.5 yards per attempt, they were getting a first down per throw on average. There were 4 players in total that had more than 100 receiving yards.

Folks there was no defense in this game, the Eagles were in a 4-3 scheme that generated very little pressure, the Patriots in a nickel that could barely penetrate the line of scrimmage. In a game that featured two of the most lauded defensive coordinators in Jim Schwartz and Matt Patricia, they fell flat in their attempts at effectiveness. The Eagles stayed out of the gun and tight single back sets that exploited the Pats all game, while New England ran a million motions to give away whether Philly was in man or zone. Kudos to the offensive minds of this game, they showed out.

Being a Patriots fan for this specific game was not easy, every loss creates heartbreak yes but this loss was a little different. It is rare to see Tom Brady put on a master class performance and it not be enough to get us a win. It is rare to see Bill Belichick be outcoached by a mile in any given game.

What is toughest about this loss though is that I feel betrayed. This was a different team, there was a different feel, we were too flashy and were too loose. Bill Belichick showed up in a Fedora and a black jacket, he took time during the week to go see a Timberwolves game ( picture that), he gave the team day off to hit the amusement park when veterans would never dream of a day off during super bowl week.

Matt Patricia seemed to have created a gameplay for his Lions of next year against a Chicago Bears defense than the Eagles, this just was not the coaching staff that we know. This was a group of ghosts, making wrong decision after wrong decision.

The most damning one of them all was the Malcolm Butler benching, we need answers we, we deserve that much. The players seem to be hurt by it, but not surprised meaning that something went down this week between the coaches and Malcolm. Former player went Brandon Browner went off on Bill,  to have the leader on our defense Dont’a Hightower liking the post shows a fractured locker room.

Each teams is only allowed a certain amount of Padded practice all yr. I watched Malcolm carry his pads and helmet out to practice everyday. So days we didn’t have to wear pads, lil bruh had to, it was a extra practice after practice everyday. I know first hand what kind of work he put in. He made the team from a workout, he wasn’t a draft pick or free agent signed on draft day. He got it out the mud. He said YES sir, when he answered you. Which I wouldn’t unless I felt u respected me. #strictlybusiness 👑

We are on to next year, but before we need to mend the wound or we will fail. No ship can sail with this many leaks, no matter how great it is.