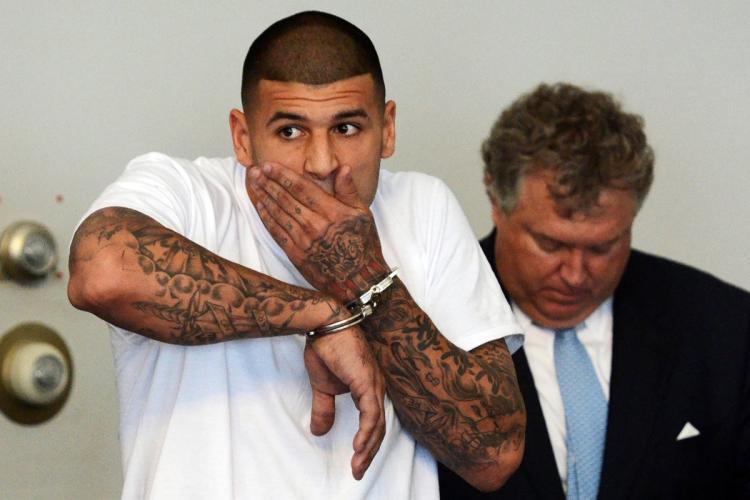 Former football star Aaron Hernandez may have killed Odin Lloyd in order to keep secret the fact that he was bisexual, according to a report which appeared Friday in Newsweek.

Investigators are now examining whether Hernandez, who hanged himself in his jail cell before dawn on Wednesday at Souza Baranowski Correctional Center in Shirley, Massachusetts, was taunted by Lloyd just before he killed him. In April 2015, Hernandez was convicted for shooting and killing Lloyd, a semi-professional football player, on June 17, 2013.

According to Newsweek, Lloyd may have known that Hernandez was carrying on an affair with a male friend who was forced to testify before the grand jury in the Lloyd case. At the time of his death, Lloyd, 27, was dating Shaneah Jenkins, the sister of Aaron Hernandez’s fiancee. Investigators now reportedly want to know if Hernandez killed Lloyd so as to prevent him from revealing details of the Patriot star’s sex life to his girlfriend, who might then pass the information to Hernandez’s fiancee.

Ernest Wallace, a co-defendant in the Lloyd murder case, told police that Lloyd had called Hernandez ‘schmoocher,’ which he interpreted as a gay slur. Wallace is now serving at least four years in prison for helping Hernandez get rid of the murder weapon used to kill Lloyd. He was overheard telling Hernandez’s cousin that he would not have helped the football star hide the gun if he knew beforehand that he was a ‘limp wrist.’ ‘Limp wrist’ is known as a disparaging term used for homosexuals.

The revelations about a possible motive for the Lloyd murder came as news emerged that Hernandez left three handwritten notes in the cell where he hanged himself.

In April 2015, Hernandez (above) was convicted for shooting and killing Lloyd, a semi-professional football player, on June 17, 2013. One note each was written to his fiancée, his daughter, and his gay jailhouse lover. Two of the notes were written to Shayanna Jenkins-Hernandez and the couple’s four-year-old daughter Avielle. Both were seen leaving her mother’s Connecticut home Thursday.

Sources close to the investigation tell DailyMail.com that the third letter was written to Hernandez’s gay prison lover, who has not been identified but was believed to be the last person Hernandez spoke to before he took his own life.Now that man is currently under ‘eyeball to eyeball’ suicide watch. H/T Daily Mail

Ummm, what?! Of all possible twists this whole scenario could have taken, you’re telling me that Aaron Hernandez is fucking gay?! I know there have been a couple rumors swirling around back in the day concerning a longtime high school friend who was thought to be his lover. But geeze, to hear it as an actual thing is still a what the fuck moment.

It totally makes sense though. As the details come out more and more behind this suicide, you realize how plausible this is. He clearly was not murdered and he clearly was not motivated by brain damage as a result of CTE. After his acquittal from the double murder charge, everyone thought that removed the plausible deniability for the Oden Llyod murder to have happened. No one knew of this possible motivation at the time. That’s why everyone was set into a state of shock after first hearing the news. For a 24 hour period, we were left with a bunch of questions marks. This note answered them all.

This move helped his family and daughter guarantee they would hang on to the majority of his remaining assets. But it also was his ultimate cowards way out. For a man who lived every day of his life as a thug and a gang member, being labeled as “gay” is the worst thing that could have happened to him. He couldn’t live with himself and he couldn’t live with that ridicule. Hernandez knew deep down, before anyone, before the facts came out, that he indeed did kill Oden Lloyd. The only difference is, Aaron knew the entire time why, we all thought we did, but as we all found out when this news broke, we didn’t have the slightest clue.