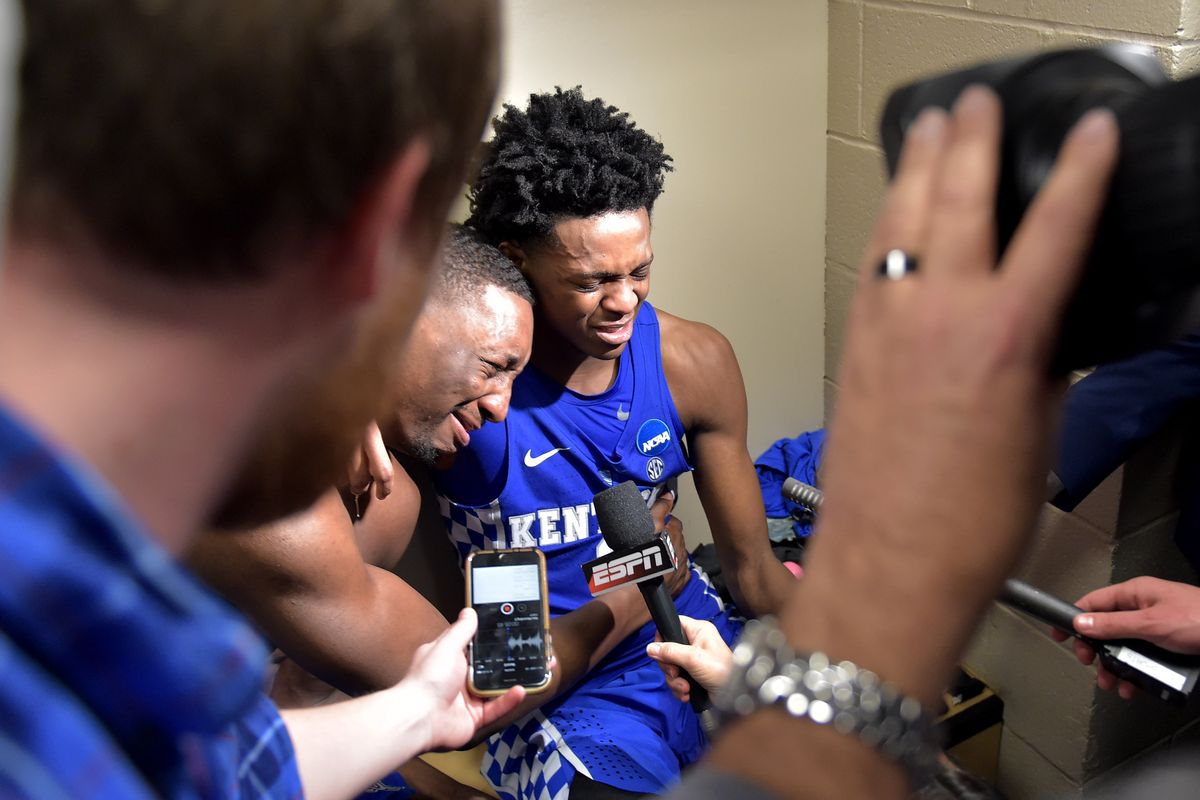 If anyone didn’t think the Kentucky Wildcats’ loss to the North Carolina Tar Heels wasn’t heartbreaking, then you must not have seen De’Aron Fox postgame or know march madness for that matter. After Kentucky point guard Malik Monk made a 3 to tie it at 73, that was fore not. As UNC forward Luke Maye drilled the game winner, with just 0.3 seconds remaining. If you didn’t see Fox’s postgame reaction here it is.

Chills. You can’t help but feel bad for Fox and his teammates after this dagger to the heart. “Everybody talked like we looked like we didn’t care…This doesn’t look like a locker room that doesn’t care.” Yeah, whoever made up that story midseason is bullshit, especially coming from a Coach Cal team. This is hard to watch even for me a non-Kentucky fan but as sad as it is it’s great to see.

For those of you who don’t know De’Aaron Fox well, this very well may have been his last game for the Wildcats. Fox is an electric guard who was on fire in this tournament scoring 39 against UCLA, a freshmen record for the NCAA tournament. He is a sure fire top ten NBA lottery pick if he enters with a chance at being a top five pick. I’m sure he has a million thoughts racing in his head as it is likely this was his last game for the Wildcats. I love to see young players who genuinely care about the game and invest everything’ they have; their body, heart, soul. That’s what Fox did “I love my brothers man.” As he hugs his fellow teammate in tears we know that is nothing but true. Fox could have just said fuck it, I’m a top ten pick, gunna make bank and play in the league. Fuck this. But that’s what is so great about the Madness of March! We are reminded by heartwarming moments like this that these are REAL people. Not only people but KIDS! Student athletes who go to class, represent their university with honor and step on that court knowing it could be the last time ever.

It also reminds us of the harsh reality that March Madness is to all these kids and their dreams. We start out with 68 teams and only one gets to cut down the nets. All vying for the same trophy, but 67 of them will go home thinking what could have been. 67 teams will face this heartbreak and despair we see with Fox, we just don’t always get to see it. There are silver linings for some teams, but these guys are competitors and anyone who is, knows there’s nothing worse than losing. Many of these guys are even 18-19 years old and face immense amounts of pressure and expectations, sometimes even by their own father, see the Ball’s for example. Hope LaVar feels like a piece of shit for that one.

I bet you Fox has played his last game, and he is going to be hurting for a real long time. But Fox is a fighter, he will channel this in his work ethic and come back better than ever in the league. Whoever gets him will be one lucky team I can assure you.I see nothing but greatness and superstar potential for him and his future, we wish you the best of luck young buck.