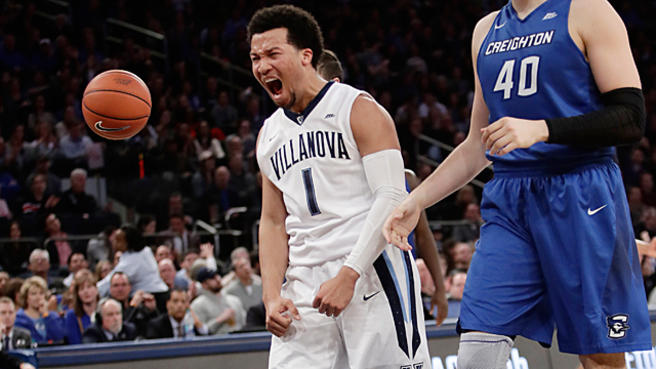 March Madness is upon us ladies and gentleman and I can not fucking wait to be quite simple. This article will be dedicated toward assessing perhaps the weakest bracket of the bunch in the East. Being a Nova fan I am ecstatic with the draw of being the #1 seed in this bracket. However, the Boilermakers from Purdue are also a formidable team. In here I have some key sleepers to give you an edge in this year’s bracket through advanced analytics combined with the good old fashion eye test.

Best Bet To Win the Region

For those of you who may not be March Madness savants, just because a team is the #1 seed doesn’t necessarily mean they should be the favorite to come out of that region. In fact, many times this is quite the contrary. However, not this time, #1 Villanova (30-4) is your best bet to win the East. And no, this isn’t just me being a homer, FiveThirtyEight gives the Wildcats a 50% chance to come out of the East. 50/50 verse the field? Yeah, I’ll take my chances.

Nova is led by two of the countries best in Jaylen Brunson and Mikal Bridges. Brunson is putting up 19.4 points a game with 4.7 assists while shooting 53% from the field and is a player of the year candidate. Brunson is one of the most complete guards in the game with an explosive drive to go with a great post game. Oh yeah, Bridges scores 18 a game himself while shooting the 3 ball at a 43% clip. Nova is one of 6 teams to be in the top 25 in both offensive and defensive efficiency ranking 1st and 23rd respectively. At 30-4 and coming off a Big East Tournament Win, Nova is the best and safest bet to come out of the East.

The top two teams in this region I think are chalk in Nova and Purdue. However, there is a big dropoff when it comes to the third-seeded Red Raiders of Texas Tech (24-9). Many people were high on them around a month ago but since they have fallen off a cliff. The Red Raiders are just 2-5 over their last 7. Not to mention they did most of their damage at home (17-1) and are just a pedestrian 7-8 in neutral site/road games which is what the tournament consists of. There’s a lot to like defensively as they’re 4th in defensive efficiency but they’re just 45th in offensive efficiency and only 36% from 3.

Watching Texas Tech it just seems like they peaked too early. In fact, they have a tough matchup with Stephen F. Austin to start off the tourney which they could lose if it becomes a shootout. I normally like 3 seeds but this is not a legit 3 seed if you ask me. If they somehow make it out of the first weekend they’ll likely lose to Purdue in the Sweet 16. Don’t have them winning more than a game or two.

I could easily say Jaylen Brunson here and he probably is the best offensive player in this bracket. But I’m gonna show some love to the Mountaineers senior stud of a point guard in Jevon Carter. Carter is fucking tough, let me tell you. If you don’t like the way basketball is played today, go do yourself a favor and watch Carter d-up. Carter is an in-your-face guard who is as tough as nails and embodies what Bob Huggins coached teams are about. WVU operates with a full-court press that Carter takes charge in leading the team with an incredible 2.9 steals a game by himself. He also scores 17 points a game adding 6.6 assists and 4.7 rebounds.

West Virginia has a real tough team and will likely go as far as Carter takes them. If they want a chance to beat Nova in a possible sweet 16 matchup he’s gonna have to bring it on both sides of the ball. Carter scares me defensively it’s just a matter if he’s efficient offensively. If the Mountaineers make it past Nova watch-out they could win this region.

I said before that I wasn’t a fan of Texas Tech and they could be maybe a four, but there’s still another team that I think the committee was too high on. That team is believe it or not is the #4 Wichita State Shockers. I really hate to say this too, they never get the respect they deserve by the committee but this year I don’t see it. Unlike most Shocker teams that are great defensively this team just 104th in defensive efficiency which is putrid. Offensively is where they hang their hat surprisingly fourth, but their defensive holes are glaring. The Shockers to me should’ve been a 6 seed as they finished just third in the AAC and failed to win the tournament as well, losing to a good Houston team in th Finals.

Although Wichita has been under-seeded often, they don’t fair very well in March either . The past two years they have won just one game each year getting booted in the round of 32. This year I see more of the same for the Shockers, one and done. The Shockers don’t have an easy opening game against Marshall either who’s 10th ranked high octane offense will look to exploit Wichita’s leaky defense. They should win this game but I anticipate WVU’s full court press will be too much for them.

Honorable Mention goes to #9 seeded Alabama who relies solely on Collin Sexton. They have a tournament high 15 losses and have lost 3 times to a team outside the top 100.

I think the #10 seeded Butler Bulldogs are seeded way too low. To me they should be a 7 or 8 seed and are just as good if not better than teams like Arkansas, VT, and Alabama. Butler actually ranks in the top 50 in offensive and defensive efficiency which is extremely rare for a team seeded this low. They’re balanced and have a very favorable match-up against and Arkansas defense that is dreadful defensively at just 105th. I like them to win this game and play Purdue tough but they will probably lose this game as the Boiler Makers are easily a top ten team lead by four seniors starters.

For the first round there’s a couple sleepers I like, one I mentioned early was #14 Stephen F. Austin over #3 Texas Tech if we’re going big. Austin has tournament experience upsetting #3 seeds beating WVU two years ago as a 14 seed. They are battled tested, well-coached, and led college ball in defensive turnover rate.

I also like the possibility of either #11 UCLA/ St. Bonaventure. This would be against a team in Florida that I just haven’t been impressed with. This is where the eye test comes in, I watch this team and I see a team that is vulnerable to a first round snub. Florida is also just 5-5 over their last 10 games. The Bonnies went 25-7 this year and beat tournament teams like Syracuse and  a very talented URI team. They are lead by dynamic senior guard Jaylen Adams who is just a tick under 20ppg. They are also 53rd in offensive efficiency and 85th in defensive efficiency which is respectable enough where they could win both these games.

If we’re talking sleepers for the tournament I briefly mentioned it before and that team would be WVU. Led by Jevon Carter they’re the only lower seeded team that could take this if they beat Nova in the round of 16. They also have a player named Sagaba Konate who is a force down low averaging over 5 blocks per 40 minutes and is a double double machine. If you’re looking to roll the dice in the East look no further than the Huggins coached Moutaineers.

Who Will Win The Region?

There may not be tremendous value with the pick but Nova is going to win this region so take them. There’s only two other teams have even a slight chance and those are Purdue and WVU but still they’re far from likely. Picking Nova isn’t going to win the East isn’t gonna win your bracket but it won’t lose your bracket either. This is the most talented Nova team I have ever witnessed as a fan that has 7 or 8 really good players. They are young but Jay Wright is one of the best coaches in the game and will have them ready. Take a chance on a couple sleepers but don’t have them go too far, this bracket is a lot of chalk.

Anthony Davis Did What??
Guide to Picking the Midwest Region of the NCAA Bracket
To Top