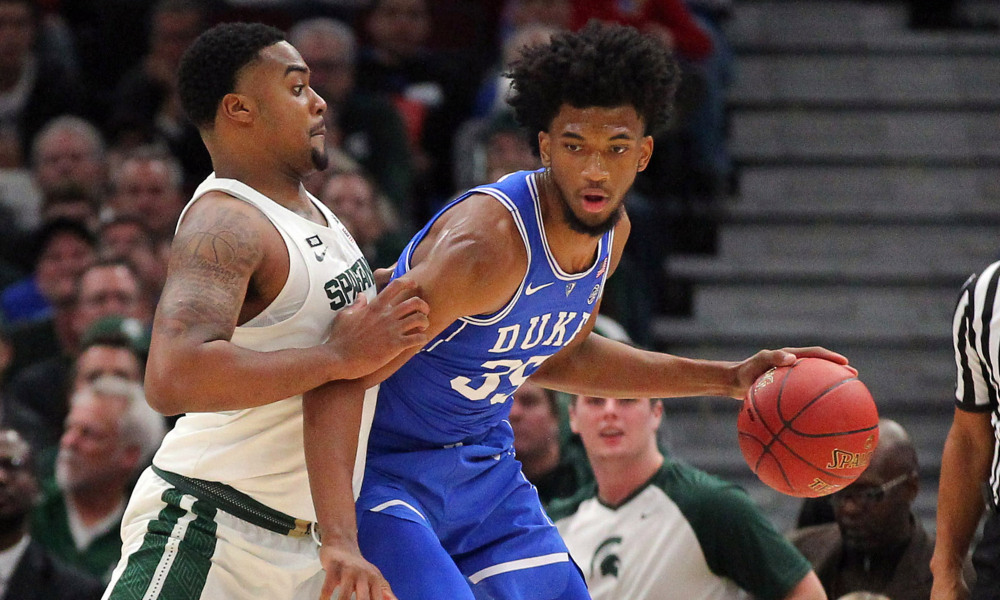 The Midwest Region is a beast this year. Arguably the toughest quadrant of the bracket along with Virginia’s. Then you have the two cupcake brackets. The Midwest is littered with blue blood programs. Something you might find as odd given those are the programs that will draw the highest ratings, you’d think you’d want to separate them a bit. Especially since Duke and Michigan State have to cannibalize each other in the sweet 16. Michigan State being a three seed and then dropping them in this region is tough for everyone involved. By the same token, I would say their 4th and 5th seeds in Auburn and Clemson are a little higher seeded than their talent suggests.

Let’s take a walk through the region, provide a myriad of angles, suggestions, and food for thought as you fill out every bracket you possibly can over the next two days.

Best Bet to Win the Region:

Despite the Kansas Jayhawks being the number one seed in this region, they actually aren’t the favorites to win it. The Duke Blue Devils are. In fact, Kansas isn’t even 2nd, Michigan State is, Kansas is third. This speaks to the talent levels of both Duke and Michigan State. Who both arguably have the most talented teams either of these legendary coaches in Izzo and Coach K, have ever had. While I think Kansas could end up having a fairly easy road to the Elite 8, they still, unfortunately, have to play Duke or Michigan State. Either of whom will be coming off a win against one of the 5 most talented teams in the tournament. I actually have the New Mexico State Aggies taking down a short-handed, overvalued Clemson squad in the first round and riding that momentum and taking down the surprising Auburn Tigers, leaving Kansas to play a 12 seed in the Sweet 16. All that being said, Duke is the best/safest bet to win the region. They are the most talented team in the country without question. They have youth, experience, role players, depth and of course arguably the greatest college coach of all time.

Team To Stay Away From:

My least favorite team in this region is Oklahoma. They shouldn’t even be in the tournament in the first place. Yes, they have Trey Young and yes that is absolutely it. They have gone 2-9 on the road and 3-2 in neutral site games. Oklahoma is 2-8 in its last ten games. When you shut down Trey Young (which teams have been able to do recently) Oklahoma isn’t a top 50 team in the country.

Giving you a double-digit team to stay away from might not be the sexiest advice though, so I’ll also tell you to stay away from both Auburn and Clemson. Both are overseeded and exhibit traits and characteristics of teams scheduled for an early exit. Clemson is missing a starter. They currently rank 49th in the nation in defensive efficiency. Their opponent in the New Mexico Aggies currently ranks 14th in defensive efficiency. The Aggies are a team with a bunch of upperclassmen who have been playing together for a while. Clemson also has a 3 point rating of over 40% which has only generated two Final Four teams in the last 18 YEARS!

Segwaying into Auburn, they also have a 3-point rating over 40%. Auburn likes to get out and run and rank 16th in offensive efficiency, but conversely, they rank 45th in defensive efficiency. Oddly enough their Effective Field Goal % ranks 141st in the nation, only 6 teams worse that since 2001 have made the Final Four. This all could be amplified when they play Charleston in the first round who has the ability to slow down games and get a team like Auburn our of their offensive rhythm. An Auburn team that doesn’t have the defensive efficiency to counteract it.

Best Player in the Region:

There is a ton of talent in this region. Even on Duke alone, you could make an argument for a couple of players. You have Grayson Allen with Duke, Miles Bridges on Michigan State, Devonte Grahm with Kansas, even Tray Young with Oklahoma. While I think Duke’s Grayson Allen has the potential to be the most impactful player to his team if Duke were to make a run, the best player is Duke’s, Marvin Bagley. Bagley is as stud as stud gets. He or Deandre Ayton is the best player in the country. They will be, or at least should be the top two picks in the NBA Draft. Bagley could very well average 25-30 point a game in this tournament, with double-digit rebounds. He’s an animal, has been from the minute he stepped on the court at Cameron indoor and there’s no reason this tournament should change any of that.

Auburn is definitely the least deserving of their seed within this region. 6 of their 7 losses came against top-50 teams. They’re 5-5 over their last ten games. As I mentioned before they have a terrible 3-point rate, which has been a close to a guaranteed sign of an early exit historically. They looked terrible in the SEC conference tournament. They are stumbling into this tournament. Auburn is a team whose wins against lesser opponents and overall record are overshadowing their lack of impressive wins.

Although they’re only a 3-seed, Michigan State is the team here. They should be a 2-seed, maybe even the top overall 2-seed. They are arguably the most talented team in the entire country aside from Duke. All four of their losses came to top 50 teams, three of them on the road or neutral site. They’reeyre top-15 in the nation in both offensive and defensive efficiency. They also have Tom Izzo. Michigan State is a better team than UNC, Purdue, and Cincinnati, the other 2-seeds. All of whom they should be ahead of in a separate region.

My favorite sleeper team in the first round also happens to be my favorite 12-5 upset. The New Mexico State Aggies are poised to take down a hurt Clemson team. Clemson, as mentioned, is 49th in offensive efficiency, while New Mexico ranks 14th in defensive efficiency. Experience and Chemistry are two things that tend to matter in the NCAA tournament. The Aggies have both. The Clemson Tigers have neither.

A sleeper to go to the Final Four isn’t really a sleeper, but with the 4, 5 and 6 seeds being so weak and have them being eliminated early, I have to go with Michigan State again. They could be considered a sleeper because, despite being undervalued, they’re still a 3-seed and would still have to go through two powerhouses in Kansas and Duke to get there. Not to mention possibly a sneaky-tough matchup against Syracuse or ASU in the second round. The deck is stacked against them, despite their talent level, it’s going to be quite the accomplishment if Izzo can get his team through this gauntlet to San Antonio.

Who Wins the Region:

This was a tough pick, a few teams I like in this region. Before the bracket came out, I had two teams in mind I thought were my picks to win it. When the bracket was released, I, unfortunately, found out those two teams would most likely be playing each other in the Sweet 16. Those two teams were Duke and Michigan State. Both immensely talented, legendary coaches and programs. At the end of the day, I kept coming back to the same gut decision, which also turns out to be the most logical and statistically driven one. Yes, stats matter, even in March. The Data proves that, year after year.

Duke is the team to pick the region, in fact, I have them winning the entire tournament. They truly don’t have any weaknesses. No one has the talent to overcome them or the coaching to out-strategize Coach K. While Bagley is their best player, Grayson Allen will be their most important. He’s the senior leader and he makes them tick. When he plays well, Duke dominates. This will be Grayson’s chance to show he’s matured, to show he can lead a team to a title. He’s won it before. He knows the path, he knows what it takes.

Duke is ranked 3rd in offensive efficiency and 7th in defensive efficiency, which is by far the lowest average combination of any team in the tournament. They rank third overall in the nation in the famous Ken Pom rankings, the next highest in the region is Kansas at 9th. They have a 15.1 point differential, Michigan State is the only team that tops that.

Bottom Line, as I said, Duke has no weaknesses. They have through the roof talent, senior talented leadership, incredible coaching, bench depth with role players who do exactly what they need to do and are playing some of their best basketball all year. It could be a perfect storm for Duke and I anticipate them not only winning this region but cutting down the nets in San Antonio. If they lose a game in this tournament, its because they shot themselves in the foot.