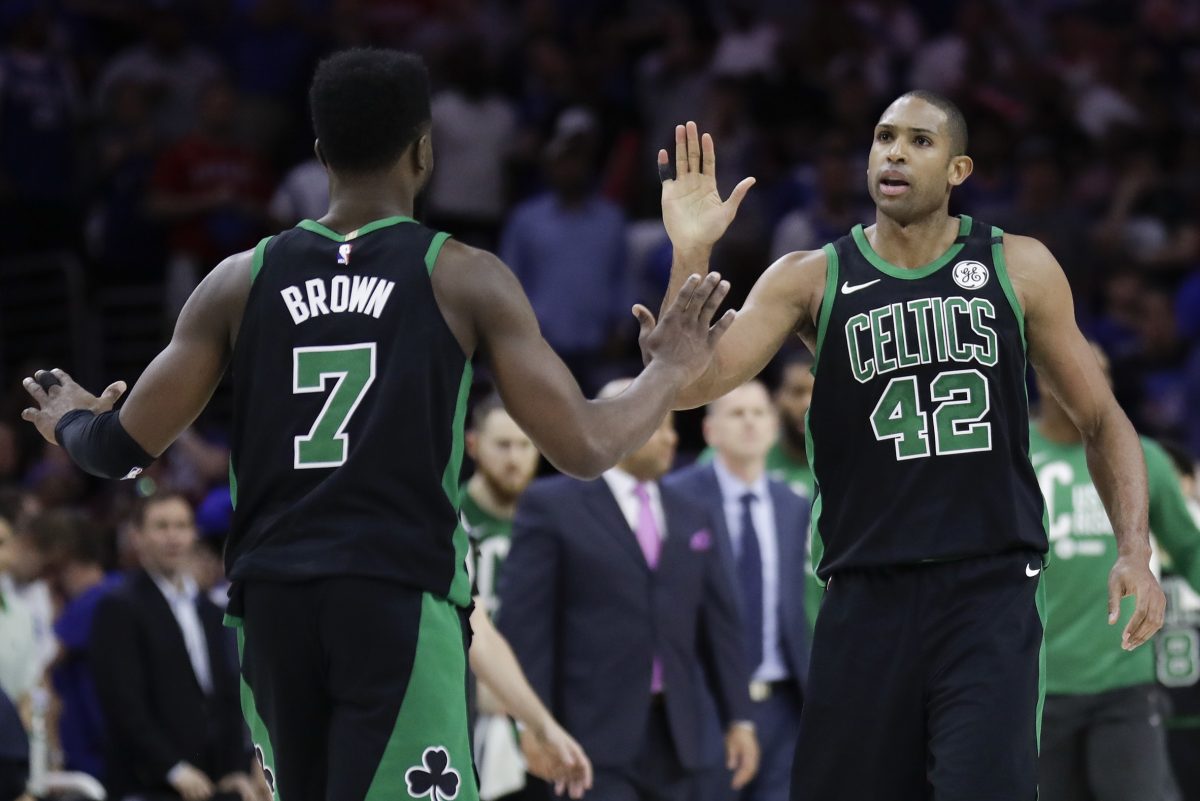 What a time to be alive. After Kyrie Irving went down with a season-ending knee injury, pretty much everyone wrote the Celtics off and said they wouldn’t be able to win in the playoffs without Kyrie. Apparently, no one told the Celtics that because they are now one win away from advancing to their second consecutive Eastern Conference Final, after a 101-98 overtime win over the Sixers Saturday night in Philadelphia.

Riding on the rookie, Jayson Tatum’s game-high 24 point performance on 11-17 shooting, the C’s fought this one out on the road in a game where there were 15 lead changes, both teams left everything they had on the court.

Along with Tatum’s impressive performance, Terry Rozier added 18 points and 7 rebounds of his own. Meanwhile, Jaylen Brown who was on a minutes restriction in order to combat his hamstring issues had 16 points, 9 rebounds, and 2 blocks in just 29 minutes. Brown also shot 50% from 3-point range.

Although his stat line doesn’t show it, Average Al Horford was yet again the hero for the Celtics. Al went out and did his thing adding an impactful 13 points, 6 rebounds, 3 blocks, and 2 crucial steals.

In the final minute of overtime, Horford outscored the entire Sixers team 5-0 and stole the ball with 3.9 seconds left up 99-98 and went on to hit two free throws to seal the 101-98 win.

On the other side of the matchup, the Sixers had 6 guys in double figures, led by Joel Embiid’s 22 points and 19 rebounds. Ben Simmons also had a good showing a bounce-back game after only scoring 1 point in game 2.

Simmons had 16 points, 8 rebounds, and 8 assists, but the real story of Simmons stat line is the 4 turnovers he had, one of which that led to the Al Horford steal and eventually two free throws to take the 3 point lead to end the game.

Turnovers were one of the main reasons the Sixers lost this game, their first real costly turnover came with 4.7 seconds left, the Sixers had the ball tied 87-87 and a bad pass by veteran, J.J. Redick turned into a Terry Rozier steal and a Jaylen Brown layup leaving just 1.7 left on the clock.

After a falling Belinelli jump shot to tie it 89-89 at the buzzer, the Sixers would suffer from more costly mistakes in overtime.

Side note: The delay to start overtime because the Sixers dropped confetti at the end of regulation is just absurd. I don’t know when teams started dropping confetti after a second-round playoff win when your team is down 2-0, but it needs to stop.

If you win the finals or the conference finals, sure drop some confetti, have a blast, but spare us and yourselves the embarrassment of accidentally dropping confetti when the game gets tied at the buzzer and you think it was a game-winning 3, by not having confetti ready to go after game 3 of the Eastern Conference Semi-Finals.

This is why Philly is a joke. A win for them in game 3 at home when they’re down 2-0 would have been confetti worthy. I mean I guess not every city can have 17 NBA championship banners, 5 Lombardi Trophies, 8 World Series titles, and 6 Stanley Cups, and be used to winning like Boston, but c’mon dropping confetti after game 3??? That’s some child’s play. How can you trust that process?

Now back to our regularly scheduled programming…

Flash forward to a minute to go in overtime Jayson Tatum just hit a layup to make it 98-96 Sixers on top, Joel Embiid turns the ball over to Terry Rozier, who passes to Horford and gets fouled. Al misses the first, sinks the second, 98-97 Sixers.

After a Joel Embiid miss and Ben Simmons offensive board and eventual miss, Morris grabs the rebound and C’s call a timeout. They couldn’t get the ball in and call another timeout. After struggling again to inbound the ball, Morris dropped one over the top to Horford in the lane and he sinks the layup. 99-98 Celtics. 5.5 seconds to go. Sixers timeout.

Sixers attempt to inbound the ball and wait for it…yet another Ben Simmons turnover on a bad pass that gets intercepted by Al Horford, who gets fouled and sinks both free throws to go up 101-98. After a missed three by Belinelli, the clock expired and just like that, the C’s go up 3-0 over the heavily favored 76ers.

Don’t get me wrong, the Sixers are a very talented team. A team I enjoy watching, but they are not ready for this moment. The mistakes they made down the stretch in game 3, a game they should have won and had several opportunities to win, proved that not only are they getting out-coached, by the young core is not ready to play under the pressure of the playoffs.

The only problem I have with this series has been the lines. Someone, please explain to me how a team that is down 2-0 was favored by 9 points? The disrespect to the Celtics is just unreal. The bookmakers just don’t understand that this team is not the underdog, and is clearly the better team. The way this series has gone, the line for game 4 will probably be Philly -12.5 because they are clearly the heavy favorite here.

So bring on Lebron and the suckers form Cleveland and let’s see if the C’s can stay hot and continue to prove the haters wrong. They have made everyone eat their words so far, I hope everyone’s hungry because this team means business.