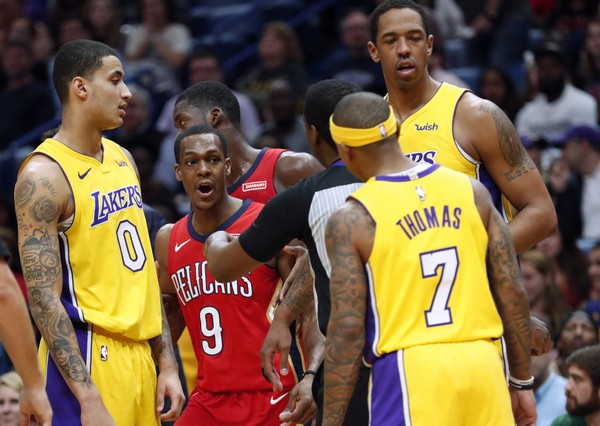 Rajon Rondo was irked to hear that the Celtics would honor Isaiah Thomas on any night. "What has he done?” Rondo asked. Told that he led the Celtics to the conference finals last year, Rondo remarked, “Oh, that’s what we celebrate around here?”

More Rondo on IT: “This is the Boston Celtics. This isn’t the Phoenix Suns, no disrespect to any other organization, but you don’t hang conference titles. Do we hang going to the conference finals? What do we hang here?”
Title banners, Rondo was told.
“OK, cool,” Rondo said.

Isaiah Thomas said Rondo brought up the video tribute kerfuffle today when they went at it. He said Rondo hit him in the face 3 times without consequence before he reacted. Says he doesn’t know Rondo and doesn’t know why Rondo reacted to him the way he did.

Alright, I think its come to the point where we really need to start being concerned about Isaiah Thomas’ mental state and stability. The guy is literally delusional. I don’t know if he has schizophrenia or what, but the guy is off his rocker. He’s been showing signs for some time now. It all started last season when Isaiah Thomas suggested he was expecting a max contract. If that’s not laugh out loud funny to you then you either don’t know anything about basketball or you have a terrible sense of humor.

Then he thinks he deserves a video tribute from the Celtics for his WHOLE 1.5 YEARS of decent basketball he played for them. In actuality, it was zero seconds of decent basketball because he’s been the worst defensive player in the NBA for almost three years now (not my opinion, statistical fact), but that’s neither here nor there. He could have had 5 great years and him having the clout to control his own video tribute would have been questionable.

Now he’s getting in fights with the guy who might care the least of anyone in the NBA? Is this guy serious? Isaiah Thomas fucking 5 feet tall. He’s not tough, he hasn’t proven in any way he’s tough. He’s never won a fight. He can’t even reach high enough to hit half the player’s faces. Rondo would stuff him in a trash can with one hand while eating a melting ice cream cone in the other. He wouldn’t let a drop hit his hand either. I’m not sure how we’re supposed to take Isaiah Thomas seriously at this point and with the level of delusion he’s showing, we should probably get a shrink on hand at some point too. I’m sure there’s plenty of them in LA, a lot of insecure pretty people out there dealing with their overwhelming non-existent anxiety.

Rocky The Nuggets Mascot Tries To Impress Girl Fan, Immediately Gets His Spot Blown Up
Could the Price Ever Be Right for the Red Sox?
To Top