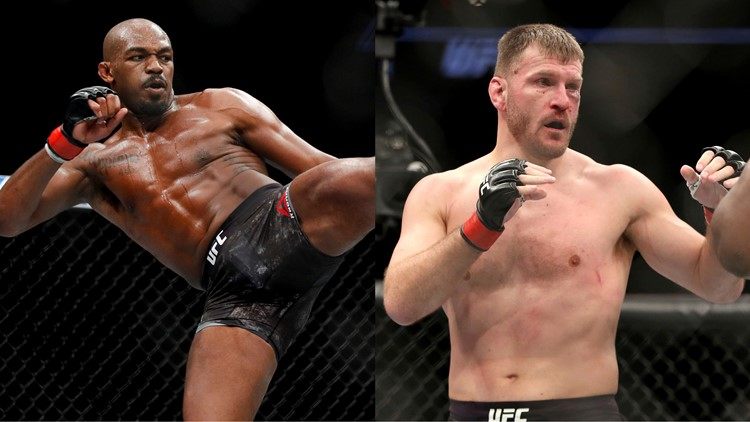 Just one day after Conor McGregor announced his retirement and shocked the MMA world, Jon Jones dropped another bomb on fight fans.

I don’t think you guys are ready to witness @stipemiocic and I, would July give you all enough time?

You’re telling me that Jonny Bones, the greatest light heavyweight ever and Stipe Miocic, one of the best heavyweights ever might fight in July?!

I have two words…YES, PLEASE!

Personal opinions of Jon Jones aside, he is an absolute killer in the octagon and has never actually been defeated. For those of you who don’t know, Jones is 24-1, with 1 no contest. The one loss, however, came from a questionable disqualification for 12 to 6 elbows, in a fight Jones was clearly in a position to win.

Stipe Miocic is another animal, both inside and outside the octagon. Miocic is 18-3 in his professional career He holds the record for most consecutive title defenses at three. He has wins over the best of the best in the heavyweight division including Roy Nelson, Junior Dos Santos, Francis Ngannou, Alistair Overeem, Mark Hunt, and Fabricio Werdum.

Outside the octagon, this savage is a firefighter. Fighting isn’t exciting enough, so this guy fights fires in his spare time. What an absolute animal.

been ready see you there https://t.co/QWV3524xFF

July is traditionally when the UFC’s biggest PPV of the year takes place, during international fight week. I couldn’t think of a better headliner than Jones vs. Miocic.

No official announcement has been made and we’ve seen agreements on social media fall flat before, but it looks like this will most likely be the main event for UFC 239 on July 6 in the Las Vegas. I just can’t see Stipe making the cut to 205 pounds, so this fight will most likely take place at heavyweight.

Current UFC Heavyweight champion, Daniel Cormier, hasn’t fought since November when he defended the belt against Derrick Lewis and there haven’t been any recent talks of him fighting anytime soon. I wouldn’t put it past the UFC to strip Cormier for inactivity and make this a title fight between the former champ and the potential new “champ champ.”

Dana White did say he wanted Conor/Cowboy to be co-main event to a heavyweight title bout in July…now we see the #1 ranked heavyweight contender, Stipe Miocic, and the current Light Heavyweight champion, Jon Jones, gearing up for a super fight in July. Looks to me like we could have a title fight on our hands.

Obviously I’ll update this story as we learn more, but for now, I think this is a real possibility and for all fight fans sake, I hope it comes true.