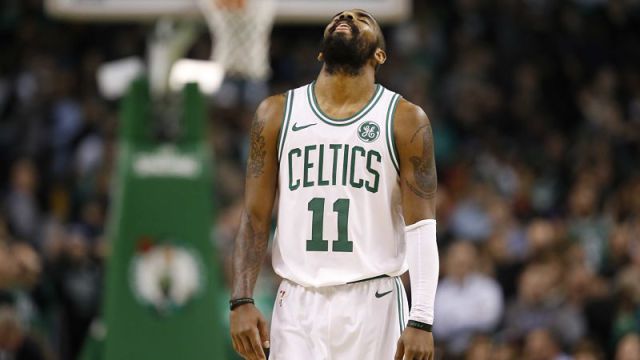 Yup, you read that right. Kyrie Irving is going to undergo minimally invasive surgery this Saturday to help coping with knee soreness. The news broke today on Kyrie Irving’s 26th birthday-Happy Birthday Unlce Drew! Now that’s a pretty shitty birthday present, but perhaps it will be worth it…

Over the past two months Kyrie has missed several games due to knee soreness and this week we learned that he is not progressing as he had hoped. There was some speculation last week that he could possibly need surgery and potentially be out for the remainder of the season.

Today the Celtics announced that he would not be traveling with the team for their four game road trip and would be undergoing surgery over the weekend. The Celtics gave no timetable for his return, although they said an update would be given after the procedure.

My guess is that the doctors can’t pinpoint what exactly is wrong with the 26-year-old point guard since all of his scans have come back clean. The doctors most likely just want to go in and take a look to see if they can find the reason for the soreness that just won’t seem to go away.

Kyrie is without a doubt the leader of this impressive Celtics team. On the season he is averaging 32.2 minutes per game, 24.4 PPG, 3.8 Rebounds, and 5.1 assists and has been invaluable to the C’s during the regular season.

Having him on the floor makes everyone on the team’s job a lot easier. His unmatched handles, improved defense, and unrelenting scoring have put the Celtics in an excellent spot heading into the playoffs.

Even without Kyrie on the floor the C’s have found a way to win. Most recently taking down the Oklahoma City Thunder in a 100-99 win led by Jayson Tatum’s 23 points, 11 rebounds, and 4 assists. Marcus Morris added 21 of his own points, including the game-winning three-pointer with just over 1 second left to play.

Marcus Morris not only helped out in a big way in this game, but led the Celtics in a disappointing 125-124 double-overtime loss to the Washington Wizards in the first game of this most recent stretch without Irving. Morris dropped 31 points and grabbed 9 boards. You never want to lose but a 1-point double OT loss in a game without Marcus Smart, Jaylen Brown, Al Horford, Daniel Theis, and Kyrie Irving, is something I can live with.

There’s no doubt that the Celtics are a better team with Kyrie on the floor, but this team can still win games without him and that is something to keep in mind as we approach the end of the season. I think even without Irving the C’s could get through the first round of the playoffs.

If the season ended today they would be matched up with the Miami Heat in the first round and although it wouldn’t be easy, the Celtics could definitely beat the Heat without Kyrie. This would give him about 3 1/2 weeks to rest and recuperate before returning for the second round.

Obviously not ideal, but wouldn’t be the worst thing in the world.

Hopefully, this surgery goes smoothly and gives Kyrie some answers and *fingers crossed* a quick turnaround to get back on the court with his team and make a deep playoff run.

The Atlanta Hawks are Being Sued for Discriminating Against White People and Yes it’s Real
Should Florida State Fire Leonard Hamilton Solely Because of His Post Game Interview?
To Top