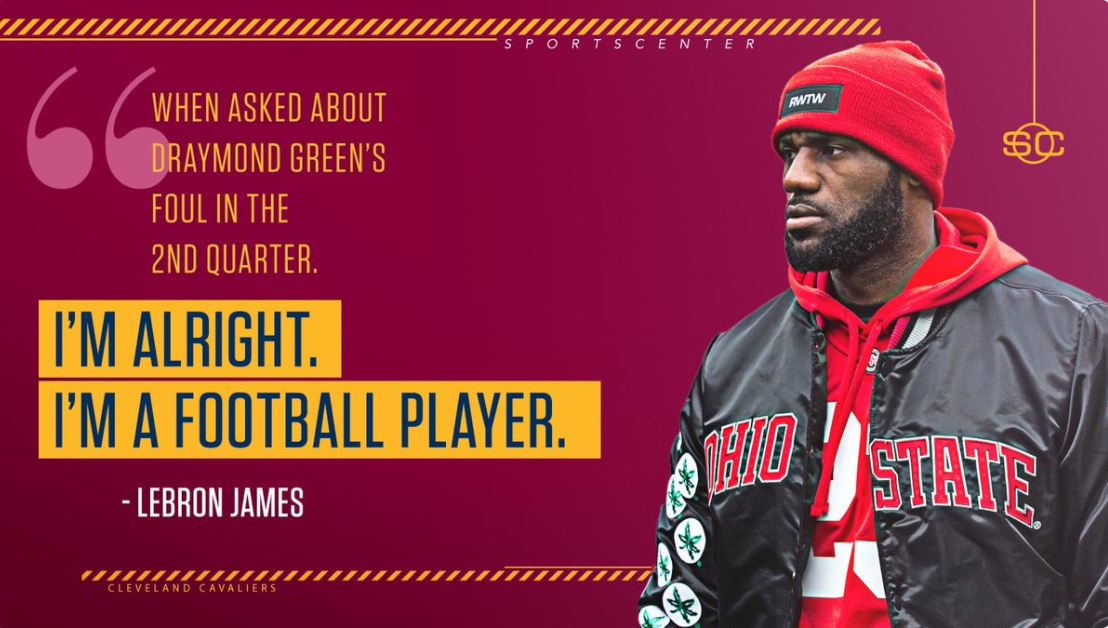 Nothing crazy there, a little rough for sure, could be qualified as reckless, but certainly not malicious. That type of foul happens a dozen times a night throughout the league. Now that you’ve watched the actual event transpire, let’s here what Lebron had to say postgame in regards to the play above:

AAAAANNNNDDDD THERE HE IS! The most Lebron response ever, it’s equal parts perfect and pathetic. Of course Lebron’s ok, he’s “a football player”, haven’t you heard? All year he’s been secretly suiting up on Sundays for the Browns then heading back downtown for a little roundball at night with the wine and gold, duh, no big deal.

The delusion of Lebron never ceases to amaze me. He thinks he’s an NFL football player, as if he could just step off the court and into an NFL locker room like the next Jimmy Grahm or Antonio Gates. Hey, newsflash Lebron, you’re not a football player, nor could you be one on the professional level “whenever you want.” Breaking News newsflash, if you’re such a tough football player, then why did a simple bump to the shoulder knock you flying off your feet knocking you out cold?

Oh, you weren’t knocked out cold? Then why did your body lay virtually motionless on the floor following the collision? Last time I checked, not too many “football players” are left dead and motionless on the floor after a swift grazing of the shoulder. Most NFL’ers don’t even lose their balance, while Lebron looked like one of the Flying Wallenda’s falling off the wire to their death.

does it surprise me in the least? No, not at all, Lebron per usual, is the kettle calling the pot black. It would be so different if he (and the rest of the league) just admitted to what we all see so clearly, people flop at certain times to gain a competitive advantage, just own it. Just don’t come at me with this double standard nonsense, where you just got done acting as if  you had just died, but then post game, you’re a tough as nails football player, so you’ll be “ok.”

P.S. have we at least considered the possibility Lebron was talking about Futbol? In that case he makes a great point I totally agree with. He’s exactly like a Futbol player, one faked life-ending moment at a time….