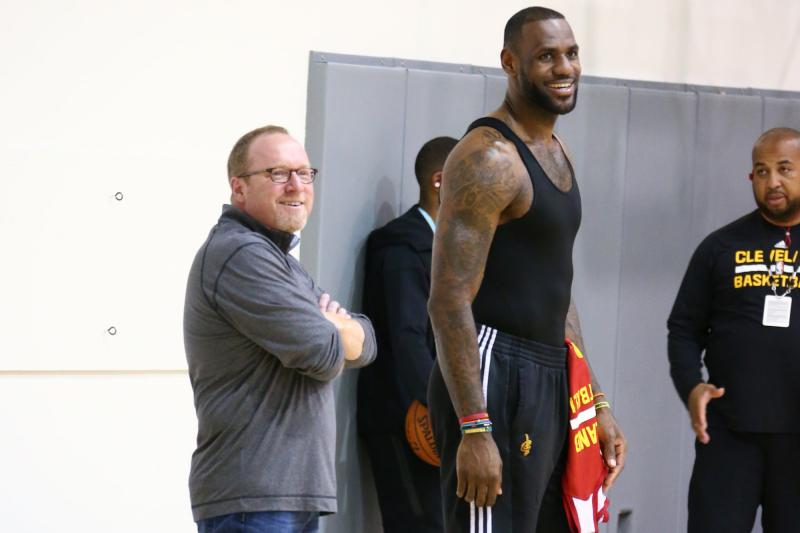 Cavs owner Dan Gilbert, just like that, just issued a statement that he and GM David Griffin have mutually agreed NOT to extend his contract

This is the Statement:

Then the internet went and is currently still in the middle of a frenzy when LeBron tweeted this:

If no one appreciated you Griff I did, and hopefully all the people of Cleveland! Thanks for what u did for the team for 3 yrs! We got us 1🏆

Well, Lebron surely hasn’t wasted any time stirring up the discussion following his return from his annual social media blackout campaign. Zero Dark 6-3-9-23-30 or whatever he calls it now. This move by the Cavs today, by their owner Dan Gilbert, to not renew GM David Griffin’s contract was apparently not knowledge of Lebron James. Whether you believe that I suppose might have something to do with Lebron’s possible meaning behind his tweet. Everything Lebron does and says is calculated. There’s always a meaning and always a motive. It’s one of the things that makes him so unlikable to me. Not even necessarily the actual trait, but just the manner in which he chooses to apply it.

The main question of this tweet lies in the first part, “If no one appreciated you Griff I did, and hopefully the people of Cleveland.” Who is the “no one?” There are two possibilities. First, is the “Lebron is really the GM of the Cavs” crowd. In this case, Lebron is truly showing thanks to Griffin, who he’s publicly applauded on numerous occasions before. This is Lebron trying to prove to that crowd that Griffin was indeed the man in charge, the guy calling all the shots and the mastermind behind this team that’s made three straight runs to the NBA Finals with one Chip. And that now that man is gone, it will be seen how much he’s missed.

The second option is this is Lebron putting Dan Gilbert on notice. Telling him he was not happy David Griffin was let go. He was not happy that Gilbert didn’t check with him first and he was most certainly not happy that now he’s gonna be forced to leave Cleveland again after next year. Cavs fans will look back on this day, they’ll be sitting here this time next year, wondering where it all went wrong. How could it have happened again? When did the downward spiral begin? And how the fuck did Lebron James end up in a Los Angeles Laker uniform?

Watch yourselves Cleveland fans. You might have a James Dolan forming on your hands and I know this is hard for you to realize and understand right now, but no amount of Lebron James can fix that.