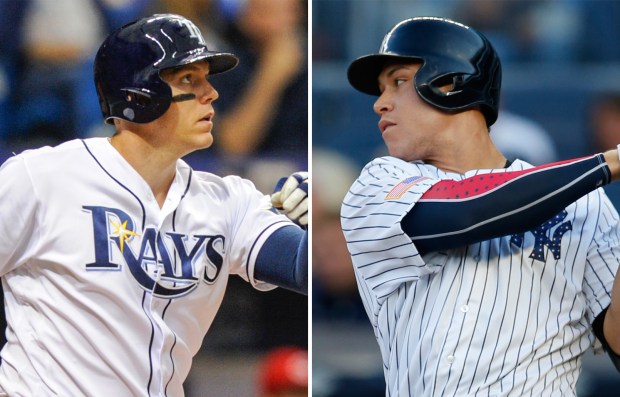 Logan Morrison isn’t thrilled he wasn’t invited to the home run derby and deservedly so I may add. Morrison is having a career year with 24 home runs, already a career high. He seemed to have a gripe with a particular player being selected over. Tha player being Yankees up and coming future star catcher Gary Sanchez. Sanchez has just 13 home runs, 11 less than Morrison provoking Morrison to say…

Wow, talk about not caring. I see where Morrison is coming from being that he’s having the best season and power year of his career. Also, Morrison is tied for third in the Majors in home runs and only Yankee phenom Aaron Judge has more in the derby. Cody Bellinger and Mike Moustakas have the same number as Morrison, 24, and they’re in it. So I get the gripe.

Some people say he’s just being salty or he should shut the fuck up. But nah I actually like this. Why may you ask? The Rays and Yankees are division rivals and I love anything that flares up a rivalry. Look at Boston and Baltimore this year, man those teams fucking hate each other and I could not be happier about it. Everyone in sports is all buddy-buddy and about playing with their friends. While baseball, on the other hand, is as intense as ever in recent time, not to mention the game is being preserved better than any of the others. But that’s a discussion for another day.

And of course, Sanchez fired back, as he should. Sanchez went on to say.

“They gave me an invitation. That’s something I have no control over. It’s not my fault he didn’t get selected.”

Pretty spot on really. Even as someone who openly hates the Yankees I have to concur with Sanchez. Gary is the sexier girl who got invited to the party from the “in crowd” essentially. While on the other hand, Morrison is the overachieving 6 or 7 that’s nice but nothing to write home about from a less popular crowd. Sure every party needs their share of 6’s and 7’s but people are at the party for the smoke shows, the one’s that make your mouth drop.

Now although Sanchez isn’t exactly that to the level Giancarlo Stanton is. He also only has 13 home runs as he missed nearly a month of baseball. But Sanchez came on almost Judge-like before Judge was even relevant in the majors. Sanchez delivers young talent and excitement, something people wanna see. Also not working in Morrison’s favor is the fact he plays for the Tampa Bay Rays, not exactly a very popular franchise especially compared to the prestige the New York Yankees pinstripes carry.

So when it comes down to it they’re both kinda right in a way. Morrison has a reason for a gripe, but deep down he knows he doesn’t have the flare of a Gary Sanchez, Aaron Judge or Giancarlo Stanton. Sanchez has that, even if his production hasn’t quite been there to the level due to injuries. Just a game and a half separates the Rays and the Yankees, and I bet they will be neck and noodle all year. I can only hope the Rays and Yankees face off in late September with Logan Morrison at the plate going against Aroldis Champman with Gary behind the plate. Let’s stir the pot.