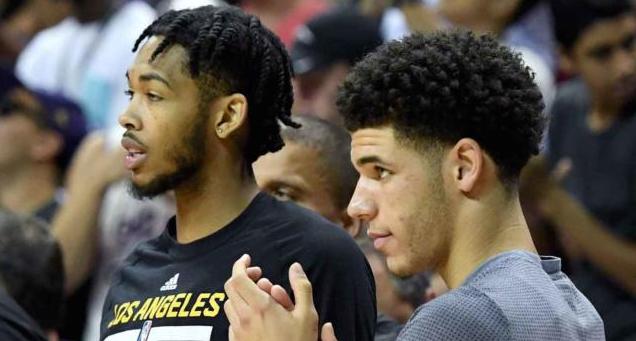 It all started with this picture. 2K this year, in what I assume is a social media marketing effort to generate hype about the most hyped game every year, has been posting pictures of ratings. Hawks rookie John Collins rating was tweeted out with him dunking over Brandon Ingram.

Ingram being a number 2 overall pick and already having one year under his belt, understandably did not appreciate this. So the mild mannered forward clapped back.

His new mild mannered teammate, Lonzo Ball was also triggered by this. So he responded as well.

2k you got 24 hours to change this pic before you lose a customer https://t.co/GVtj0MrzEQ

Pretty soon we had ourselves a “trigger fingers turned to Twitter fingers” situation on our hands. A four-way thumb tango between Lonzo Ball, Ingram, John Collins and 2K. Gotta say Lonzo came off a little snowflaky here. I get he’s a rookie and he’s trying to be a good teammate and defend his dude, but it could not have been done in a less intimidating way. More importantly, that’s the most god damn shallow threat I’ve ever heard. Really Lonzo? You’re not gonna buy 2K? The only basketball game out there?

Yes, I’m very aware NBA Live 18 exists this year. I’m also aware of the big hype around it’s potential improvements. Well, I’ve played Live 2018 and I have some shocking news for you. You might want to sit down for this. But after taking multiple years off and all the hype around this years edition of NBA Live. I can confirm, it is still indeed, TRASH.

The point of the story is, there is not one thing in this world that will prevent Lonzo Ball from playing NBA 2K18. They could take Brandon Ingram out of the game entirely and he’s still gonna be on that shit DAY ONE. What’re Lonzo’s options? Is he gonna become an NBA Live sponsor now? Pretty sure that would hurt his reputation within the basketball community more than this childish display.

2K decided to even it up and gave Ingram his revenge on his rating screenshot. Lonzo is pushing it now. Relax guy. They gave you what you wanted, which was way more than what you deserved. But you just had to keep it going. People say Lonzo isn’t like LaVar. That’s not true. This is a patented LaVar move. We give him an inch and he takes a mile.

Did you see Brandon Ingram play last season Zo? 78 is GENEROUS. At worst, it’s right on the dot. I’m not big on giving guys a bump in points based on potential. That would be the only way to justify anything higher for Ingram. If they’re gonna start handing out ratings on potential, I’ll sit here patiently waiting for 2K to change Kristaps Porzingis rating to a 98. Until then, just drop it Zo. You’re wrong and it ain’t the ant hill to die on before you play a second of NBA basketball.