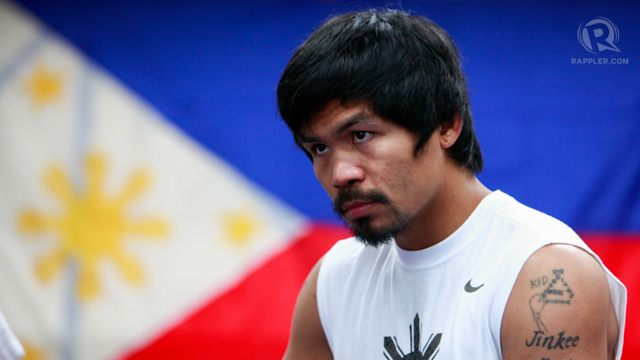 This Saturday night, Manny Pacquiao will fight Jesse Vargas on pay-per-view. The matchup is thoroughly forgettable. But Pacquiao’s management would like to remind you that in his political career, he wants to execute many, many people!

Manny Pacquiao should be retired. He has proven everything there is to prove in boxing, he is not getting any better, and, on a practical level, he has another job: he is a senator in the Philippines. This is an important and high-ranking political position in a nation of 100 million people that is run by Rodrigo Duterte, a madman whose version of a War on Drugs is to kill thousands of drug dealers and users with state violence.

One of Duterte’s close allies in his murder campaign? Manny Pacquiao.

Personally, this doesn’t come as a shock to me, and isn’t really breaking news but is relevant since Pacquiao will fight for the first time in a long time and his PR team for some reason decided to highlight his questionable Political resume. Against albeit an irrelevant opponent in Jesse Vargas.

This bill Pacquiao and this dickhead Donald Trump on steroids of a leader are attempting to get passed will essentially call for the death penalty for anyone using, possessing or importing opiates and heroin of ANY potency or ANY amount. This would OF COURSE include a fucking poppy seed bagel since as most of us know from health class (or Seinfeld) that poppy seeds contain opium.

Moral of the story is I’ve never understood the tolerance around Pacquiao? Clearly, the guy is a scumbag, or just incredibly stupid, my guess is a little bit of both since the Philippines is, you know, a third world country that has a leader who wants to execute for a hearty breakfast, hard to imagine their education system isn’t top tier (SIKE, it’s probably terrible). We get all our panties in a bunch when athletes do or say anything that’s a little out of line. I mean it could be Lebron answering a question with the wrong grammar, BOOM ROASTED for two weeks.

But not Manny, Manny’s been flying by no problem in the eyes of public opinion. He plays that whole “I was poor, made it out of my poor country and now I’m trying to help my poor country” card when in reality the guy is a lunatic. Ask Nike about earlier this year when Manny gave his thoughts on the gay community, Hint, didn’t go so well. He’s kind of been in hiding ever since, and rightfully so.

If an American athlete said or did something 1/10 that bad, they would be crucified forever, wouldn’t play another down, snap, minute, inning, nothing (see Ray Rice). Yet Manny is allowed time and time again, to come into this country, box in front of our fans, in our venues and MILLIONS of people will watch, despite his incredibly ignorant and hateful comments. NFL rating are down and everyone is ready to crucify Colin Kaepernick for kneeling during the anthem, but hey Manny is fighting Saturday, can’t miss that hate mongering unintelligent little man run around the ring for 36 minutes, right America?

Now I’m no politician – although given Manny is a senator, that should mean everyone is qualified right? – but I do know that before you worry about eradicating drugs and drug lords from your impoverished country, maybe you wanna focus on some other areas, like clean water, food, electricity, education, improving roads and other industrial aspects of society, just to name a few. I’ve heard those things can be important, just saying.

P.S.  Try not to get knocked out, full disclosure up until I wrote this article I was still convinced Manny hadn’t woken up from this one yet…