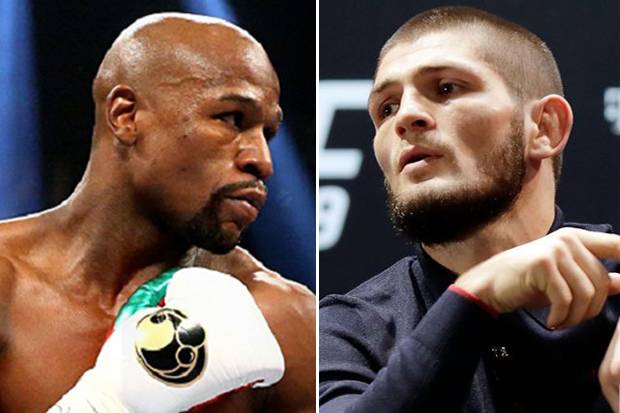 Just weeks after beating Conor McGregor to defend his UFC Lightweight Title, it looks like Khabib is taking a page to of his former opponent’s book.

Earlier this week, CEO of Mayweather Promotions, Leanord Ellerbe, posted a video on Instagram of him and Khabib at a fight in Russia. Khabib took the chance to issue a challenge to Floyd:

He wants a boxing match with the King of Boxing.

Although the english is broken, there’s no mistaking why he would say this. The money.

Forget defending the Lightweight title against Tony Furgeson, this guy wants his shot at $100 million for a boxing match.

With suspensions for both McGregor and Khabib looming from the chaos after UFC 229, Nurmagomedov is looking like he might get a hefty break from the UFC after jumping out of the cage and attacking Conor’s Jiu-Jitsu coach.

So why not go make enough money for your grandkids to live comfortably for their entire lives?

Khabib was laughing while he said this and clearly half joking, but imagine that match.

With all due respect to Khabib, you wouldn’t win this one buddy. You might be the best wrestler the UFC has ever seen, but standing striking is not your thing. Sure, you landed a quick stiff punch to McGregor’s head and wobbled him, but he hadn’t fought in the octagon in two years and most importantly Floyd is not Conor.

When asked about it, Floyd seemed extremely receptive and confident. He actually told CBS, Showtime, and MGM to get their checkbooks ready. Mayweather is a man that knows a good financial opportunity when he sees one.

He also runs out of money every 3 or so years, so the $300 million he made last August from the McGregor fight is probably running low so it’s time to dip the old toes back in the water of the boxing ring.

He also said on video he is going to go with Khabib and also said he wants to get in the ring with Conor again. Both of these would without a doubt be insane money makers, as we saw the first time.

Just the fact that both of these guys have never been beaten is enough to spark the interest if fight fans everywhere. Unfortunately for Khabib, he won’t be able to do the thing he excels at, and fortunately for Floyd, he’s got 50 other wins worth of experience in the ring.

I think this would probably go 5-7 rounds because Floyd wouldn’t want to rob the people of a show, but there’s no way Khabib lands half the punches McGregor did and there’s no way Floyd loses to a guy who isn’t even known for his striking.

You’re a great fighter in the Octagon, but Khabib, do us all a favor and stay in your lane. Go wrestle a mother grizzly or whatever you Russians do in your free time.

Here is all the video of the two talking about the potential bout.