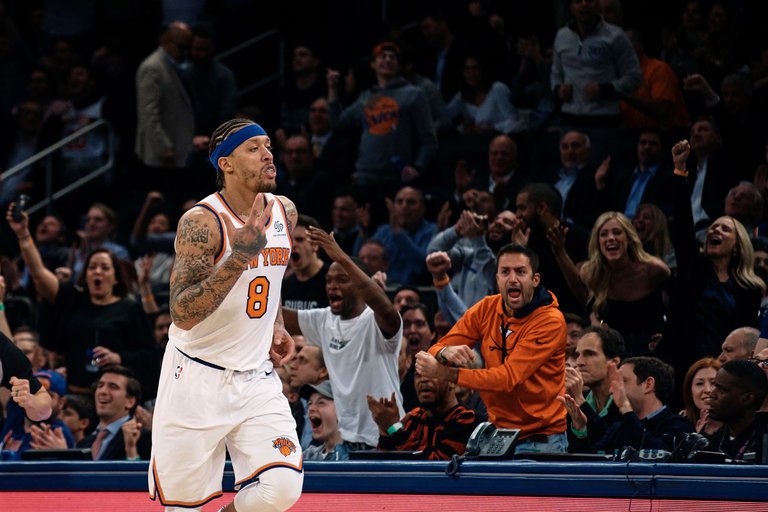 Well, in case you missed it, LeBron James came into the Garden and ruined the Knicks for the 750th time of his career. He does it more regularly than the back on an Ex-Lax box guarantees. During said aforementioned ruining, LeBron usually has some huge dunks, huge dunks that tend to put people on posters. Michael Beasley being the smart level-headed fellow that he is, saw this coming and said “Nope, not today!”

This might be the smartest decision of Beasley’s career. He saw the danger coming and he decided to avoid it. It was as if he was in a reenactment of true events filming a documentary. He had seen this tale, he knows this scene, the spoilers are out all over the internet and Beasley has seen them all. It was a horror movie in the making. A movie he’s seen the ending to first hand, but not something he was prepared to be a part of here.

Beasley has enjoyed a career resurgence in New York this season. He wasn’t about to have his second lease on life get demolished by LeBron’s arm. Instead, he looked up and said: “Yea I’m gonna let the rim take that punch today.” Beasley probably looked at this situation much in the same way that I look at skydiving. Just like me with skydiving, Michael Beasley probably thought “if I decide to try and play defense here, worst case scenario is, I’m dead. The best case scenario is I just get to continue living.”

In the words of the great Vincent Laguardia Gambini, “I’m going with option B.”

P.S. Shoutout to you if you understood that reference, you’re good peoples.