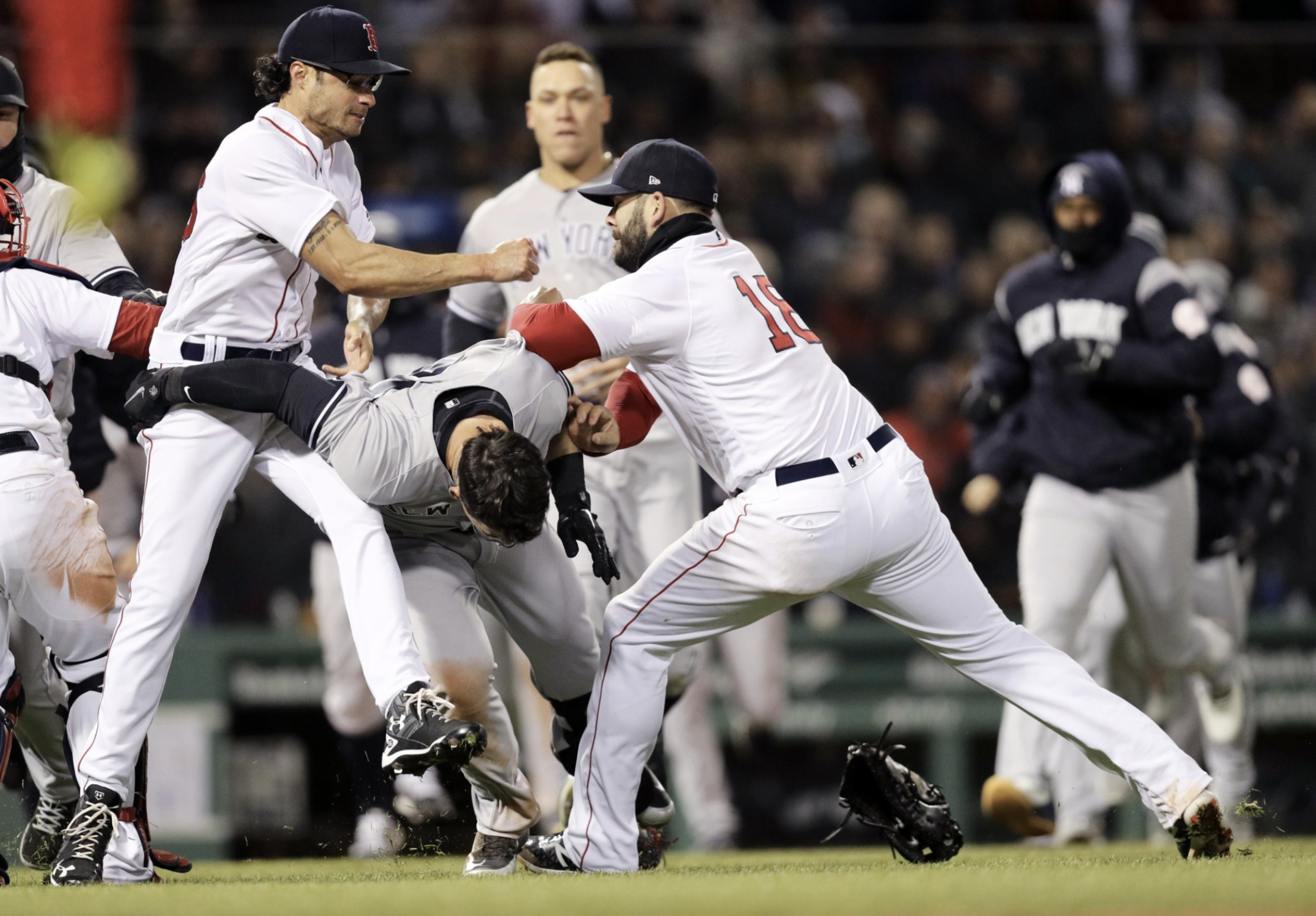 After an exciting home series against their division rival New York Yankees, the Sox are 10-2 and hold a 2.5 game lead over the Toronto Blue Jays. This series had it all; stellar pitching, unreal offense, and even a couple bench clearings.

There’s nothing I love seeing more than an age-old rivalry reborn, which is what saw this week at Fenway. After a 14-1 spanking in the first game of the series, the Bronx Bombers had a strong answer for the home team by scoring 4 first inning runs Tuesday. This resulted in David Price leaving with hand numbness.

I’d like to believe this not to be the case, but his next start being pushed back shows that it probably was legitimate. I still have some doubt that he just got rattled and called it a day after just one inning.I must say though, it did look like he couldn’t grip the ball whatsoever as he was unable to locate the strike zone with any purpose.

Down 8-2 after yet another Mookie Betts double that drove in a run in the bottom of the 5th inning, the Sox got the bases loaded with our new big bat, J.D. Martinez at the plate. Wasting no time Martinez took the first pitch he faced deep to center field for a 436-foot grand slam. This was the second Sox grand slam in two days. All of a sudden it was 8-6 and it looked like the tides were really turning for the Sox.

Unfortunately, the lead was too much to overcome and they eventually lost 10-7, but not without some dramatics on their way there.

In the top of the 3rd, Tyler Austin slid into second base and swiped his leg out while cleating SS Brock Holt in the ankle. The Sox took notice of this and both benches cleared and met at second base. Tempers cooled and both teams returned to their respective dugouts and play resumed, although this matter was far from over.

Flash forward to the top of the 7th inning. Up comes Tyler Austin to face Joe Kelly. Kelly plunks Austin with a 98 mph fastball for his questionable slide in the 3rd inning. As you can imagine, Austin was not happy and he charged….you know what just see for yourselves how things played out.

You love to see this. The first series of the year and these two teams are already starting to hate each other. Austin came out tough but got his shit rocked by Kelly. After Kelly rag-dolled him to the ground he landed two, maybe even three solid shots to Austin’s head. Kelly then found out just how strong Aaron Judge was as Judge pulled him off Austin and got him in an inescapable headlock.

This resulted in Joe Kelly being suspended 6 games and Tyler Austin getting 5 for their part in the Wednesday night brawl.

With the series even at 1 game a piece, the Sox looked to the 2016 Cy Young winner, Rick Porcello, to subdue the Yankees offense.

Well, ask and you shall receive. Porcello went out and pitched 7 scoreless innings giving up only 2 hits and striking out 6. Looks like he has found that Cy Young-winning stride early on starting the season starting 3-0 with a 1.83 ERA, 17 strikeouts, .192 BAA, and just 1 walk over 19.2 innings.

Another gem form Porcello and an impressive showing from the Sox offense, who were without arguably their best hitter in Xander Bogaerts. The boys are sitting pretty comfortably at the top of the AL East, 4.5 games ahead of the Yankees, who cannot seem to find their stride just yet.

Things are looking extremely bright for the Sox this season under new manager Alex Cora. They are currently off to their best start in franchise history and show no signs of slowing down. If they can keep winning at this rate they will surely eclipse the 100 win mark and set themselves up for a deep playoff run.

Although highly unlikely, I would love if the boys could keep winning at this clip and blow everyone in the league out of the water. With the offense finding their rhythm and the starting rotation absolutely killing it,this team looks real strong. However, some moves to strengthen the bullpen could help alleviate some of their mid-relief struggles. I see this as their only one glaring weakness and if sured up could make my hopes a reality.

All predictions aside there is only one thing we can do; sit back, relax, and enjoy the best time of year: baseball season.