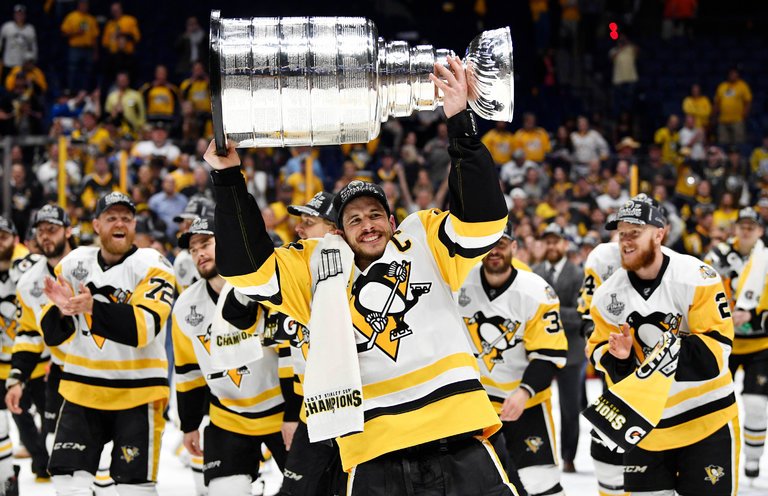 We have some great matchups coming in the first round that will surely not disappoint. This is a historic year for some franchises, but most notably the first ever expansion team to reach the playoffs in their inaugural season, the Las Vegas Golden Knights, who finished the season 3rd in the Western Conference. On that note, let’s start in the West.

On the season, the Predators are 4-0-0 against the Avalanche, who squeaked into the playoffs grabbing the second wild card spot. Nashville is the defending Western Conference champion and the clear favorite to come out of the West again this year. Having won the President’s trophy for the most points in the regular season with 117.

Although team’s who win the President’s trophy historically don’t win the cup, they do have a good history of reaching the Cup final. This teams success this season is large in part due to the phenomenal goaltending by Pekka Rinne, who has garnered 2.31 goals against average, which is the 5th best in the NHL and a .927 save percentage, which is 6th best in the league. Rinne also leads the league in shutouts with 8.

Add a talented team lead by star defenseman P.K. Subban who notched 59 points this season including 16 goals and 43 assists. On the offense, 3rd-year winger Viktor Arvidsson leads the team in scoring with 29 goals, followed closely by fellow winger Filip Forsberg who netted 26 while adding 38 assists to lead the team in points with 68.

Looking to their opponent the Avalanche are lead by all-star Nathan MacKinnon who had a whopping 97 points leading the team in goals with a very impressive 39 and assists with 58 on the season. He finished 5th in total points across the entire league. Combine that with Mikko Rantanen who had himself a career season with 84 points including 55 assists and 29 goals.

Although the Avalanche has their two young studs in MacKinnon and Rantanen, I believe the competition form the defending Western Conference champion Nashville Predators will be too much for the Avalanche to handle.

My prediction: Nashville wins the series 4-1

This Central division matchup looks like it could be one of the more exciting first-round matchups this round. On the season the Jets are 3-1-0 against the wild this year, including a massive 7-2 win back in November. They were 3-0 going into their final matchup with the Wild, and Minnesota managed to win that final matchup in the season series 4-1 to avoid the sweep.

As a whole, the Jets are 2nd in the league in goals per game with 3.3, top 5 in goals against as well as power play percentage, and 9th in penalty kill percentage with 81.8%. They are one of the most consistent and well-balanced teams in the entire NHL and their record this year has proved it.

The combo of Blake Wheeler and Patrik Laine, who were the teams top two point-getters with Wheeler raking in 91 and Laine 70. Laine leading the team in goals with 44 and Wheeler leading in assists with 68. This offense is high powered and hard to stop when it gets going.

On the other side of the matchup, the Minnesota Wild have experience on their side with the veteran leadership of Eric Staal, who in his 13th NHL season has racked up 42 goals and 34 assists, for an impressive 76 points as a 33-year-old. Along with veteran defenseman, Ryan Suter who averaged just under 27 minutes on ice per game and Zach Parise who has notched 5 goals over the teams last five games has found a decent stride just in time for the playoffs.

While Winnipeg is definitely the more talented and energetic team, I think this is going to be a dogfight and take a full 7 games to settle.

My prediction: Winnipeg wins the series 4-3

Probably the most exciting matchup in the Western Conference. On one side you have the Golden Knights, a team that shouldn’t even be here based on the history of expansion teams. No other expansion team in any sport has had the type of success in their inaugural campaign that Las Vegas has had. They were able to put together a season that any franchise would be incredibly happy with, let alone a team in its first season of existence.

Although extremely exciting, they will be put to the test with the Los Angeles Kings who have hoisted Lord Stanley’s Cup twice since their first Cup win in 2012. This team is extremely experienced when it comes to deep Cup runs and is always a team you look at to make a charge in the postseason. In 2012, they won the title as the #8 seed in the Western Conference. Even as they enter this year a sone of the wild card spots, they are still a threat to make a deep run.

This series is going to come down to these two teams key players showing up to perform. On Vegas, you have William Karlsson who leads the Golden Knights with 78 points, including 43 goals all while rocking a Cool +/- of +49, and Jonathon Marchessault who was too shy of leading the team in assists with 48 and earned 75 points throughout the regular season.

For the Kings, Jonathon Quick’s goaltending, which has been shaky at times this year holding a 2.40 GAA, which is higher than his career average 2.28. The play of forwards Anze Kopitar and Dustin Brown who each had 92 and 61 points respectively is going to make a huge impact on this series. These two veterans along with Drew Doughty who has been in LA for both Cup wins are going to need to play a hell of a series to beat the Golden Knights.

This will surely be one hell of a series between two division rivals. This season, the Sharks are 3-0-1 against the Ducks, three of the games being decided by a shootout. Fortunately for Anaheim, there are no shootouts in the playoffs and it’s going to take a real goal to win these games.

You can pretty much throw stats out the window in a series like this because emotion and pure hatred will take over and conquer all.

My prediction: Anaheim wins the series 4-3

Steven Stamkos, Nikita Kucherov, Victor Hedman. Three of the main reasons why the Lightning have bounced back from missing the playoffs to take the top seed in the East. With Kucherov and Stamkos combining for 186 points and defensemen Hedman adding 63 points of his own, this offense is potent.

Although the Lightning have a better record and earned 16 more points than the Devils, the Devils owned the season series with a  record of 3-0-0 and outscored the Lightning 11-8. 19 total goals over 3 games in a goaltenders nightmare and the former 1st overall pick in the NHL Draft and Devils new star, looks to keep that going. Coming off of a 93 point regular season, Hall hopes to keep the good times rolling and take out the top dog in the playoffs early.

This is definitely not going to be a cakewalk for the Lightning and Stamkos and Co. have their work cut out for them.

I wrote up a quick preview of this 2013 quarterfinals rematch early this week you can read here, so I’ll keep this short and sweet.

This series is going to come down to production from the Bruins top two lines and how Tuukka Rask does against this talented Toronto team. Both of these teams are fighters and don’t have an ounce of quit in them. It is going to be highly competitive and highly entertaining.

My Prediction: Bruins win the series 4-2

Is this finally the year the Alex Ovechkin and the Capitals get over the hump and compete for a Cup? Or will they continue to suffer early departures from the playoffs?

With an NHL leading 49 regular season goals, Ovi is as productive as ever when he’s on the ice. He can score on practically anybody in any situation. Anytime he touches the puck, the goalie is immediately nervous.

With three other players over 68 points this season in Backstrom, Kuznetsov, and defenseman Carlson, this team can score and can score in bunches.

Facing off with the Blue Jackets who rely very heavily on Artemi Panarin, who scored 27 goals and had 55 assists is honestly an easy first-round matchup for the Caps.

Going 3-1-0 against Columbus this season a clear sign they can beat this team. Plus, I hate Tortorella so I don’t even want to give him credit that he could beat the Caps in a playoff series.

My Prediction: Capitals win the series 4-1.

You know how I said the Ducks and Sharks didn’t like each other? Well, they’re basically the two best friends on the face of the Earth compared to these two teams.

This rivalry goes back to the early days of hockey. A good old fashioned cross-state rivalry. This has provided some of the best tension the NHL in recent memory.

This season Pittsburgh has dominated the season series scoring 5 goals in each of their meetings while going 4-0-0 including two 5-4 overtime wins.

Pittsburgh has three of the best players in the league with Crosby, Malkin, and Kessel. Those three alone combined for 289 points (105 goals & 174 assists). Holy hell that’s a lot of scoring. Makes sense why they have the best powerplay in the league when these guys combined for 35 PP goals.

Philly has some studs on their side as well, but its tough to compete with those top 3 forwards. Fortunately for the Flyers, they have Claude Giroux who had an insane 102 points with Voracek adding 85 of his own and Couturier notching 76 for a comparable 263 to the Penguins 289.

This is definitely going to be one of the nastiest series of the first round and entire Stanley Cup  Playoffs.

My Prediction: Penguins win the series 4-3

The Stanley Cup Playoffs are unlike anything else, the entire thing is must-watch television night in and night out. Basketball playoffs and Football playoffs are exciting but they pale in comparison to the NHL come playoff time. I for one, can’t wait to see which captain is handed Lord Stanley’s Cup come June.