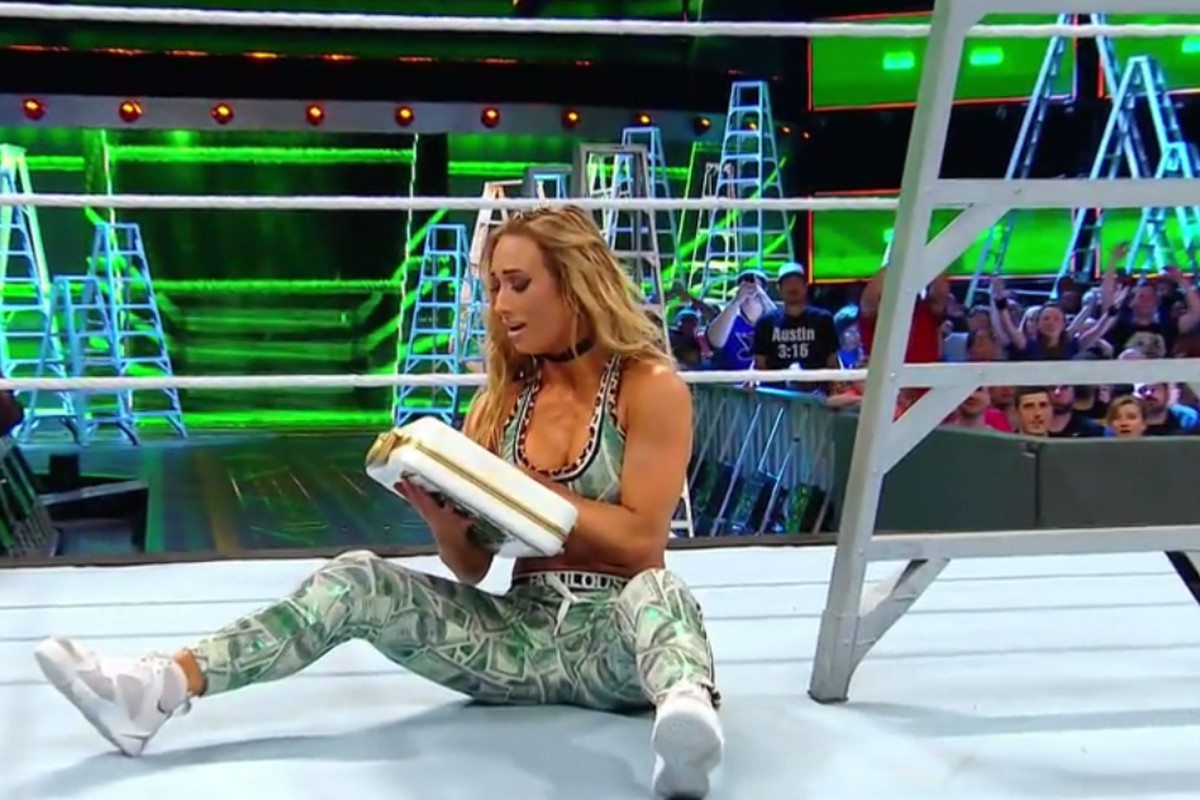 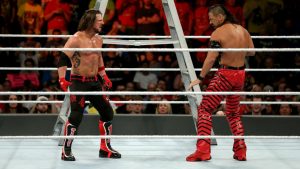 James Freakin Ellsworth.  Did that actually happen?  WWE Money In The Bank is in the books for 2017 with a controversial finish in the women’s MITB match.  Normally, I’ll bundle this in with RAW and Smackdown, but I just can’t wait until Wednesday to give my thoughts so let’s talk about the big moments from the night.

Women’s Money In The Bank

This match was highly promoted as a historic first time ever match that will go a long way in putting the women’s division on the same level as the men in the WWE.  The women delivered an extremely entertaining match and the spectacle of seeing Tamina or Charlotte wielding a ladder wasn’t lost on me.  I believe this match had a predictable winner (like most matches this night) in Carmella.  I said it last week on here that she would be a logical choice to win the first ever match.  She’s a heel, which fits the MITB cash in rules of basically stealing the championship after the champion is incapacitated, and she could use the win to help establish herself.  Carmella is still relatively new on the roster and while she’s had some big-name opponents such as Nikki Bella, her win and eventual cash in on the champion, will establish her as a top tier competitor.

So while this outcome made sense to me (and I assume to most of you) everyone is ENRAGED over the finish.  Why?  Well, while all the competitors were knocked out, Carmella’s manager, James Ellsworth (who even I’m bigger than), climbed up the ladder to grab the briefcase and dropped it to Carmella and the referees declared her the winner.  As a heel, Carmella winning in a dastardly way makes sense, however, from what I have to imagine females may be feeling, this didn’t feel right.  For me, this felt like a hyped women’s insane first time ever ladder match…only to be technically won by a man.  I’m a believer that many of the time, fans look too much into some scenarios by over-analyzing it, but this felt like a step too far.  Ellsworth could have helped Carmella up and maybe even carried her up the ladder to help her win, but then…wouldn’t it be pretty much the same thing?

So we are left with some nuclear heat on a heel challenger for the Smackdown Women’s Championship.  Twitter, which is filled with smart fans, were actually angry that Carmella won this way.  Advantage: WWE.  Even if this may blur some female equality lines a bit, Carmella is going to get over with some major heat from the WWE fans.  I can’t deny from a booking perspective, this was the right call.  In the end, if Carmella is now a legitimate member of the roster, the positive outweighs the negative.  Now if next year Ric Flair climbs the ladder to help Charlotte win…then we’ll have to revisit this.

I’m just so disappointed about the finish here.  The first time Randy Orton and Jinder Mahal squared off, Orton was distracted by both of Mahal’s henchmen, the Singh Brothers, causing Mahal to pick up the victory.  I must be having deja vu here because the SAME EXACT THING happened on this rematch.  Orton, frustrated by the Singh Brothers, ran around the ring and hit some RKO’s on announcing tables, however, the second he entered the ring again, ran into Mahal’s finisher to pick up the victory.  Lame.  What’s next for Mahal? Could a returning John Cena be on the horizon for SummerSlam?

Go after Cowboy Bob, and THIS is what awaits you, @SinghBrosWWE! #MITB #WWEChampionship @RandyOrton pic.twitter.com/RKTBtcdO4p

From a crash and burn standpoint, this was a hell of a match.  Some highlights included, AJ Styles hit an Attitude Adjustment on Kevin Owens on a ladder or when Nakamura hit like 100 Kinshasa’s on everyone, but the big moments were had by Sami Zayn and AJ Styles.

Sami Zayn had himself a moment when he climbed to the top of the ladder with Dolph Ziggler and AJ Styles (who was involved in almost every big moment), where Styles was knocked off the ladder and Zayn hit a sunset flip powerbomb on Ziggler off of the ladder!  You need to see this:

A POWERBOMB OFF THE TOP OF THE LADDER! @iLikeSamiZayn is throwing caution to the wind in this #MITB #LadderMatch! @HEELZiggler @AJStylesOrg pic.twitter.com/IHbT2SVM2B

While that may have been the craziest spot of the match, AJ Styles brought another must-see moment to the mix.  Styles climbed the ladder and actually grabbed the briefcase and hook, which usually only happens when someone wins, Ziggler removed the ladder from under Styles causing him to hang from the briefcase in the air.  Styles made an attempt to try and unhook the briefcase before falling, but failed, causing him to fall to the mat.  This wasn’t pretty and I was actually worried for Styles, but glad he was okay to finish the match.  Also, props to the commentary making it like he slipped before falling.

As for the non-car crash moments of the match, Shinsuke Nakamura was taken out of the match during his entrance by Baron Corbin.  Later, Nakamura would return and lay out every person in the match with his Kinshasa move except for Styles.  I loved this as it made Nakamura feel special by making a strong return to the match and dominating, rather than an ordinary guy in the match that gets knocked down and rests for 10 minutes.  The highlight of his return was when Nakamura and styles teased a climb to the top of the ladder, then moved it aside to brawl one on one.  This was so over with the crowd and a great moment.  After their battle, they did eventually climb to the top only to be knocked down by Baron Corbin.  This paved the way for Corbin to climb the ladder, rung by rung, and snatch the briefcase for the victory.

I enjoyed both ladder matches, but the finishes left more to be desired.  For the women, Ellsworth grabbing the case felt wrong, but maybe this worked and for the men, Corbin just casually knocking both men off the ladder for a regular fall wasn’t exciting enough.  Either way, the briefcase holders always work better with heels because of their diabolical cash-ins so that should create some excitement going forward.

As for the card, heels dominated by either winning or retaining their titles almost every time.  The tag titles remained with the Usos over New Day after a count out, Jinder Mahal retained against Orton and both MITB winners were heels.  The only major babyface winner was Naomi defeating Lana for defend her championship. I’ve never been the biggest fan of rooting for the heels, but I have to imagine if you are, you can’t hate on the results of this one.

Before I go, one last quick shout out to another EPIC Fashion Police Segment, featuring the return of Paul Heyman’s 1980’s cell phone marked “property of Paul E.”  Heyman used to go by Paul E. Dangerously in WCW and this little homage was amazing. 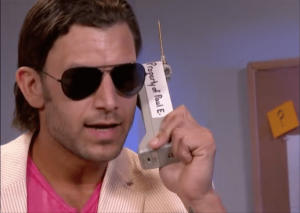 This is one Dangerous Alliance