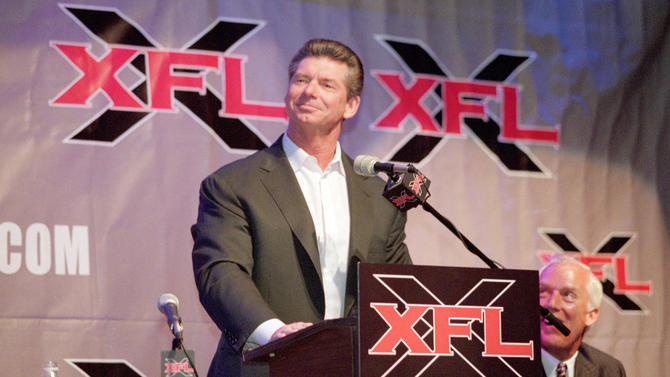 At the end of ESPN’s recent “30 for 30” documentary on the XFL, WWE owner Vince McMahon and former NBC Sports chairman Dick Ebersol — the men who spearheaded the failed early-aughts competitor to the NFL — mused about possibly giving it another go.

“Do you ever have any thoughts about trying again?” Ebersol asks McMahon, per Pro Football Talk’s transcription.

“Yes, I do,” McMahon replies. “I don’t know what it would be. I don’t know if it’s going to be another XFL or what it may be or how different I would make it. It seems like in some way it would tie in either with the NFL itself or the owners.”

Shepard didn’t provide much in the way of follow-up to that tweet, but Deadspin’s David Bixenspan asked a WWE spokesperson about it. The wrestling company neither confirmed nor denied that McMahon was starting a new football league, but it sure seems as if he’s thinking about it, at the very least. – Washington Post

EXCLUSIVE: Vince McMahon is looking to bring back the XFL and may announce it on January 25th, 2018.

EXCLUSIVE: Vince McMahon told people in WWE that he developed the desire to bring back the XFL when he was doing the ESPN 30 for 30 documentary on it.

WWE employees have been told internally to “get ready” because it is coming.

A WWE spokesperson issued the attached statement to me & @Deadspin in response to my inquiry about tonight's rumors of a soon to be announced XFL revival. They declined further comment. Whatever Vince McMahon's "Alpha Entertainment" is, it's self-funded & separate from WWE. pic.twitter.com/oT0Oxyi2fV

In what I’m sure is a complete coincidence, WWE filed for two new XFL trademarks this year, both long after the 30 for 30 premiered.

First of all, let’s give this dude Brad Sheppard some huge props for breaking, which is guaranteed to be one of, if not the biggest sports story of 2018 before it has even started. Hope he’s able to ride the wave on this one. Always like to see the smaller guys get these monumental scoops.

But Vince McMahon, you sick, beautiful Alpha male son of a bitch! He’s still got it. Just as you think the WWE has kind of hit a wall with not much room for progression, or at least the amount its accustomed to, BOOM, Vince drops this bomb. Now while there’s been no official announcement of this from Vince or WWE, there are a number of signs that point to this happening. Some of which are mentioned above.

While the XFL was a massive failure in its first go around, from what we saw in the 30-30 documentary it was all avoidable mistakes. It was a series of bad breaks and quick decisions that snowballed into the ultimate demise of the XFL. It was really doomed before it even started. The world just wasn’t ready for it, although no one knew it at the time. But now? Now could be just the perfect timing for the XFL to make a triumphant return.

Now I don’t think the original XFL can make it nowadays either, but if they don’t catch those bad breaks and have some better more calculated decision making this time around, the XFL has a chance to carve out a nice little niche for itself, in a number of ways. So let’s go over them.

First, its no news the NFL has taken a hit this year from pretty much every angle of the financial and social perception spectrum. It’s being viewed as the No Fun League now more than ever. It’s a game and a league built on calculated and controlled violence with a league doing everything it can to make the game less violent. Yes, I understand player safety is the ultimate concern but at the end of the day, the fans don’t really give a shit. They want and need the violence to stay interested. They believe the players know what they signed up for and for the money they are being paid, no NFL player has any right to complain about potential injury and health risks.

While someone never wants to see their favorite athlete or anyone for that matter sustain a serious injury, to an extent, the fans gripe with this issue is legitimate and warranted. The XFL with its no holds bar, all out all the time extreme attitude, could bring a nice change from the NFL, making up for lack of player talent in big hits and even bigger celebrations.

The other way the XFL could be successful is a replacement for college football. For all the trouble the NFL is having right now, its minuscule to the difficulties the NCAA is going through. The NCAA serves no real purpose, especially to the top players and especially the top schools and people are starting to realize it more and more every day. If the XFL can create some type of alternative option to college football where top high school players can come in and play for 2-3 years while getting paid and also getting top-tier media exposure, it could be a win-win situation for everyone. They could offer the players some form of insurance policy along with their contracts or even a scholarship to a school if they choose to forgo the NFL or not get drafted. Obviously, something that needs hammering out of fine details but the concept is there.

All in all the XFL has a chance at a revival if they can avoid many of the glaring mistakes they made the first time around. They must first find the niche they are gonna go after, the angle they’re going to take in creating it. Whether it be a full NFL alternative or somewhat of a secondary development league for aging players, players on the cusp of NFL talent and top-tier high school players alternative to college. The WWE will have to put the focus on quality football this time around. Treat it more like a professional sports league rather than an extension of the WWE with a football. The lack of training time and lackluster coaching staffs were a big problem last time around. Two easily fixed issues.

While all of this is speculation right now, what we do know is that Vince McMahon is the king of striking while the iron is hot. He doesn’t fail often and the original XFL was probably the biggest failure of his career, so if he’s making a legitimate second run at this whole thing, then he must be sure he’s got a good chance to knock it out of the park.