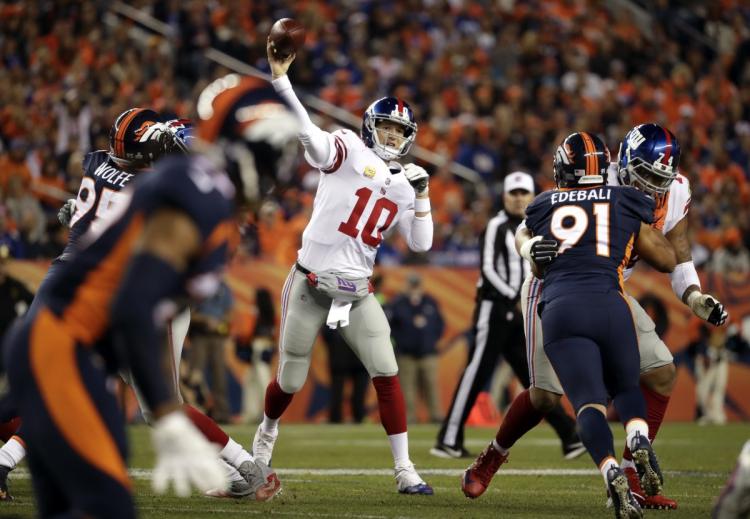 Eli Manning led the @Giants to an impressive victory on #SNF over the @Broncos. #NYGvsDEN https://t.co/VHthfqXCQJ

What a ride its been for us Giants fans this year. From Super Bowl hopefuls to waiting for the prodigal Jew Chosen Rosen to come to the east coast next April. While there still remained remanence of hope through the first 4 losses, last week, after turning the entire receiving core into a game of operation, it’s done. There’s no coming back from that. As great as it was from a one-game fan standpoint to watch how they played tonight, it’s not sustainable. Sunday was a perfect storm.

I didn’t want the Giants to go 0-16. That carries too much of a stigma and will have questions surrounding it get carried over into next season. This Giants team, though playing terribly thus far this year, is still loaded with young talent which will be the core of the team for at least the next 4-5 seasons. So while I would love the first pick, I’d be happy with top 5. A nice 1-15 or 2-14 season would do the trick. That would leave the Browns, more than likely, as the only team ahead of the Giants in the draft. Based on historical data, I’m as certain as I possibly could be that the Browns will not make the correct selection at QB. Banking on that list of 28 growing to 29 or even 30 by next season is the lock of the century. The line on that would be about -400000.

The Giants getting a win or a couple on the year was needed and expected. So winning any game isn’t necessarily the bad news, it was winning this particular game. Do you know how many great teams, go into Denver, and get trounced in that Mile high air? Basically all of them. It’s the only mile high club you don’t want to be a part of. It’s the type of game that builds momentum. The type of game that can turn a season around. But it’s too late for that. The Giants rolling off 4 wins in the next 6 games is worst case scenario here. The Giants need to sit back, get everyone healthy, lose 13-15 games and get ready to usher in the new era of Josh “Chosen” Rosen.