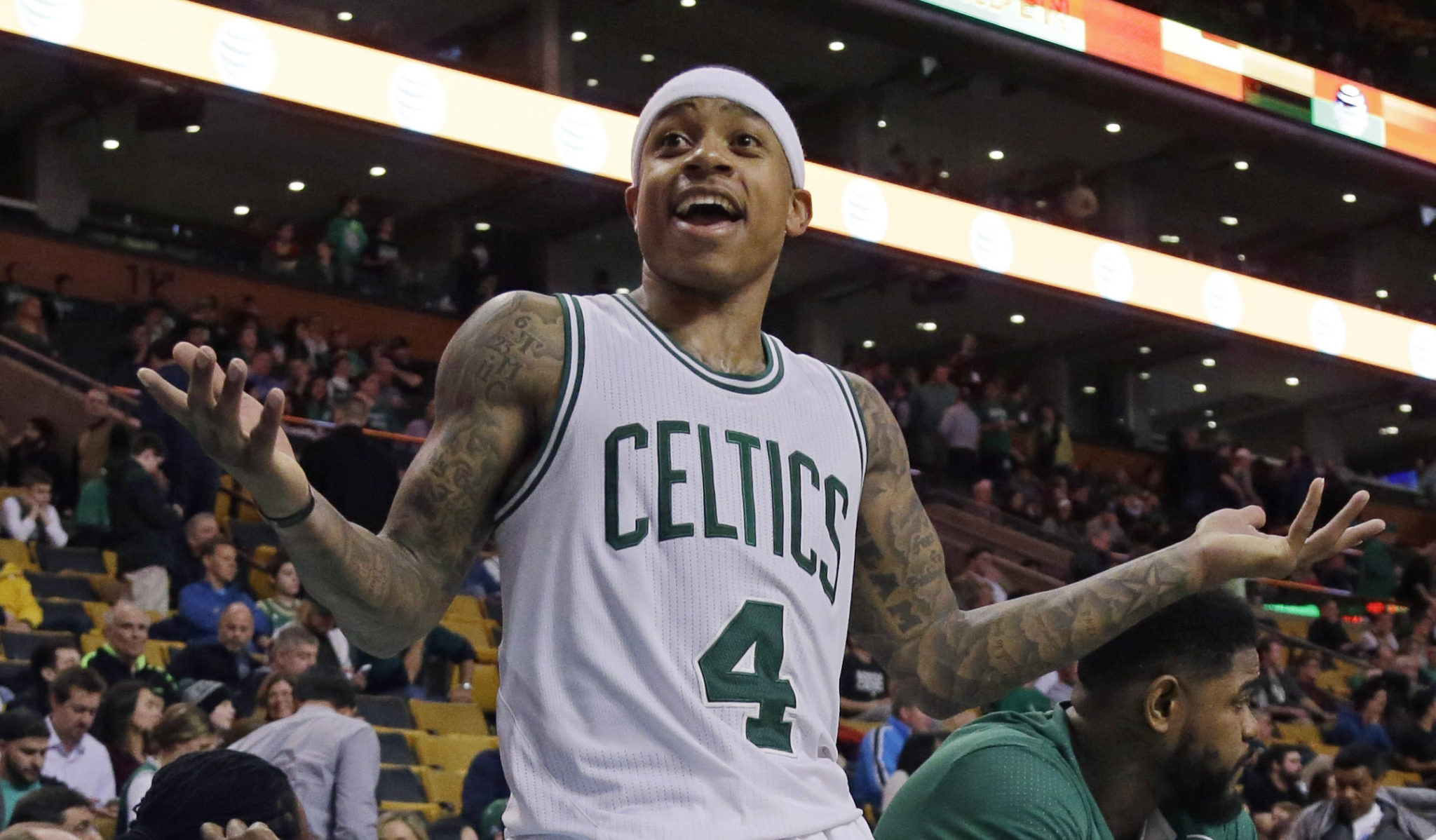 Isaiah Thomas burst onto the scene in Boston last year after being largely overlooked for the first part of his career. This season he solidified himself as an effective NBA player. Proved he belonged. That he could exist amongst the trees. Thomas, a diminutive 5 foot 8 inches tall even (laughably) got some MVP talk this year. Everyone that knows basketball though (outside of Boston) knows that Isaiah Thomas’ success is a ruse. A Fugazi. It’s unsustainable and it’s already starting to show. Like I said, if you know basketball, this isn’t news to you. For those who aren’t yet caught up to speed on what I’m referring to, here’s a little fact for you. Isaiah Thomas is the worst defensive basketball player in the NBA. That’s not my opinion. It’s a statistical fact.

Now I bet some of you are sitting back saying, “Jones, you’re an idiot, you’re insane. The Celtics were the number one seed and went to the Eastern Conference Finals this season, how could Isaiah Thomas be bad for the Celtics?” Well, my friend, “Men lie, women lie, but numbers don’t.” I look at the numbers and the numbers clearly confirm this theory. People still looking at points, rebounds, assists, and mainstream per game statistics are simpletons. Those numbers are not only inefficient, they are almost flat out useless when determining a player’s true worth and effect on his team. You could score 40 points a game, but if you’re responsible for giving up 41, then that 40 a game is as useful as a poopy flavored lollypop.

In the back half of the season and during the playoffs, the rest of the NBA started to realize and exploit this major deficiency in Thomas’ game. Stevens had his hands tied. He was forced to keep Thomas on the floor for his scoring abilities but had to find a way to hide him on the defensive end. Always guarding the opposing team’s worst or least lethal offensive player. Regardless of size or position. Thomas being 5’8′ didn’t exactly make that an easy task. And guess what? It showed in the numbers.

I’m gonna take you through a deep dive of all of the Celtics offseason options surrounding the NBA’s worst defensive player. From keeping him, to what to do with the 1st pick, to what they could get in return for Isaiah and how that affects their cap space.

Let’s first set the stage with some numbers and facts for the Celtics going into the offseason.

Don’t trade Isaiah. Yes, this is an option. Not a smart one, but an option. This option has to do with their decision around the number one pick. If they keep Thomas they don’t need to take a PG at one. Maybe they look to Phoenix or Philly or Sacramento and trade the number one pick for their two picks. They could move back anywhere in the top 4 and get a guy they want or need if they elect to pass on a PG.

Or they draft Josh Jackson or Tatum at #1. The Celtics need a wing scorer who can go out and get a bucket for them. Jae Crowder is a nice player and good defender but far from the star scorer on the wing that they need. They also need someone to help cover Isiah’s shortcomings after he gets beaten off the dribble. Ultimately I’d go with Jackson at one because of his instant elite defense if they keep Isaiah, but Tatum’s length is tempting in today’s NBA.

Trade Isaiah, Draft Fultz and sign Gordon Hayward. As noted above the Celtics will have roughly $29M in cap space this summer. Which they could use to pair up the old tandem of Brad Stevens and Hayward from the Butler days. Hayward fits the need for a big time wing scorer in Boston and is a formidable defender. Drafting Fultz gives the Celtics a point guard for the future. a big athletic point guard who can bang in today’s NBA, and can fill all the needs Isaiah brings on the offensive side of the ball and oh yea, he’s not the worst defender in the entire NBA.  Isaiah is 29. The window with him, even if he’s great isn’t as long as it is with Fultz. Even if they take a step back next year, they’ll be better off in the long run. The Celtics should be thinking big picture and life in the Eastern Conference after LeBron James.

Trade Isaiah for Paul Geroge or Jimmy Butler. Butler and George are probably the two most talented players possibly available via trade this offseason. Both top 15 players anyway you cut it. Both play on both sides of the ball. Talking All-NBA defense here. They both get the Celtics that star on the wing they’ve been missing since Pierce left. Both are an upgrade over Gordon Hayward as well.

Now the question is, what do they give up for them. I would consider the asking price to be somewhat similar. At least in the same ballpark. Isaiah Thomas is definitely in. But Isaiah only makes $6.2M. The Celtics might have to include someone else in order to sweeten the pot and bring salaries to a more even level, though both sides will have cap space come July 1. They would probably include either Jae Crowder or Marcus Smart who make $6M and $4M and change respectively. Both would improve the Pacers/Bulls and would still leave the Celtics with some cap money to play with.

They use this cap money to strengthen their bench. Depth was not a strong suit of the Celtics this year. It showed late in the playoffs. But Isaiah Thomas isn’t gonna get them there. They need to include Draft picks. Now, of course, they will want the number one pick this year, but honestly, I think that would be the Celtics giving up too much. Ainge should try and offer the Nets pick in the 2018 draft. The Nets will most surely be one of the three worst teams in the NBA next year. If I was a betting man, which I am, I would bet the house the Nets are the worst team in the league next year.

If the 2018 Nets pick, Isiah Thomas and Smart/Crowder isn’t enough. Try adding in a couple of their second rounders. The other option brings in a scenario from above. Trade the #1 pick to the Sixers or Kings for their two picks and swing the better one of those in the Pacers/Bulls deal.

Option 5: Trade Isaiah for another top pick. Maybe Philly or Sacramento will be willing to part with their second first-round picks. Then again in a deep draft like this Isaiah Thomas isn’t worth a top ten pick. Maybe someone like the Blazers, who own three first round picks. This move would free up a few million more in cap space. Then you have Fultz as the point guard of the future. Another first round pick and a whole boat load of cap space. This leaves plenty of money to grab Hayward and another top tier free agent. Maybe someone like Paul Milsap if he’s willing to take a little less money.

All of these are viable options. All of which could be slightly tweaked and twisted based on situations. The NBA offseason is completely unpredictable, but if I’m Danny Ainge, these are pretty much the main options I have laid out. Isaiah Thomas is a liability and Ainge knows it. The only question that remains, will he be smart enough to admit it before its too late.