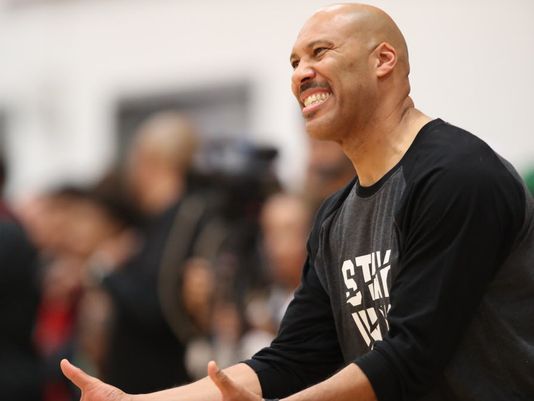 LaVar Ball isn’t an active baller, but he did just sign an autograph deal.

The brash, outspoken father of NBA draft prospect Lonzo Ball signed 200 cards with his name and face on them for Leaf Trading Cards. Financial terms were not disclosed. “This wasn’t all about the money,” said Ball, who signed the cards at his California home Friday. “I think it’s cool to have a card.” The cards were sold Wednesday on eBay, starting at 1 p.m. ET, at a fixed price of $59.95, said Leaf CEO Brian Gray. The cards sold out by 1:01 p.m. Each card is inscribed with one of Ball’s sayings, such as “$495 ain’t enough,” and “If you can’t afford the ZO2’s, you’re not a big baller,” a reference to his son’s signature shoe price. Another card says “$1 billion was a discount,” referencing his demands of the shoe companies, who turned down his overtures to create a partnership with the company he created. When a person clicks to buy a card, he or she did not know which phrase it features.

Perhaps the most sought-after cards will bear the sayings, “Lonzo better than Steph Curry!” and “Stick to the donuts, Chuck!” a shot at NBA Hall of Famer and current TNT analyst Charles Barkley, who has ripped Ball in the past. “The fact is that LaVar Ball is a significant pop culture icon,” Gray said. “My job is to create a collectible element for personalities like him. We’ll now see if the market is real, not based on what people will pay to first buy them, but what they will resell them for.” The deal was negotiated by Matt Palmer and James Sullivan of 11Media Group in Las Vegas. – H/T ESPN

Talk about capitalizing on momentum. LaVar Ball continues to do everything in his power to reach mogul status, or die trying. Having your own playing cards. That’s the dream, that’s the childhood fantasy. The Baby Boomer version of the blue Twitter check mark. The next logical step in his journey in his mind. LaVar is new to this social media thing. He was verified within minutes of creating his accounts. It might have already been verified upon creation. That means nothing to him though. He went his whole life without social media. LaVar just wants his face on a playing card. Doesn’t matter if he’s not an actual player. He’s promoting his stardom.

This is LaVars verification. This is his blue check mark. You add in the rarity and uniqueness of having a different saying on one. a saying which you don’t know what you will receive. It’s a collector’s dream. LaVar Ball trading cards right now are gonna sell faster than OJ Simpson prison autographs. He’s that big right now. But you better flip that shit real quick. Lavar ain’t gonna be hot forever. Lonzo gonna have to play basketball at some point. If he doesn’t perform. There goes LaVar’s stardom. Those cards will drop faster in value than Beanie Babies.

Newsflash the 200 cards sold out in minutes. Let the clock start ticking to those lucky 200. The secondary market will be huge in the coming weeks. Get rid of that thing before it just becomes as valuable as some animal shaped fabric wrapped around some beads.