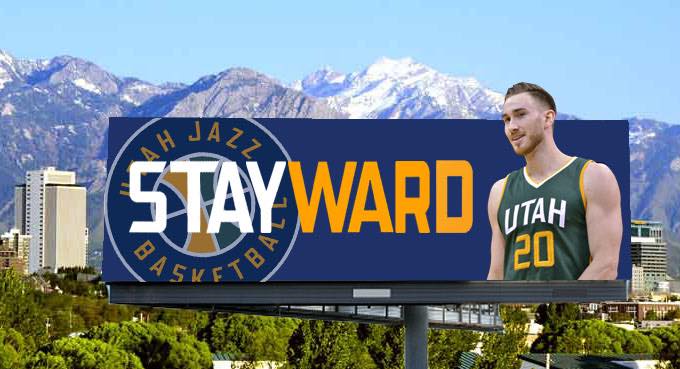 Gordon Hayward will be one of the most coveted free agents come July 1st. Rumors have been swirling about him leaving Utah for almost two years now. Why? Because he’s good and it’s Utah. Hayward can be a huge piece on a contending team. There are a few teams that can afford him but only really a group of three teams that he’ll really consider.

A return to Utah, a reunion with his college coach in Boston or the Sunny Beaches and sorcerer like abilities of Pat Riley in Miami.

Now it’s not often we at Bleacher Fan break any news, and that’s not what we’re doing here, but we do have the occasional connection. A source you might say. Speaking under anonymity (obviously), the source recently spoke directly with an active NBA GM about Gordon Haywards plans next season. The source confirmed Gordon Hayward if given the max contract offer plans to sign with the Miami Heat. Not what you expected right? Well, there’s a reason that goes beyond basketball. The source also indicated the reasoning behind the choice is Hayward’s wife, who is reportedly opening up her new business in Maimi. We were not provided details on the business but some quick research shows she’s in the beauty industry, so possibly some sort of Salon, if I had to take an educated guess.

People tend to forget these people have families that are taken into account when you’re moving across the country. When you’re getting paid the same amount of money in both places, other factors outside of basketball come into play. If Hayward had chosen or intended to choose Boston come July 1, I’m not sure why his wife would be opening a business in Miami. They have salons in Boston.

Despite the opportunity for a great reunion in Boston, it makes sense why they wouldn’t go after Hayward. They just drafted two small forwards back to back years in the top 3. If Tatum of Brown turns into anything the Celtics hope for then Hayward’s services won’t be that valuable to them. They need to improve their bench depth and their frontline. Their money would be much better spent going after someone to play alongside Horford. Even splitting that money up and adding 2-3 top-tier role players to really sure up their bench.

Hayward has already scheduled his first meeting, with guess who? Pat Riley and the Miami Heat. Sure, Boston and Utah are on the list, but Miami is first. Not a bad sign for our first crack at insider info.

Miami will have a TON of cap space this summer. With Bosh’s contract finally coming off the books and some quick cap maneuvering they will have the money to go after both Blake Griffin and Gordon Hayward. Riley is the best in the game at shedding cap space. He cleared ALL of the space to sign the Big 3 in 2010 in a matter of…..one night.

Miami wouldn’t even need to make crazy deals. A simple and easy trading of Josh McRoberts and Tyler Johnson will get them in the ballpark. From there maybe one of them decides to take a slightly less amount to make it happen. Similar to the deals structured of Lebron and Wade in 2010. Yeah, people might automatically think Boston is better because of their success last year. But I gotta tell you, that Miami team plus Griffin and Hayward or that Boston team with their FA money spent on someone not named Hayward, I’ll take that Miami team all day.