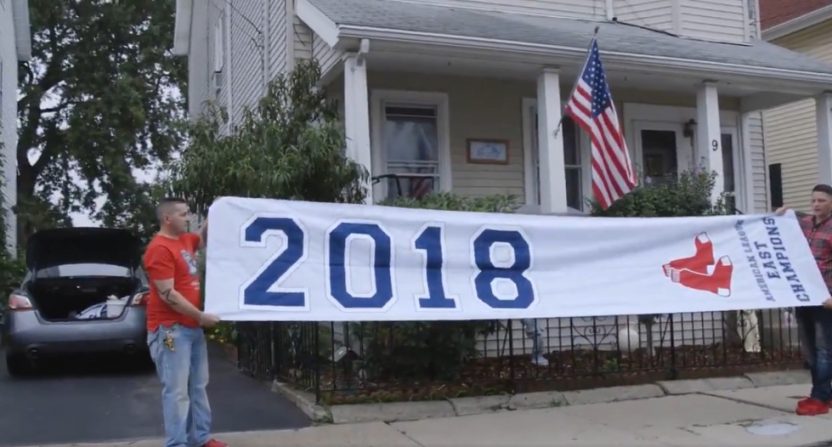 Nothing to see here, just two guys from Somerville who found the Red Sox 2018 division championship banner on the side of the road.

Okay, first things first, these guys are so ridiculously Massachusetts it hurts. The accents are absurd, these guys just don’t drop their “r’s,” they don’t even know that the letter “r” exists.

“Summahville doooooode”…everybody knows it doesn’t get much more Boston than Somerville.

Being from Massachusetts, I’m used to the accents and the way people speak, but these guys are caricatures. They sound like they should’ve been extras in The Town or The Departed.

Second, who in their right mind gets out of their car and crosses three lanes of traffic on a busy road to see what’s in a random box? Were they hoping Hanley Ramirez’s “friend” had left it behind and it was full of drugs?

Think about this…these guys saw a box while driving, probably mulled over what to do for 3-5 seconds, made the decision that stopping, crossing lanes of traffic on foot, and seeing what the deal with this box was, was something that needed to be done.

Jesus this was a lot to unpack.

But wait, it gets even better…they’re not giving it back, not without some kind of reward at least.

They threw out the idea of maybe getting playoff tickets in exchange for the banner’s safe delivery to Fenway. I believe the exact words were something along the lines of, “we’re not just gonna give it back, let’s negotiate.”

I just don’t think that’s enough. How about manager for a day? Or throwing out the first pitch? Bat-boy for the night? Screw it, let’s give part ownership of the team to these heroes.

Let’s negotiate? Buddy, do you really think the Boston Red Sox, an organization worth billions of dollars is not capable of getting another banner before the Sox win the division?

This was a team that was literally cursed for 86 years, to think they don’t have a back up already made is ludicrous. Get real guys.

Oh wait, they thought about that and said if the Sox hang another banner, they’ll bring the banner they have down to Landsdowne Street and let everyone know the one hanging off of Fenway is a duplicate. They also alluded to having other sources to give the banner to.

Again, a lot to unpack here. First off the banners hang on Jersey Street (formerly Yawkey Way). Second, who cares? What difference does it make if a division championship banner is a duplicate, we have 9 others that are original.

I could see if it was a World Series banner, we don’t have too many of those, but an AL East Champs banner? Give. Me. A. Break.

And as far as the other sources to do something with the banner, saying something like that is how you end up in a salt marsh in Southie bro. It’s no secret that there has always been organized crime in Massachusetts, but mentioning them in a Boston Globe video? Not a great move.

It’s obvious we have some wicked big Sox fans here. Very appreciated too. Appreciated so much, that the Red Sox have already said they won’t offer anything for the return and that they will just hang another.

A little piece of advice for all the readers, when you find something like this, don’t let the first thing you do be to alert the media and start making demands like you’re a Dr. Evil asking for a billion dollars.

But instead you get a whole lot of nothing.

Welcome to New England Josh Gordon, Now What What Will He be?
Jon “Bones” Jones Cleared By USADA For UFC Return After October 28
To Top