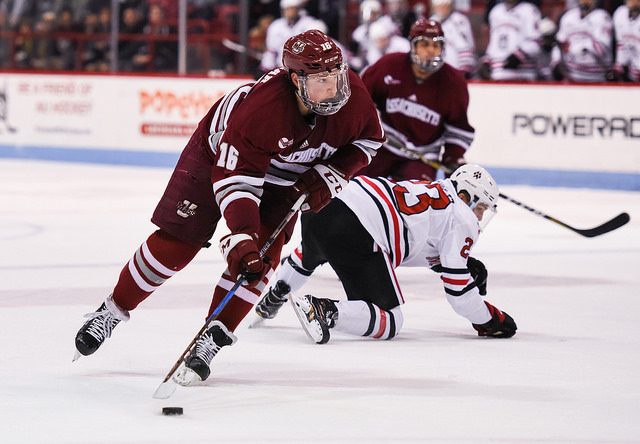 UMass hockey is off to an incredible start to their 2018-19 season. Starting the season the Minutemen weren’t even ranked in the top 20 of college hockey.

After seven games, they are now ranked ninth in the country. They’ve actually gone from not ranked to number nine in just three weeks.

Playing in the Hockey East division has proven difficult in years past for UMass, having to play against proven teams like Boston College, Boston University, and Providence College. Hockey East has been one of the most dominant conferences in Division one hockey for as long as I can remember.

A Hockey East team has appeared in 12 championship games since the year 2000. Those teams have won six times, and in 2015, Providence College actually beat fellow Hockey East member, Boston University, to win the championship.

This year, however, it is the Minutemen’s time to shine.

On the back of sophomore Mitchell Chaffee, who has a team-leading six goals, the Minutemen have had some impressive wins. The most impressive coming when they beat the number one ranked team in the country, Ohio State, as an unranked team. The win came on the front end of a back-to-back with the Buckeyes where they won the first game 6-1 but lost the second game 3-1, this would be their only loss so far this season.

UMass will be tested again, facing off in another back-to-back with Hockey East foe and number four ranked team in the country, Providence College.

A split of this series could cause a jump one or two spots in the rankings, but a sweep of this two-game set could propel UMass to a potential top-five spot in the national rankings.

A key to the success of the Minutemen has been their high powered offense and defensive discipline. Currently, UMass has outscored their opponents 30-13. Physical, effective defense and superb offensive awareness and chemistry has lead this team to one of the best starts in program history.

The Minutemen will look to keep their undefeated record at home intact when the Friars come to town and the top spot in Hockey East is up for grabs.