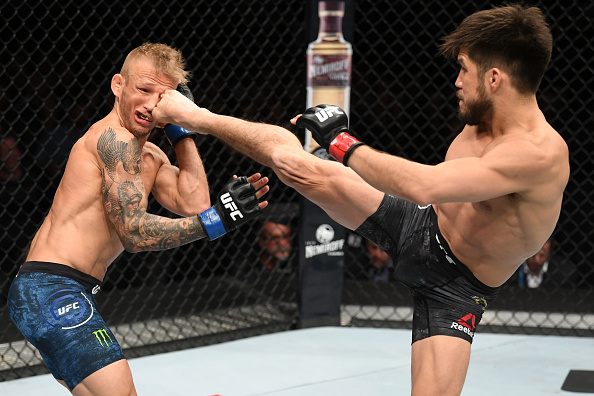 32 seconds was all it took for the baddest 125 pounder on the plane, Henry Cejudo, to beat UFC legend and Bantamweight Champion TJ Dillishaw by TKO at UFC Fight Night 143.

UFC Fight Night 143 in Brooklyn was already a historic event, being the first airing of UFC Fight Night on ESPN, which ESPN owns the television rights to for the next five years.

After a night of excellent fights, including Donald “Cowboy” Cerrone continuing his return to dominance in the lightweight division, we saw a super fight with massive implications.

Leading up to the fight, there was much speculation that if Cejudo were to lose the 125 pound belt, the flyweight division would be disbanded. It has been reported that Dana White has been looking to put an end to the 125 pound division for some time.

After a long night of build up, we saw “The Messenger” deliver a big time message; the flyweights weren’t going anywhere. Cejudo stopped Dillishaw just 32 seconds into the first round, the fifth fastest stoppage in history.

But, just because Cejudo retained, it doesn’t change the fact that there isn’t much competition at flyweight and most of the top ten at 125 pounds could compete at 135, the division Dillishaw currently sits atop.

With a somewhat controversial stoppage, TJ immediately expressed his frustration and on the spot in his post fight interview, Cejudo said he would fight Dillishaw again, at 135 pounds.

Another super fight would most likely be on pay per view and would be a big seller for the UFC, so it makes sense that this would be the next fight for these two, especially with no one really looking like they could challenge Cejudo at 125.

So even though he seemed to save the division by defending his championship, the future is still very uncertain for the flyweights and it wouldn’t surprise me one bit if Cejudo were to beat Dillishaw at 135, that the division was disbanded.

For the time being though, there is still hope. Now we wait on Lord Dana White to make his next move.