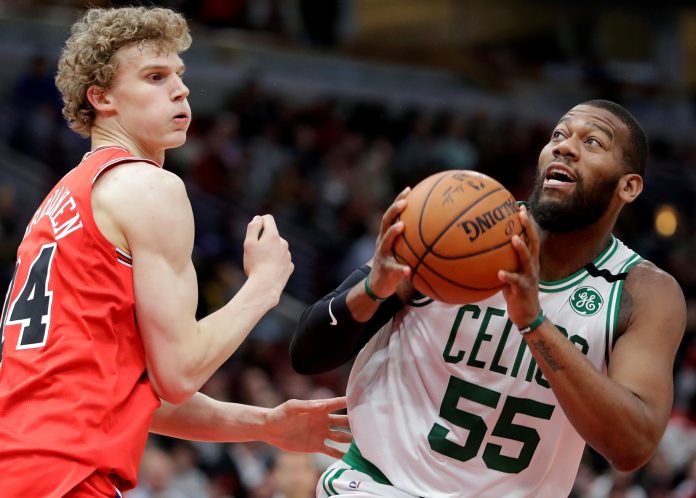 Coming off a heartbreaking 120-117 road loss against the league’s #1 team, the Houston Rockets, the Celtics bounced back and coasted to a 16 point win over the Chicago Bulls last night.

Led by the 2nd year stud, Jaylen Brown’s 21 points, 4 rebound, and 3 assist performance, the Kyrie-less C’s showed that they weren’t going to let the disappointing loss they suffered Saturday night affect their game. They capitalized on playing their sub .500 opponent in the Bulls and this game was never even close.

At halftime the score was 55-29, and it was all but over. Let’s be real, there was no way that the 21-41 Bulls were going to come back from down 26 points against arguably the best team in the East. Lauri Markkanen could take all the shots he wanted, the Bulls were no match for the Celtics even without Kyrie.

At one point the C’s were up 37 and I debated shutting my TV off, but I bleed green and there’s no way I’m gonna miss a chance to watch my team run train on the Bulls.

The other young superstar in the making, Jayson Tatum added 14 of his own points and remained as impressive as ever on both sides of the ball, highlighted by a huge block on the defensive end of the floor.

Terry Rozier and “Average Al” Horford each added 13 and were both forces defensively as usual. Horford although unimpressive at times has been a solid contributor and been invaluable in several wins this season and Terry is making a name for himself as a big-time scorer and lock-down defender in Kyrie’s absence.

Rozier has been one of the most impressive players off the bench this season. He is always ready to play and is willing to do whatever is asked of him to help the team. A perfect example of this is when he was starting when Kyrie was out for a short stretch with a minor leg injury. His biggest contribution came against the Atlanta Hawks where he dropped a career-high 31 points.

This win keeps them at 1.5 games back of the 1st place Toronto Raptors. With matchups against the Timberwolves, Pacers, and Wizards, the C’s have their work cut out for them over the course of the next week and will need to continue winning while the Celtics diehards keep their fingers crossed that the Raptors hit a skid and we can reclaim first.

With Cleveland 8.5 games out of 1st and 7 games behind the Celtics, they are not much of a threat right now. But as Sully mentioned on this week’s episode of  “The Extra Point” podcast, if the Celtics finish 2nd, they will likely have a 2nd round playoff matchup with the Cavs. That is not something I want. Having to play the Cavs and most likely the Raptors back-to-back would be a daunting challenge for any team.

Nevermind the fact that you’ll have either Golden State or the Rockets waiting for you on the other side for the finals matchup if you manage to get through Cleveland and Toronto.

1st place is something that we usually say doesn’t matter, but this year it could matter more than ever for the Celtics. Finishing the top spot in the East could make the road to the finals a hell of a lot easier, and I am all for getting there with as much gas left in the tank as possible.

If you haven’t yet, check out Bleacher Fan’s podcast, “The Extra Point”, hosted by Reyes with Sully, Jones, and Myself. We have new episodes out every Sunday night and bring the humor of the fan in the bleachers with the mind of the guys on the bench.

Link to this weeks episode below: