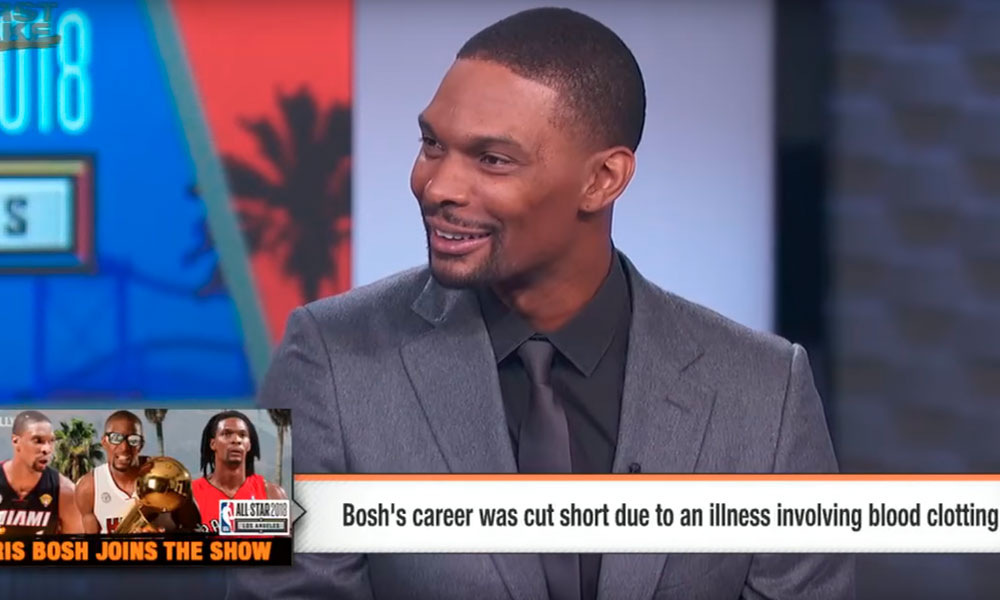 Comeback SZN, Johnny Football started it and it appears Chris Bosh wants some of what he’s having. Yes, the ex-Miami Heat star is planning a return to the NBA. Bosh last played in the NBA for the Heat in February of 2016 but had his career abruptly ended due to a severe blood-clotting illness. The condition was said to be so serious that it was considered potentially life-threatening back in 2016. Now though Bosh has a change of heart,  no pun intended. During an interview with “First Take” on ESPN Thursday morning he talked about his interest to get back out there.

“I’ve been in the gym,” he said. “I can still play basketball. No. I’m not done yet. Yeah, I’m trying to come back. Man, I see all these guys shooting 3’s and not playing defense, and, man, I’m saying I’ve got to get some of it.”

“Medicine is like law. That’ I’ve come to find out,” Bosh told “First Take” on Thursday. “It’s very gray area. Some people say yes. Some people say no. Usually it’s about what the majority agrees to, and usually sometimes it’ll take somebody to kind of have some revolutionary plan or something like that. I’m not going to be in a position where I’m risking my life, so if I ever get back on the court like that and people are worried, it’s not going to be a life-risking situation.”

Must say he does make some solid points here. Many things in the medical field are grey area time things and doctors just suggest you use caution. With that being said though, I can only hope he is right and that if he does come back the situation is not potentially life-threatening

CB4 also went onto say his top three teams to potentially play for are the Houston Rockets, Golden State Warriors, and the Toronto Raptors. Hmm this could get very interesting. I know it’s been a while but being a Miami Heat fan I remember the greatness of Chris Bosh and what he can bring to the floor. He was in large part one of the first stars to become a successful stretch 5. He constantly spaced the floor for others like LeBron and Wade while being a legitimate threat to shoot from the outside. I’m sure the Spurs know what I’m talking about.

What team do I think he goes to? It’s tough to say, he clearly wants to play for a contender. A return to Toronto would be very intriguing as that’s where he became a superstar. But realistically I don’t see it as the Cavs would still be able to beat them. This leaves the Warriors and the Rockets. He would be a huge addition to either already stacked team. I really hope he doesn’t go to the Warriors and he doesn’t have many strong ties with those players.

I think if he does comeback it’s to Houston, the team he was SUPPOSED to sign with before he re-signed with the Heat. There was mutual interest to play with James Harden. The addition of CP3 only helps that cause. He would give the Rockets another 3 point threat and solid big if still half the player he once was. Could he be the guy that pushes them over the top? Well, quite frankly I don’t think they need him. Contrary to most beliefs I think the Rockets are the better team and will dethrone the Warriors in the Western Conference Finals in 7 games.

I’d love to see Bosh back in the league but his health comes first. Chris Bosh is a great guy and player and will forever be a member of the Miami Heat. If he chooses to come back I wish him the best. However if he does come back the deadline to pick up a player to be eligible for the playoffs is March 1st. So realistically the comeback is unlikely for this season, but I wouldn’t be shocked if I saw him out there next year.