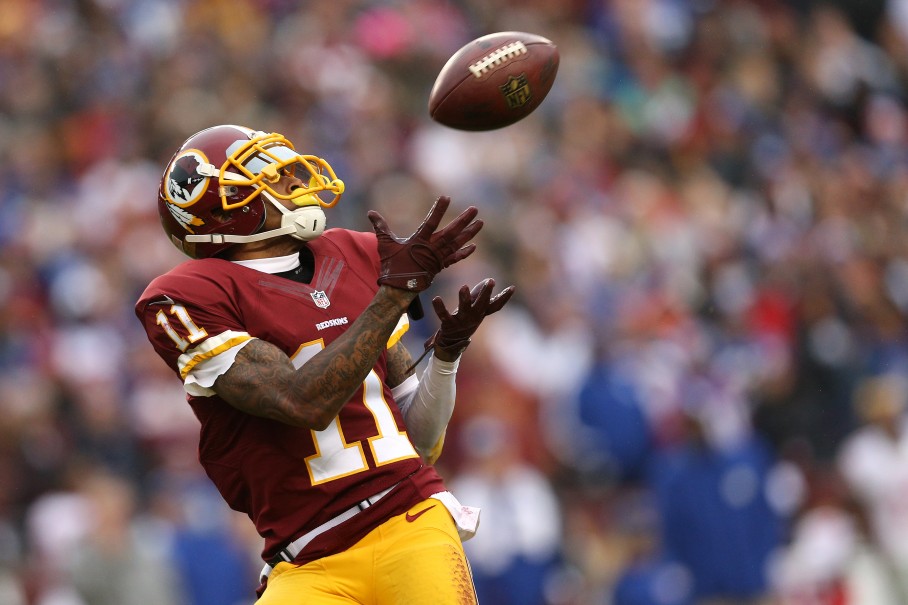 Quite frankly I don’t know what the Washington Redskins are doing. For some reason they don’t want to pay Kirk Cousins, you know the guy who threw for nearly 5,000 yards last year. Also, given both Piere Garcon and Desean Jackson being unrestricted free agents, things are murky, to say the least in Washington. Something tells me, DeSean Jackson wants out of there. He never seems to be happy where his team is and always has trade rumors swirling around him. I have a strong gut feeling that the Tampa Bay Buccaneers will both actively pursue him and ultimately sign the30-year old veteran free agent wide receiver.

DeSean had an interesting season last year, compiling 1,005 yards on 56 catches for just 4 touchdowns. A comeback year for sure after an injury-plagued 2015, Jackson demonstrated he’s still a big-play threat averaging 17.9 yards per reception. The four touchdowns are somewhat troubling, but then again the Skins don’t really look for him as much in the red zone.

I think Tampa is the perfect fit for him. Winston is one of the bright young stars at the quarterback position, as long as he stays out of trouble. Like saying stupid shit while visiting elementary schools and saying boys should be strong and loud and girls should be quiet. I wouldn’t say I’m a feminist by any stretch but I think I speak for everyone when I say, shut the fuck up Jameis. Still only 23 years of age and coming off a career-best 28 touchdowns the future is bright for Jameis and the Bucs. The Bucs surprised a lot of people last year going 9-7 even with an injured and ineffective (shocker) Doug Martin. The keys were their young defense coming along late and the Winston to Evans-connection. Mike Evans also just 23, is a massive receiver at 6″5 235 who quietly had one of the best years out of any receiver. Evans caught 96 balls for 1,321 yards and 12 touchdowns. If Evans game does have a problem it’s creating separation as he is not the most fleet afoot, he won’t burn you over the top with the old “Randy Moss Madden 2002 Hot Route” special. Who stretches the field and creates space for other receivers as well as taking the extra man out of the box? DeSean Jackson! That’s literally his forte, even when he doesn’t have huge games he’s still making a profound impact.

Jackson will open up so many things for them. Sure they have nice little receivers like Adam Humphries and a solid tight end in Cameron Brathe, but they’re underneath guys. Jackson will open up more for them and a Jackson-Evans duo would be essentially thunder and lightning. Evans being the thunder bodying smaller corners and making tough red zone catches. With Jackson being the lighting, taking the top of the defense and making big plays with his speed.

Another thing to consider is Jackson grew up in Los Angeles California. Now I don’t know DeSean Jackson but with that being said I’m gonna assume he likes the warm weather, another reason Tampa would be great for him. Tampa over Washington any day of the week for sure.

If the Bucs can add a back in the draft like a Dalvin Cook from Florida State and DeSean Jackson they could make noise in 2017. I’m not the biggest fan of Doug Martin and his inability to stay healthy, also getting up there at 28 for a back. With these moves and a couple additions to the defense, the Bucs will look primed for a playoff spot. In fact, it wouldn’t even surprise me if they competed for the division. DeSean Jackson, lighting in a bottle, off to the lightning capital of the World in Tampa, you heard it here first.

Why John Ross Isn’t Crazy For Not Wearing Adidas While Breaking The 40-Yard Dash Record
Terrell Owens Doesn’t Care What The Hall Of Fame Says, Buys His Own Gold Jacket With His Stats On The Back
To Top