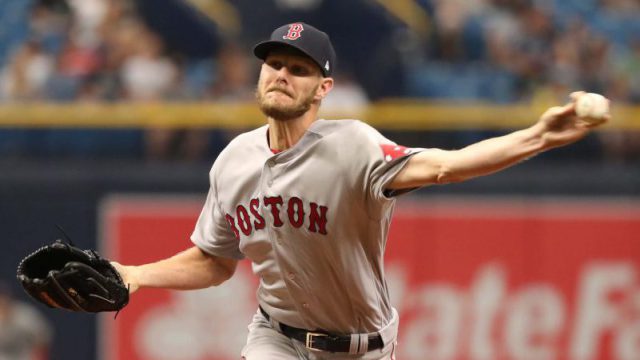 After 9 starts, Chris Sale is only 3-1. Not impressive for a perennial Cy Young finalist, but let’s take a deeper look at this legitimate Ace.

Coming off one of his best seasons where he threw an MLB best, 308 strikeouts, which was 40 more than any other pitcher in the league. Along with his massive amount of strikeouts, Sale finished the year with a 2.90 ERA and a stellar .97 WHIP. Ultimately, he was gassed come playoffs time and performed pretty horribly in the postseason.

In order to combat late-season fatigue this year, the Sox have been excellent about limiting his innings, until Friday night that is.

Going into his 9th and most recent start Friday night, Sale was only pitching an average of 6.1 innings and 99.3 pitches per appearance (lower than his 107.1 from 2017), but his pitching was too good Friday to take the ball out of his hands.

This guys dealing and just destroyed the Blue Jays, striking out 15 batters over 9 innings pitched, where he let up 3 ER’s on 6 hits and had 0 walks. The trend of no run support on night’s Sale pitches continued, however, and the Red Sox lost 5-3 after 12 innings, and Sale got yet another no-decision.

I’m starting to feel worse and worse for this poor guy. He has gone out for 9 consecutive starts and not allowed more than 3 runs, meanwhile, he is 3-1 and 5 no decisions. If he could get the run support he could easily have at least 5-6 in the W column.

Aside from his start against the Yankees back on April 10th where the Sox won 14-1, the Red Sox have averaged just above 3 runs per game, in games where Sale pitches.

I don’t know if you’ve seen the Red Sox offense this season, but they score a ton of runs, sitting in second in the league in runs scored with 208, just 10 behind the league-leading and division rival, Yankees. They do however lead the league in hits, doubles, batting average, OPS and total bases.

They just can’t seem to get it together on nights when their Ace is on the mound. Thankfully he hasn’t let the lack of offensive support affect his game at all. He has already fanned 78 batters this year and has continued to be one of the MLB’s best pitchers.

Just watch him toy with Toronto’s batters on Friday night, his slider was out of this world. (Sale is highlighted between 0:40-1:26)

How the Sixers Can Make It a Series Against the Celtics
Do The Celtics Actually Have A Chance At Beating The Cavs?
To Top