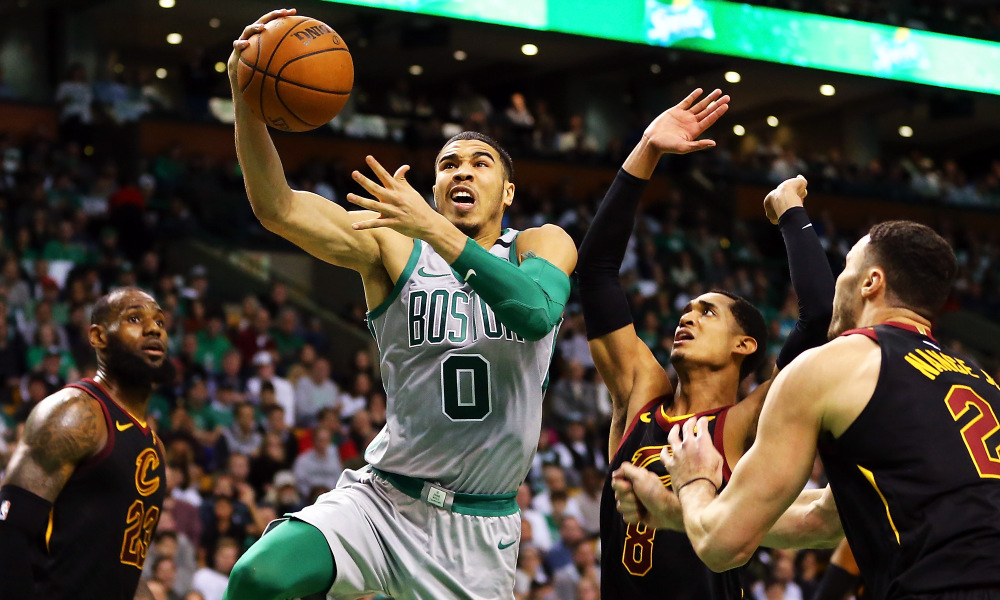 There has never been a team to make the conference final without their leading scorer until this year’s Boston Celtics.

Everyone assumed they were done the second it was announced Kyrie was out for the rest of the season, and I mean everybody. Hardly any expert had them beating the Bucks in round one, and I didn’t see one person pick them over the Sixers in the Conference Semi’s.

The lack of confidence in the Celtics didn’t seem to phase them one bit. They blew the Sixers out in the series and won 4-1.

Now don’t get me wrong, I respect the hell out of the Sixers and am so excited for the inevitable future playoff matchups between these two teams, but they couldn’t close out games down the stretch against the better coached C’s.

The Cavs are coming off of a sweep of the #1 team in the East, the Toronto Raptors. I know the Raptors are not a good playoff team and have been historically poor performing in the postseason, but the Cavs absolutely dominated them, capped off by a 35 point game 4 win.

Their leader and centerpiece of their team, Lebron James has had one of the best postseasons ever. Through the first two rounds (11 games) of the playoffs, James is averaging 34.3 points, 9.4 rebounds, and 9 assists a game. In that stretch, he also has two game-winning buzzer beaters.

Lebron is proving yet again, that he is the best individual player to step on the floor since Michael Jordan. That pains me to say because I hate the guy. I mean absolutely hate him, but there is no denying he is the best player in the league.

Other than some recent help from Kevin Love, this playoff run has been all Lebron. That’s fine against the Toronto Raptors who fall apart every year in the playoffs, but if you think it’s gonna be that easy against a Brad Stevens coached Celtics team, you’re wrong.

This is in my opinion, the best coach in the league we’re talking about. Aside from Love and Lebron, the Celtics are a better team than the Cavs and have an actual chance to beat them this series.

It’s a real shame Kyrie is injured because a Kyrie vs. Lebron conference final would have been legendary. Lucky for LBJ, his former point guard and the C’s leading scorer won’t be playing.

Thus far the C’s have relied very heavily on the high level of play from Al Horford, Terry Rozier, and their rookie, Jayson Tatum.

Tatum leads the Celtics in scoring with 18.8 PPG and has had 20+ points in each of the last 7 games. Some of the best rookie year playoff numbers for a Celtic since Larry Bird, one of the best Celtics players ever.

Rozier has excelled at point guard for most of the playoffs averaging 18.2 points, 5.2 rebounds, and 5.5 assists per game. Rozier has scored more than 15 points in 9 of the 12 games this postseason, proving to be an effective replacement for Irving. He has also shot 41.5% from the floor and 38.2% from 3-point range during this playoff run.

Which brings us to arguably the C’s most valuable player throughout their first two matchups, “Average” Al Horford. I love calling him that, but he has been anything but average.

The 31-year-old power forward has been killing it, especially in his matchup with Joel Embiid this past series. Horford has notched 17.0 PPG and 8.7 RBG on 57.8% shooting from the field. Al averaged 12.9 PPG during the regular season.

The addition of Marcus Smart back from injury during the Bucks series proved to be huge for the C’s on the defensive end. The tenacity on defense has elevated the Celtics and allowed them to make some big plays down the stretch against the Sixers.

I believe Stevens will develop a strong and tactical game plan on how to shut down the Cavs role players and putting the pressure on Lebron. We saw from the Cavs-Pacers series that if the rest of the team does not perform well, even with Lebron dropping 40+ points, the games were close and came down to the wire.

The Celtics are not only better coached than the Pacers, but they are more talented. If the C’s can only win at home, where they are 7-0 so far, this series will go 7, which will also be a home game and gives them a real chance to get over that hump that is the Cavs.

The biggest difference between the Celtics and Cavs this year is that the Celtics have surpassed all expectations being down their top 2 players, and have absolutely nothing to lose. The Cavs on the other hand, mainly Lebron have a lot on the line here.

This would be Lebron’s 8th straight finals appearance should the Cavs win this series. Not to mention, if he loses this series the criticism will be unreal. Could you imagine if the Kyrie-less Celtics led by Terry Rozier and Al Horford and a couple first and second-year guys beat the Cavs??

It would be chaos. Just imagine what it would do to that diva Lebron’s ego. He may never recover. It’s not because the Celtics are bad, because they’re not. It’s because the Celtics shouldn’t be in this series, the Cavs should come out of this and go to the finals for the fourth straight season, but what if they don’t?

At this point, I am all in on the Celtics and firmly believe they will take this series at least 6 games, and if they continue winning at home, it will go 7. At that point, they still have a home game, but it’s game 7 and it’s against Lebron, anything can happen. Including a Celtics win.

I don’t know what will happen this series, maybe the Celtics even get swept, all I do know is I can’t wait to watch it play out.